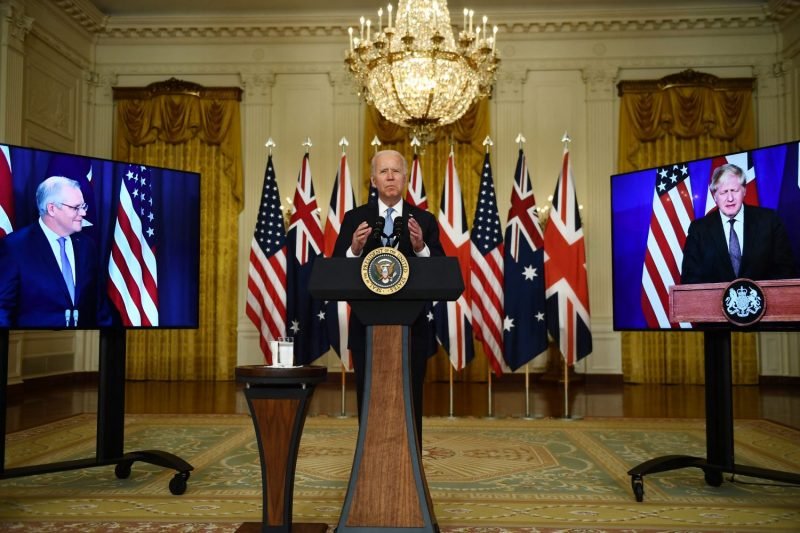 The AUKUS agreement between Australia, UK and US, marks a significant step towards the efforts to counter China’s increasing assertiveness in the Indo-Pacific countries. The agreement will allow Australia to build nuclear powered submarines (SSNs), with the help of the US and UK. The modalities of the deal were required to be laid out in subsequent 18 months after the signing of agreement. Under the agreement, the Royal Australian Navy (RAN) will get 8 SSNs. The trilateral cooperation will also focus on artificial intelligence (AI), quantum computing, cyber capabilities and undersea capabilities.

China, against whom the agreement is aimed at to deter its assertiveness by helping Australia  get SSNs, unsurprisingly has expressed its displeasure. Its Foreign Ministry spokesman said that the agreement “seriously undermines regional peace and stability and intensifies the arms race”.

However, Australia was bound to get 12 French Barracuda (or Suffren) class conventional diesel-electric submarines (SSKs). But, Australia withdrew from that agreement, thus inviting French anger. The French Foreign Minister called it a “stab in the back”. Also, subsequently signing the AUKUS agreement, France recalled its ambassadors from Australia and the US.

Since its signing in September 2021, AUKUS has received widespread attention. However, one needs to consider whether Australia really needed SSNs or French SSKs would have served its purpose.

SSNs or SSKs: Which are better ?

The biggest advantage submarines hold is stealthiness. It can remain hidden underwater undetected. That’s why submarines bring additional value to any navy over surface vessels. The propulsion system of submarines can be either driven by a nuclear reactor (in SSNs) or by diesel generator and battery (in SSKs). The kind of propulsion system with which a submarine is equipped determines its operational capabilities.

The kind of propulsion system determines the speed of a submarine. A SSN can operate at high speed for a longer period of time as compared to SSK, which needs to resurface after a considerable time to inhale oxygen for its engine. Thus, SSKs need for resurfacing makes it vulnerable by being detected, as for inhaling oxygen it needs to snorkel frequently. On the other hand, SSNs because of being driven by nuclear reactor do not need to resurface and can remain underwater for a long time, without refuelling. Speed, which is a key factor, gives advantage to SSNs over SSKs.

However, SSNs because of steam noise produced by nuclear reactor makes them susceptible to sonars and acoustics. This is not a problem with SSKs, which can remain silent. With technological advancement, SSKs are now equipped with air independent propulsion (AIP) systems which do not require it to snorkel for inhaling oxygen. Thus, the advantages held by SSNs from a long time are eroding with technological advancements.

SSNs because of their speed and range of movement are most useful for sea control. They are a crucial component of power projection capabilities. But, the question which arises is do Australia really need these SSNs ? Or French SSKs, which earlier Australia is buying, would have served its purpose ?

SSNs as noted above are best suited for power projection, as they can be used for supporting carrier strike groups, escorting surface vessels and also merchant ships. So, they can act as the guardian of the sea because of its overall mobility, a benefit which it gets because of speed and endurance. Thus, SSNs are a pivot component for sea control strategy, in which it can usher because of its operational features.

The Barracuda (or Suffren) class submarine is built by French shipbuilder Naval Group. Though Barracuda class submarines are nuclear powered submarines. But, Naval Group was building diesel-electric variant of it for the Royal Australian Navy (RAN), with lesser missile hosting capability. The RAN would have been acquiring 12 of these SSKs. However, the Australian government replaced this deal with the AUKUS deal.

These submarines are equipped with F21 torpedoes, which have a hitting range of over 50 km Another weapon which it carries is naval cruise missile, equivalent to Tomahawk land attack cruise missile. It can also lay FG-29 mines and is equipped with Exocet SM39 anti-ship missiles. It will also have ultra-modern sensor masts, which are non-penetrating meaning they don’t go inside the pressure hull. This makes submarines safer if periscope collisions happen.

Thus, considering operational features of  submarines (SSNs and SSKs) and strategic requirements for Australia, the French Barracuda class submarines would have been better. It would also have been cost saving, as five or six SSKs can be built in the amount which only one SSN is taking. Plus, Australia needs destroyers and frigates, which it does not have in substantial numbers according to its requirements.

Harshit Prajapati is a student of Master’s in International Relations and Area Studies at Jawaharlal Nehru University, New Delhi.