The first trilateral ministerial dialogue between India, France and Australia 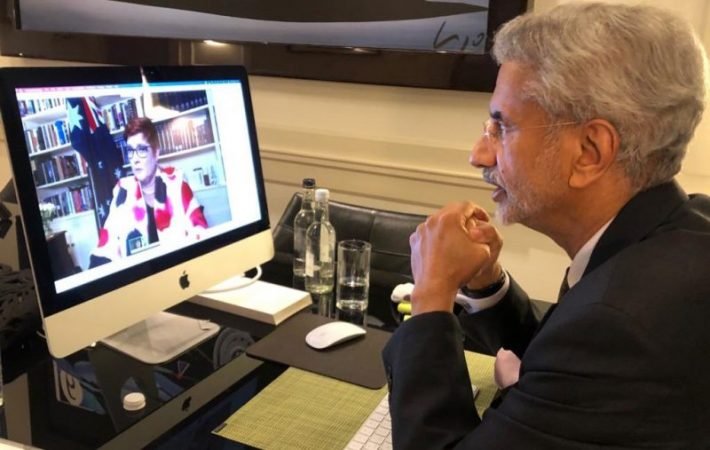 The United Kingdom announced in April that from May 3 to 5 it would host the G7 Foreign and Development Ministers for a COVID-secure conference. Besides the G7 countries of Canada, France, Germany, Italy, Japan, the United Kingdom, and the United States, foreign ministers from Australia, India, South Africa, and South Korea were also invited to Britain as special guests. The G7 conference is the first time the group’s foreign ministers have met in person since the outbreak. The event begins after a two-year hiatus, with the last one held in France in 2019.

On May 3, 2021, India’s External Affairs Minister, S. Jaishankar, began a four-day visit to London. The visit, which lasted from May 3 to 6, was primarily proposed to facilitate the union minister to attend a meeting of G7 world leaders in London, where India was invited as a guest country. Indian External Affairs Minister Dr S Jaishankar, French Foreign Minister Jean-Yves Le Drian, and Australian Foreign Minister Marise Payne organised the first-ever trilateral ministerial meeting in London. The trilateral ministerial dialogue was supposed to take place alongside the Raisina Dialogue in New Delhi, but it was postponed after Payne’s cancelled her visit due to the COVID-19 outbreak in India.

In September 2020 at the level of foreign secretaries, the France, India and Australia trilateral was launched with three joint priorities: maritime security, climate change, and multilateralism. Senior officials have met on each path since then, and it has now been upgraded to ministerial status.

Within a year of its inception, the trilateral mechanism is elevated to the ministerial level. The Indo-Pacific area inevitably piques the attention of the three nations. India’s Indo-Pacific Oceans Initiative (IPOI), which was launched in 2019, has France and Australia as participants. Last month, during the visit of the French foreign minister to Nevis, France’s participation in the IPOI was announced. During their first trilateral ministerial meeting, the three countries have agreed to work together to establish a free, transparent, inclusive, and rules-based Indo-Pacific, as well as to promote freedom of navigation, peaceful conflict resolution, democratic principles, and respect for sovereignty and territorial integrity. Joint naval drills like Varuna between India and France, Malabar Naval exercises involving India, Japan, Australia, and the United States, and La Pérouse – French naval forces with Quad member countries – have all been used to train naval forces from all three countries.

In the area of counter-terrorism, the ministers decided to collaborate via the forthcoming “No Money for Terror” ministerial meeting, emphasising the importance of collaboration in addressing threats to international security posed by disruptive cyber activities, as well as ensuring that technology essential to mutual security and development priorities are planned and implemented under public safety. The ministers sought to improve cooperation at multilateral organisations including the World Health Organization, standard-setting organisations, and the United Nations Human Rights Council. They also decided to work closely with the G20 on economic development and the response to the Covid-19. The three parties have urged knowledge exchange between the three countries’ humanitarian and disaster relief organisations.

The Indian side expressed gratitude to France and Australia for their help in the Covid-19 response, and the ministers acknowledged India’s role in supplying vaccines to different countries, both bilaterally and through multilateral processes such as the WHO-backed COVAX facility.

After the meeting, S. Jaishankar tweeted “Substantive discussions with my colleagues FM @JY_LeDrian and FM @MarisePayne at the first India-France-Australia Trilateral Ministerial Dialogue. Thanked them both for their strong support in meeting the Covid challenge”.