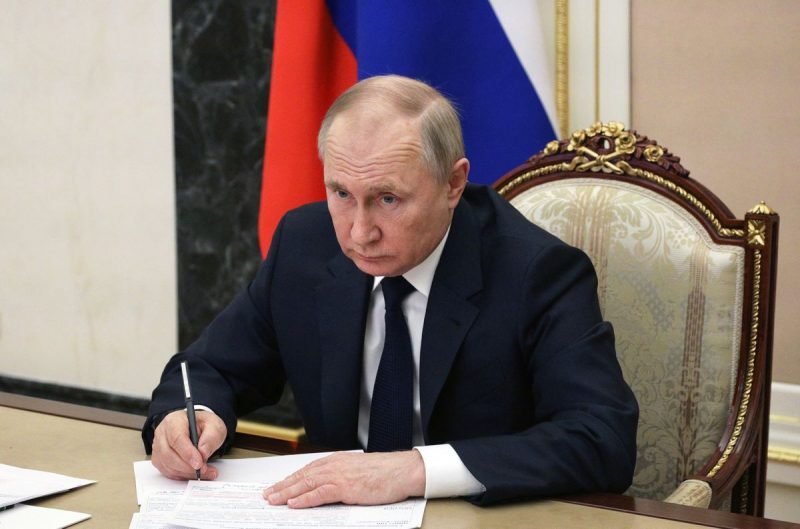 President Vladimir Putin said on Wednesday that Russia would achieve its goals in Ukraine and would not submit to what he called a Western attempt to achieve global dominance and dismember Russia.

Putin said Russia was ready to discuss neutral status for Ukraine, three weeks into a war that has killed thousands of people and forced millions of Ukrainians to flee their homes.

He said that what Russia calls its special military operation was “going to plan”.

In a televised speech to government ministers, Putin went further than before in acknowledging the pain that Western sanctions were inflicting on the economy, but insisted that Russia could withstand the blow.

There was no sign of any softening in his bitter invective against the West and Ukraine.

“In the foreseeable future, it was possible that the pro-Nazi regime in Kyiv could have got its hands on weapons of mass destruction, and its target, of course, would have been Russia,” Putin said.

Putin has consistently described the democratically elected leaders of Ukraine as neo-Nazis bent on committing genocide against Russian-speakers in the east of the country – a line that the West denounces as baseless war propaganda.

He said Western countries wanted to turn Russia into a “weak dependent country; violate its territorial integrity; to dismember Russia in a way that suits them”.

If the West thought that Russia would break down or back down, “they don’t know our history or our people”, Putin said on the 21st day of the war.

“Behind the hypocritical talk and today’s actions of the so-called collective West are hostile geopolitical goals. They just don’t want a strong and sovereign Russia.”

He said Russia was ready to discuss Ukraine’s neutral status in talks:

“The question of principle for our country and its future – the neutral status of Ukraine, its demilitarisation, and its denazification – we were ready and we are ready to discuss as part of negotiations.”

Ukraine says it is willing to negotiate to end the war but will not surrender or accept Russian ultimatums.

In his most explicit acknowledgment of the pain inflicted by Western sanctions, Putin said inflation and unemployment would rise, and structural changes to the economy would be needed. But he promised support to families with children.

He said the West had in effect declared Russia in default as part of its sanctions over the conflict in Ukraine, but that the conflict had been only a pretext for the West to impose those sanctions.

“The West doesn’t even bother to hide that their aim is to damage the entire Russian economy, every Russian,” Putin said.