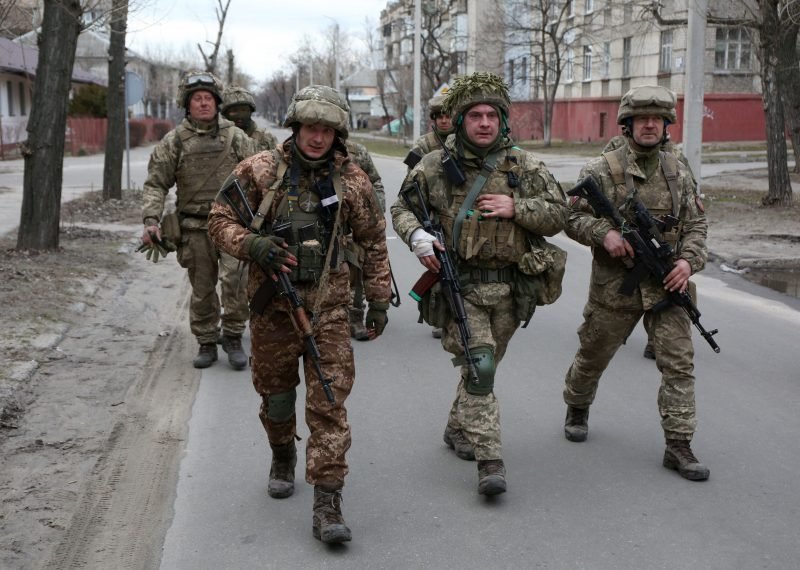 Servicemen of Ukrainian Military Forces walk in the small town of Severodonetsk, Donetsk Region on February 27, 2022. - Ukraine said that it had agreed to send a delegation to meet Russian representatives at the border with Belarus, which has allowed Russian troops passage to attack Ukraine, insisting there were no pre-conditions to the talks. (Photo by Anatolii STEPANOV / AFP) (Photo by ANATOLII STEPANOV/AFP via Getty Images)
PDF Button

The ongoing crisis in Ukraine has finally unfolded with some grave consequences for humanity. After repeated rounds of failed appeals to restrain the behaviour of Russia, the crisis brings into focus the futility and fundamental flaws of the western approach in general and the USA’S policy in particular vis a vis Russia in a fundamentally altered post-cold war and post-pandemic world order.

The genesis of the conflict

The current crisis in Ukraine brings into focus the salience of geography in the geopolitics of the nation. It is pertinent here to mention the Mackinder heartland theory to be able to fully acknowledge the salience of the region that has become the theatre of the current conflict. Way back in 1904, Halford John Mackinder in his book titled “The Geographical Pivot of History” submitted to royal geographical society propounded the heartland theory wherein he argued that whoever controlled the area of eastern Europe, then a part of the Russian empire, will essentially control the world. The area in focus now happens to be a part of what was once the Russian empire and later the USSR.

It is from here that the genesis of the conflict can be traced. The disintegration of the soviet union in 1991 and the concerted attempts by the West in general and the USA in particular to integrate an economically diminished and militarily tamed Russia into western liberal order through what came to be known as the “Shock Therapy” radically altered the equation of power and global order. The world, it was believed, had become unipolar and  Fukuyama had very triumphantly claimed the end of the history and democracy and capitalism as the only credible game in the town. It was argued that liberalism had won the historic battle of ideas once and for all.

This sense of complacency that has crept by then was finally challenged with the rise of China on the global stage. In a yet important development was Vladimir Putin’s ascendancy to power in 1999 and his idea to make Russia great again and claim for itself a global great power status.

Putin, in a subtle manner, did accept the defeat of the USSR and, decide to rebuild his country economically and more so militarily in a sincere effort to secure Russia’s place among the comity of nations. Putin’s grievances from the very beginning and, which also have a key role to play in the ongoing crisis, were very much related to disregard for what is called the idea of indivisible security.  A cold war construct, the idea was first mooted at the Helsinki accord of 1975, broadly outlining the contours of engagement between the warsaw pact members led by the soviet bloc and NATO members led by the western bloc. The idea, since then, has been reiterated at the 1990 Charter of Paris For A New Europe, 1997 NATO-Russia Founding Act, OSCE 1999 Istanbul summit and 2010 Astana summit. The idea, in its simplest connotation, meant that the security of one country should not be enhanced in such a manner to jeopardise the security of others, thereby outlining the inseparability of the country and those in its neighbourhood as one. Howeve, simple the idea may sound, it is precisely the open endedness of the idea that leaves it susceptible to differing interpretations.

The expansion of nato which remains at the heart of the matter has been interpreted as a violation of this very idea by Putin. Russia under Putin from the very beginning has harboured revanchist tendencies which got even more bolstered by what he saw as an apparent violation of all terms of agreement, reassurances and guarantees given to by the west. The sense of injustice was quite pervasive, so much so, that it led to the 2008 annexation of Georgia, the 2014 annexation of Crimea and now the invasion of Ukraine, which Russia calls demilitarization and denuclearization of Ukraine, carried out through a special military operation.

The tragic tale in Ukraine once again highlights the inherent weaknesses of the American and its EU allies’ strategy. The USA, rather than consigning to dustbins its signature policy of “beggar thy enemy”, that it followed visa a vis USSR, has mindlessly pursued with the same policy and that too at its peril. USA’s active involvement in the remnant areas of the erstwhile USSR not only reveals the misplaced priorities of US foreign policy in the post-cold war era but also runs the dangers of overlooking and not properly focusing on a more serious existential threat ie. China. The active involvement of the USA in an area that doesn’t even count as its vital strategic national security interest shows the intellectual laziness to transcend beyond the textbook liberal ideas about international politics. Russia, which recognises the region as it’s vital and core national security and strategic interest, seems to have acted in a much more realist fashion. The USA and its western allies seem to be quite obsessed with the idea that by imposing sanctions, they could regulate Russian behaviour. However, such kinds of things have failed in the past and are bound to fail even in the present situation to deter Russia from what it intends to do. The history which serves as a better guise helps us to acknowledge the fact that when it comes to the vital and core national interest, Russia is ready to bear any amount of economic pain. The very idea that the west could have extracted something out of Putin by forcing him to brinkmanship was fundamentally faulty as Putin loves brinkmanship and more so, in this case, nuclear brinkmanship. It’s a pity that the west didn’t learn from its mistakes of the past and as they say was doomed to repeat it.

Factoring in the real bully

Therefore, it is expected that the USA and its western allies and partners would pay heed to words of wisdom from none other than BISMARK: “ The secret of politics? Make a good treaty with Russia”.The need of the hour, therefore, is to recognise the real threat and try to work towards its containment. Had the west acted sagaciously, the current crisis would not have broken out. The west and particularly the USA must come to a unified conclusion that China remains a much bigger threat. The Mahanian wisdom of the country ruling the sea ruling the world must be taken more seriously and a serious effort must be made to act in a more unisonous maner. Any further alienation of Russia would only push Russia into the arms of china which could upset the entire balance in a way unheard of. Taking a cue from the Kautilyan wisdom Ukraine should be neutralized as a sort of an ideal buffer between the two powers. The USA must actively and single-handedly focus on pivoting to Asia, which it could only do once it disentangles itself from a zone such as eastern Europe, where it is no longer required. In a nutshell, a modus vivendi with Russia with some give or take serves a larger goal of uniting against the bully ie. china. All of this is impossible without the due recognition of the balance of power politics that works best in such a multipolar system as is evident from past examples.