Maritime a precise answer for India’s border problems with China 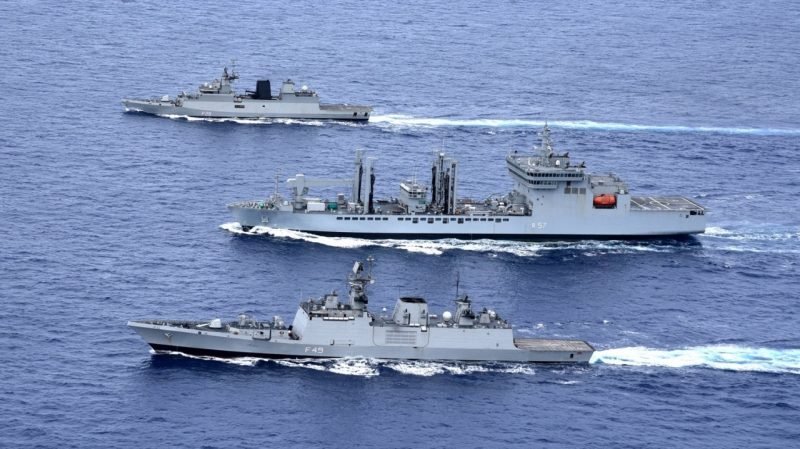 At one point in time, the Chinese Navy started as a coastal defence force protecting its shores. It has since then rapidly become a massive group of integrated fleets capable of expanding further like the Indian Ocean Region (IOR). Such activity in the IOR is going on for many years now. But China insists that it is not interested in using all this naval power to dominate the region. According to a Chinese government report released in July 2019, the navy is only there to defend itself, interests and will never try to seek “hegemony, expansion or spheres of influence.”

The problem for India is that it has repeatedly observed Chinese belligerence on its more than 4000 Kilometer land border called the Line of Actual Control (LAC). The most recent escalation was since 5 May 2020 when China amassed a large number of its PLA troops on the LAC in violation of all peace and tranquillity agreements that were agreed to by the two countries. So why should India trust China when it comes to its claims that will never try to seek “hegemony, expansion or spheres of influence.”

The Indo-Pacific region is becoming increasingly volatile, as China, US, India and others jockey for control. To stay on top China has dredged islands in the South China Sea (SCS) for new military bases. The USA has failed in imposing international costs on China for establishing increasing control over the SCS.

Chinese would definitely like to make IOR their naval stronghold as they have done in the SCS. It is because global trade passes through Indian Ocean, it means economic prosperity of China will be attained at the optimum level. It will make China the sole superpower by replacing Americans from the top in the global order. True that China would like to compete with the United States in the Pacific Ocean but then intentions can change anytime!

The 2020 Pentagon report states clearly that China has the largest navy in the world. The Chinese Belligerence will only increase in the IOR because for a long time China has been funding huge amounts of money into their Navy and continues to do so, in order to make the Navy even more powerful.

One of the reasons why the Chinese would like to dominate the IOR is the Malacca Strait. However, this also keeps their economic prosperity at gunpoint as at any time the US and Indian navies can block it. To minimize this fear, the Chinese are working to create a naval base at Gwadar, Pakistan. That is why China would like to keep India engaged along the LAC and check whether it would be successful in impeding maritime capabilities of the Indian Navy. This is because China’s economic welfare is sea-dependent.

If the Chinese bring in their naval assets from Pacific Ocean to the IOR in order to win a war over Indian Navy, then they might succeed due to their quantity. Speaking at the Raisina Dialogue, the then Indian Navy Chief Admiral Karambir Singh highlighted the immense interoperability between the navies of the Quad grouping. So the Navy Chief said “So if an opportunity arises, we have the capability and capacity to come together in almost a plug and play mechanism,”.

India must impose costs on the Chinese in the IOR. Because if one will not deter them like this then it is quite possible that one day the Chinese would launch a full-scale naval war over India and Japan. If the QUAD will launch a war over the Chinese in the SCS, then China might not dare to challenge India on the LAC, due it being deterrence. During the passage of the National Defence Authorisation Act for 2020, there was a sense by the few of the committees in the US Congress that the USA would face huge threats from China. This would have a longer-term impact. However, crucial question remains as to what are the various forms of threats and how the US might perform? Or how the US Government organizes itself against such a formidable geopolitical force called China? It appears there is a lack of strategy and forethought in the approach that has been too ad hoc until now.

A free and open Indo-Pacific means a quest for it is not laudable. This is because without containing China, one cannot ensure respect for the territorial integrity of countries, free trade, and adherence to International Law. Secretary of State Antony Blinken said that we do not aim to contain China. It seems Blinken himself does not understand much of the Chinese State, because at the same time he said that we want to uphold the International Law (rules-based order) by defending what is required as China poses a challenge. The fact remains that the statement of Blinken has been a contrary statement.

For the USA to protect the rules-based order would mean things that accrue welfare of the Americans; access to markets, strong alliances and security partnerships that have served the US interests till now. On the other hand, there exists China which has a system that is opaque, illiberal and extremely authoritarian which will definitely undermine interests of both India and the US, more in the future as it grows more and more powerful by 2028. So there could be a future wherein the PLA is able to permanently dominate the South China Sea (western pacific), the countries in the region are coerced and acquiescing to Chinese dictates on matters such as maritime commerce and sovereignty issues of the littoral states in the region etc. This includes an economic order where China is setting up trade and investment rules in its favour, as well as the diminishing of civil society, independent media etc.

It would be better if the United States stops bringing issues like the Russia-Ukraine crisis into the QUAD, as was recently observed. Rather than doing theatrics the Americans should introspect and look back to look ahead because their global reputation is in shambles. That is after the Afghanistan debacle immediately comes the Ukraine debacle (militarily being very scared to push back Putin)! So America will have to rethink its global relevance, that if it cannot fight how long will it still be able to remain the sole superpower because China and Russia together are moving since 2017 to fill the vacuum left behind by the Americans. As I have said QUAD must focus on Taiwan in order to save the world from Chinese aggression which has the potential to result in World War III! If Taiwan falls then all talk of QUAD including maritime security would become completely useless.