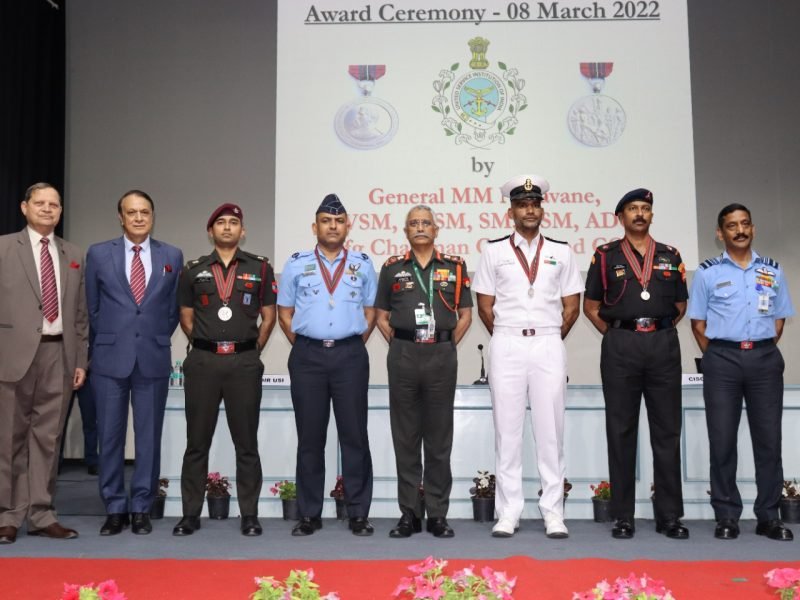 With an introduction to the USI MacGregor Memorial Medal, Maj. Gen. B K Sharma, Director, USI kickstarted the Award Ceremony 2022. He briefly introduced the era of Great Game and the importance of intelligence mission in statecraft. An award that was constituted for exploration in Armed Forces is relevant and honourably recognised till the day.

MacGregor Memorial Medal was instituted on 03 July 1888 to commemorate the memory of Maj Gen Sir Charles Metcalfe MacGregor, KCB, CSI, CIE, the founder of USI. Initially, this medal was awarded for military exploration such as British Army expeditions in Central Asia, Afghanistan, Tibet and Burma. After independence, it was decided to award this medal for adventure activities as well. The medal is open to all ranks, serving and retired, of the Indian Armed Forces, Territorial Army and Assam Rifles.

The Award Ceremony was organised by USI of India on 8 March 2022 and presided by General MM Naravane, officiating Chairman Chiefs of Staff Committee (COSC) & Chief of Army Staff (COAS) in presence of Vice Chiefs from all three services of the Indian Armed Forces, Chief of Integrated Defence Staff (CISC) and President of USI Council.

Speaking on the occasion, Gen Naravane complimented the USI for their great contribution to India’s strategic culture and professional grooming of future military leaders. He also appreciated the role of USI in carrying the legacy of military explorations and extreme adventure sports. He congratulated the awardees for their exceptional talent, grit and determination. He said that the Indian Armed Forces are endowed with exceptional talent and the feats of the awardees will inspire and motivate others to emulate their example to bring laurels and glory to the organisation and India.

The recipients for the USI MacGregor Memorial Medal 2022 are:

2. L Hav (Opr) (now N/Sub) Sanjeev Kumar of Army Adventure Nodal Centre (Hang Gliding), School of Arty, Devlali. N/Sub Sanjeev Kumar created a new world record in powered harness hang glider on 12 Dec 2018 by staying aloft for 8 hrs & 43 mins, from Suratgarh to Barmer, Rajsthan, over a distance of 465.33 kms. This achievement of him has been recognized by Limca Book of Records, India Book of Records and Asia Book of Records; breaking the previous record of 313.13 kms.

For this demonstrated outstanding achievement in adventure sports No 14442238l Hav (Opr) (now N/Sub) Sanjeev Kumar is awarded USI MacGregor Memorial Medal for the year 2020.

3. Anshu Kumar Tiwari of Directorate of Adventure, Indian Airforce. MWO Anshu Kumar Tiwari was tasked to check the feasibility of parachute landing at Khardungla pass (17982 feet), to demonstrate the airborne capability of the Indian Armed Forces as a part of force projection. In that he undertook the jump successfully from 24000 ft AMSL on 8th Oct 2020, thereby establishing the operational validity of this critical parachute system first time ever in international history.

For successful completion of this outstanding achievement in military exploration, MWO Anshu Kumar Tiwari is awarded USI MacGregor Memorial Medal for the year 2021.

4. Maj Ajay Kumar Singh, SM of 11 PARA SF. Maj Ajay Kumar Singh planned, trained and successfully led 1660 km long ARMEX 21 (ski expedition) from the Karakoram to Utrakhand  Pass, across 26 rugged passes above 18000 feet in “the great Himalayas” during winters for 119 days. Experience gained augmented the Indian army’s capability in conducting effective operations in winter across “the great Himalayas”. During this expedition, he successfully opened new routes for conducting effective operations in winters and provided valuable inputs for HAA studies. Besides this, he had earlier successfully rescued a Polish mountaineer from Mount Shivling in inclement weather.

Maj. Gen. Pradeep Goswami, Deputy Director at USI concluded the award ceremony with remarks that USI always encourages the expertise of individuals from all three services and looking forward to recognising the future military explorations.