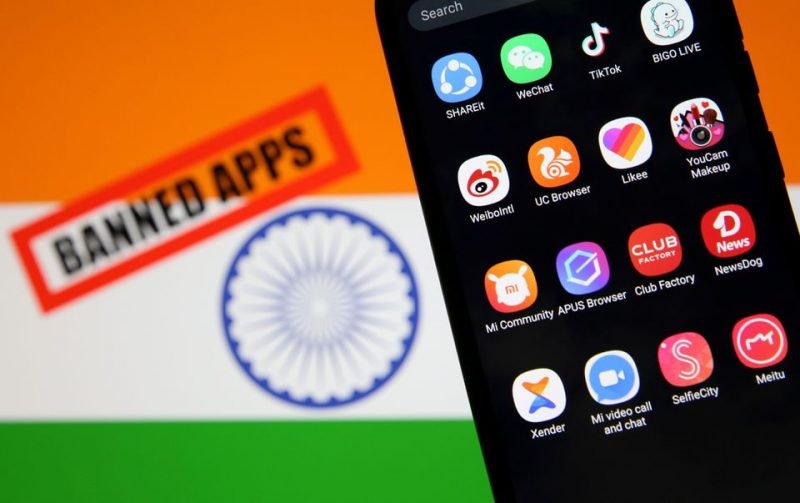 Smartphone with Chinese applications is seen in front of a displayed Indian flag and a "Banned app" sign in this illustration picture taken July 2, 2020. REUTERS/Dado Ruvic/Illustration
PDF Button

Since the start of political tension with China in 2020 following a border clash, India’s ban list, which initially had 59 Chinese apps, including TikTok, has expanded to cover 321 apps.

India believes user data was being sent via the apps to servers in China, one of the government sources, who sought anonymity in line with policy, told Reuters.

Such collection would allow the data to be mined, collated, analysed and profiled, potentially by “elements hostile to the sovereignty and integrity of India and for activities detrimental to national security,” the source said.

Sea, a consumer internet firm in which Chinese gaming giant Tencent holds an 18.7% stake, said on Tuesday it complies with Indian laws and does not transfer or store any data of the country’s users in China.

Tencent did not immediately respond to a request for comment.

Sea had on Monday told its shareholders that it was “working through it” (the ban), according to a person who attended its annual general meeting and declined to be named.

Shareholder concerns followed an 18.4% slide in its U.S.-listed shares on Monday following reports that its popular mobile game “Free Fire” is part of India’s list of banned apps.

The rout wiped off more than $16 billion from its market value, while investment firms like Cathie Wood’s ARK Invest took advantage of the slump to scoop up $19 million worth of shares.

The ban spells trouble for Sea as its e-commerce app Shopee already faces boycott calls by traders in India, who have accused it of practices that hurt offline traders.

The “Free Fire” ban could have a revenue impact of between $78 million and $104 million per quarter, he said, adding that it was difficult to rule out the possibility of a similar ban on Shopee.

The Confederation of All India Traders had said on Monday it was “surprised” at Shopee’s absence from the ban list.

On Tuesday, shares of Sea were up about 4% in premarket trading and if gains hold through the session, they could recoup some losses.