US and NATO coordinate position ahead of Russia talks 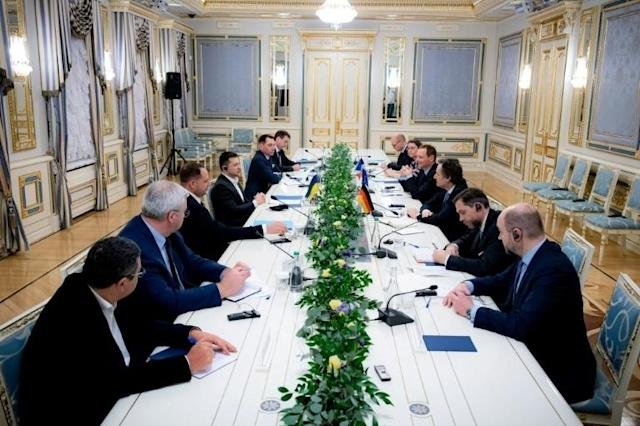 The United States and its European allies coordinated their stance Tuesday ahead of new NATO-Russia talks to defuse the Ukrainian border crisis, as Kyiv demanded an international summit.

Envoys from Washington and Moscow held inconclusive talks on Monday in Geneva on how to avert confrontation after Moscow deployed forces near Ukraine and demanded wide-ranging security concessions.

On Wednesday, NATO will renew suspended contacts with Moscow at a round of talks between senior diplomats from Russia and allied member states at their Brussels headquarters.

The United States hopes the diplomacy will head off what it sees as Russia’s implied threat to launch a new military incursion into Ukraine — without giving much ground on Russia’s demands.

“It’s too early to tell whether the Russians are serious about the path to diplomacy or not, or if they’re prepared to negotiate seriously –- we are,” White House spokeswoman Jen Psaki said.

US President Joe Biden’s spokeswoman insisted: “NATO’S relationship with Ukraine is a matter only for Ukraine and the 30 NATO allies, not for other countries to determine.”

But Washington’s European allies are keen not to be sidelined, as President Vladimir Putin’s Kremlin seeks to roll back what it sees as the West’s post Cold War encroachment on its turf.

Ukraine’s President Volodymyr Zelensky on Tuesday reiterated his demand that France and Germany join a new international summit between Moscow and Kyiv to end the conflict.

The French presidency said the Kremlin had agreed for France, Germany, Russia and Ukraine to hold talks “by the end of January”.

But the Ukrainian president’s spokesman Sergiy Nykyforov also welcomed “the intent and efforts of the United States and Russia, and NATO and Russia to reduce tensions and resolve all mutual issues at the negotiating table.”

“We trust our partners and their statements that no decision on the fate of Ukraine will be taken behind our back,” he said, in a video statement sent to AFP.

Ukraine’s Foreign Minister Dmytro Kuleba said “unity” was key against what he described as “Russian ultimatums”.

US negotiator Deputy Secretary of State Wendy Sherman was at NATO headquarters to brief European allies.

She brought NATO Secretary General Jens Stoltenberg up to date on her Geneva talks with Russia’s Deputy Foreign Minister Sergei Ryabkov, and then met NATO ambassadors.

“The United States is committed to working in lockstep with our allies and partners to urge de-escalation and respond to the security crisis caused by Russia,” she tweeted.

With Stoltenberg, Sherman “affirmed a unified NATO approach toward Russia, balancing deterrence and dialogue”, and stressed “our unwavering support for Ukraine”.

After more than seven hours of negotiations in Geneva on Monday, the Russian and US officials both offered to keep talking, though there was no breakthrough.

At NATO, Russia will be represented by Deputy Foreign Minister Alexander Grushko, who described the meeting as “a moment of truth” in Russia-NATO relations.

Moscow’s demands include a concrete guarantee that Ukraine will not be allowed to join NATO.

The allies have long insisted that NATO membership is a matter for sovereign states to decide for themselves and vowed to preserve their open-door policy.

And they have threatened massive economic and financial sanctions against Moscow if its huge troop build-up on Ukraine’s frontiers and in already Russian-occupied Crimea turns into a new invasion.

But, speaking after Monday’s talks and ahead of his return to Brussels, Grushko insisted: “Our expectations are entirely realistic and we hope that this will be a serious, deep conversation.”

He said Russia would demand a comprehensive response from the alliance to its demands.

“We will push for a concrete, substantive, article-by-article reaction to the Russian draft agreement on guarantees,” he added.

Sherman said Russia offered no proof it would not invade or any explanation for why it has deployed some 100,000 troops towards the Ukrainian border.

She had offered de-escalation moves, with Washington and Moscow to agree on reciprocal limits to missile batteries and exercises.

The new US ambassador to NATO, Julianne Smith, told reporters the talks could include a “discussion of reciprocal restrictions on exercises”.

She described the broad themes of Wednesday’s talks as “risk reduction, transparency, arms control and various ways in which we communicate with each other — that is NATO and Russia.”

Russia has put intense pressure on Ukraine since 2014 after a revolution overthrew a government that had sided with the Kremlin against moving closer to Europe.

Russia has seized and annexed the Ukrainian region of Crimea and Moscow backs an insurgency in eastern Ukraine in which more than 13,000 people have died.