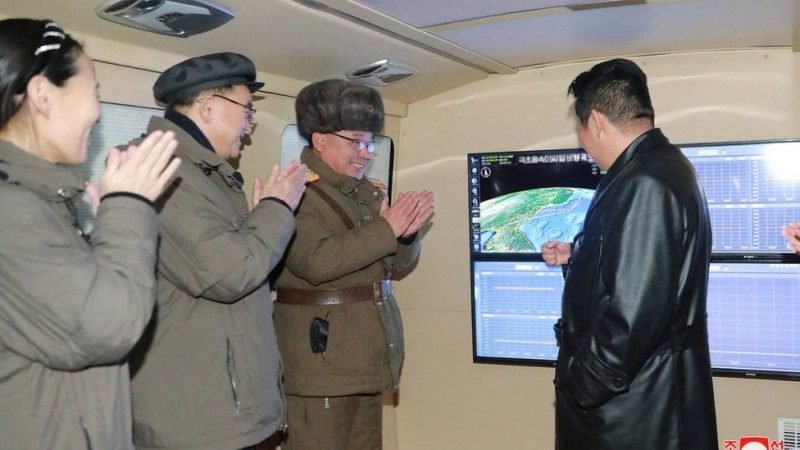 North Korea’s leader Kim Jong Un personally oversaw the successful test of a hypersonic missile, state media reported Wednesday, the second such launch by the nuclear-armed nation in less than a week.

Photographs posted on the website of Rodong Sinmun, the official newspaper of the ruling Workers’ Party, showed Kim Jong Un wearing a long black leather coat and using binoculars to watch the test from his mobile viewing platform.

“The superior manoeuverability of the hypersonic glide vehicle was more strikingly verified through the final test-fire,” the KCNA report said.

Other images in Rodong Sinmun showed the missile blasting off from land at dawn in a blaze of fire and smoke, and Kim discussing charts with uniformed officials.

This is the third reported North Korean test of a hypersonic gliding missile.

The first, which took place four months ago, was followed by one last week, as the country looks to add the sophisticated weapon to its arsenal.

Hypersonic missiles travel at speeds of Mach 5 and higher and can manoeuvre mid-flight, making them harder to track and intercept.

The KCNA report said the hypersonic glide vehicle performed “corkscrew manoeuvering” during a portion of the journey.

Russia is generally seen as the world leader in the technology.

In the decade since Kim took power, North Korea has seen rapid advances in its military technology at the cost of international sanctions.

Hypersonic missiles were listed among the “top priority” tasks for strategic weapons in its current five-year plan, and it announced its first test — of the Hwasong-8 — in September last year.

“While it might be defensible to describe this weapon as hypersonic, it’s more accurately described as a manoeuvering reentry vehicle,” said Ankit Panda of the Carnegie Endowment for International Peace.

Leif-Eric Easley, a professor at Ewha University in Seoul, said the “so-called hypersonic weapon is not technologically ready for deployment.”

“Nonetheless, Pyongyang’s ability to threaten its neighbours continues to grow,” he added.

The fact that Kim Jong Un attended the missile test personally indicates that North Korea is satisfied with the level of progress, said Lim Eul-chul, a professor of North Korean studies at Kyungnam University in Seoul.

North Korea has also refused to respond to US appeals for talks.

At a key meeting of North Korea’s ruling party last month, Kim vowed to continue building up the country’s defence capabilities, without mentioning the United States.

Dialogue between Washington and Pyongyang remains stalled, and the country is under multiple sets of international sanctions over its nuclear and ballistic missile programmes.

The impoverished nation has also been under a rigid self-imposed coronavirus blockade that has hammered its economy.