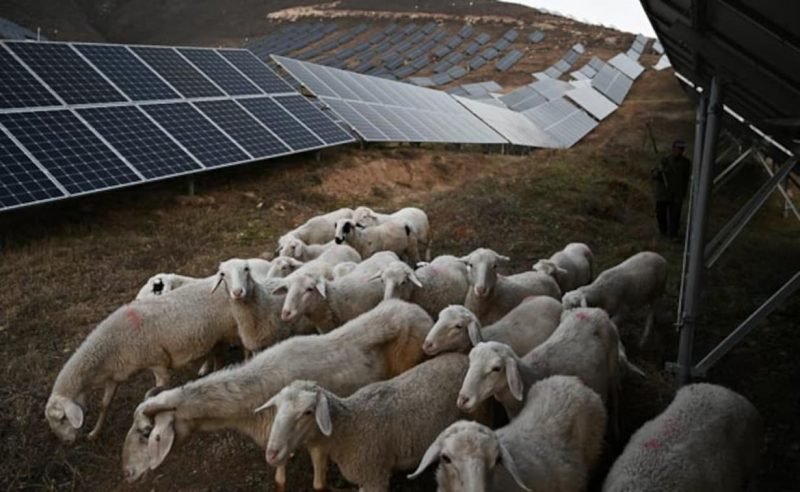 Beaten, forced off their land, cheated out of money, and even falsely imprisoned — farmers in China say they are paying a heavy price as authorities rush to deliver on ambitious pledges to ramp up national green energy output.

China has vowed the upcoming Winter Olympics 2022 will be the first Games to be run entirely on wind and solar energy, and have built scores of facilities to increase capacity — but activists warn ordinary people are being exploited by “land grabs” in the process.

In a hamlet near Beijing, the Long family — who say they’ve lost more than half their agricultural land to a sprawling solar farm next door — now have so little income they are burning corn husks and plastic bags to stay warm in winter.

“We were promised just 1,000 yuan per mu of land each year when the power company leased the land for 25 years,” farmer Long from Huangjiao village said, using a Chinese unit of land equal to approximately 667 square metres.

“We can make more than double the amount by growing corn in the same area. Now without land, I eke out a living as a day labourer.”

China is the world’s biggest producer of wind turbines and solar panels, and the Winter Olympics is seen as an opportunity to showcase the country’s green technologies as they seek global markets.

To ensure an uninterrupted power supply for the Games — and clear the winter smog choking the Chinese capital — Hebei province neighbouring Beijing has built a giant plant that takes in power from renewable projects in the province.

That one plant creates 14 billion kilowatt hours of clean electricity every year, similar to the annual energy consumption of Slovenia.

But for farmers like Long and his neighbour Pi, the green energy boom has made their lives more dangerous and difficult.

Pi says villagers were forced to sign contracts — seen by AFP — leasing their land to the solar park built by State Power Investment Group (SPIC), one of the five biggest utility companies in the country.

Those who didn’t agree were beaten by the police, he said, adding “some were hospitalised, some were detained.”

Pi was jailed for 40 days, while Long languished in prison for nine months for “illegally gathering and disturbing peace,” after a public protest.

“The situation is similar to a mafia,” Pi said. “If you complain, then you’ll be suppressed, imprisoned and sentenced.”

The average annual disposable rural income in Baoding is about 16,800 yuan ($2,600), a figure both Long and Pi said they can no longer make.

AFP could not confirm that electricity from the SPIC project near Huangjiao would be used to power the Olympic venues directly, because that information is not publicly available.

The company declined to confirm when asked by AFP.

But the Zhangjiakou government — the city co-hosting the Games — has said that since winning the Olympic bid in 2015, the area has “transformed itself from scratch (into) the largest non-hydro renewable energy base in China.”

Government subsidies for wind and solar farms have also accelerated construction of such projects in other parts of Hebei, as China scrambles to cut air pollution before the Games.

In a statement, Amnesty International said “forced evictions, illegal land seizures, and loss of livelihoods related to the loss of land” were among the most frequent human rights concerns associated with the wind and solar energy sectors.

China wants 25 percent of its electricity to come from non-fossil fuels by 2030.

To achieve this, the country has to more than double its current wind and solar capacity — but environmentalists warn land seizures will become more widespread as energy companies rush to produce renewables.

And although Beijing has set a series of ambitious targets around the Winter Olympics, green campaigners face heavy pressure in China if they challenge the official line.

Several told AFP they were not comfortable discussing Beijing’s environmental targets for the Games for fear of reprisals.

In September, China announced strict rules for compensation when land is taken over for ecological projects, including the development of green energy.

If farmland is being used for renewable energy projects there should be a benefit sharing programme in place such as powering greenhouses, she said.

But several farmers AFP spoke to said companies were labelling agricultural fields as wasteland to skirt the rules.

Xu Wan, a farmer in Zhangjiakou, lost his land to a solar installation built during the run-up to the Games.

“The company told us this was non-usable land, but actually it’s all very good agricultural land used by us farmers,” Xu said.

Zhangjiakou Yiyuan New Energy Development, which installed the solar project in Xu’s village, did not respond to AFP’s request for comment.

“Where the land comes from has become the biggest issue restricting the development of the industry,” he said.

‘The corruption is intolerable’

Renewable investments also made up over half the new projects under China’s global infrastructure push — the Belt and Road initiative — last year.

Priyanka Mogul from The Business and Human Rights Resource Centre, a UK-based non-profit that has studied the impact of Chinese renewable investments abroad, said some developers had also been accused of controversial practices when acquiring land overseas.

“The most prevalent issue was inadequate disclosure of environmental impact assessment (data)… followed by issues related to land rights and loss of livelihoods,” she said.

To reduce conflicts when taking over village land, China has billed most solar farms as poverty alleviation projects, where villagers get free electricity from solar panels installed on their roofs.

According to 2014 state guidelines, utility companies should then buy back the extra electricity in a programme to lift two million families out of poverty by 2020.

But in Huangjiao with over 300 households, only two roofs had solar panels, and villagers said there had been no programme to install solar panels.

“At a central level, the government has good policies for farmers,” Pi from Huangjiao village said.

“But once it comes to the village level, things change. The corruption at the grassroots level is intolerable.”