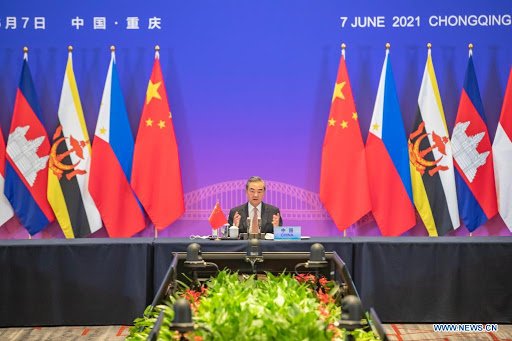 China recently hosted a meeting with 10 ASEAN countries foreign ministers, much ahead of the anticipated G7 meeting in Cornwall, this week. Chinese Foreign Minister Wang Yi organized a virtual meet with his counterparts in Chongqing to discuss various issues ranging from ‘vaccine passport’ to economic ventures in the new COVID world. However, the ASEAN meet hosted by China has many layers within it given that as a regional organization it has a lot of credibility and functionality with regards to the operation in the region. It will not be a mistake to say that the West and China have been very keen to take up their respective interests when it comes down to the Indo-Pacific region. With China hosting the ASEAN meet just days ahead of the G7 meet could be interpreted that not anytime soon the tensions surrounding the Indo-Pacific region will disappear.

But to just analyse the meeting as a counter to the G7 meet will be understating the potential of ASEAN itself. China taking the lead must realize the grave problems which are internalized within the members. Myanmar has been seized by the military junta since February 2021, and a very little or negligible amount of efforts have been underway to restore the democratic process there. Foreign Ministers of Singapore and Indonesia had expressed their concern over Myanmar through the 10 member meeting. Singapore’s Foreign Minister Vivian Balakrishnan expressed that the restoration of democracy in Myanmar can only be possible if there is some genuine dialogue regarding the same. He also showed his discontent with the very little progress ASEAN members have been able to make so far. The world is indeed awaiting the progress from this regional group as pointed correctly by Malaysian Foreign Minister Hishammuddin Hussein. Chinese Foreign Minister Wang Yi mentioned, “China will continue to maintain close communication with ASEAN, support ASEAN’s mediation efforts, and work with all parties in Myanmar in its way to promote an early soft landing of the situation in Myanmar.” The trial of captivated leader Aung Sang Suu Kyi is still awaited.

Lately, complaints against increased Chinese military activities have been reported from around the South China Sea. The Philippines have sought after China and called out such incidences. The matter of the South China Sea has been getting uglier day by day, with China and the West accusing each other of trespassing. China’s construction of new facilities had caused a great amount of debate with the West and the regional players like the Philippines and Cambodia. The QUAD’s intervention is another significant layer to the problem at the South China Sea. The informal military association between Australia, India, Japan and the US has so far not been perceived well by the Chinese authority. Time and again, China has incessantly warned India about joining such cooperation and sees the initiative as a major disruption for Chinese diplomacy in the region. Although the matter was not precisely taken up at the meet, as a regional cooperative it is imperative that this agenda be not left behind.

Although there are not any detailed reports on the minutes of the meeting, Global Times, the state-run Chinese media has reported certain social development projects comprising of Laos, Vietnam, Thailand, Myanmar and Cambodia. The meeting concluded with vaccine diplomacy between the ASEAN countries intending to reach a consensus for distribution and procurement.