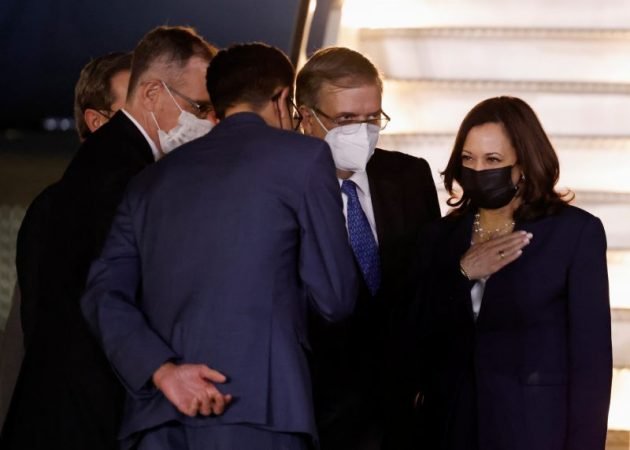 U.S. Vice President Kamala Harris told Mexican President Andres Manuel Lopez Obrador that she saw him as a partner in tackling migration as they agreed on Tuesday to deepen economic ties and invest to improve conditions in Central America.

The administration of President Joe Biden has been struggling with the number of migrant children and families arriving at the U.S.-Mexico border, mainly from Central America, and Biden has tasked Harris with trying to solve the issue.

On her first trip abroad since taking office, Harris said talks with Lopez Obrador were “candid,” covering topics, including security, vaccines, the pandemic and the spread of the drug fentanyl. She also said she would visit the U.S.-Mexico border.

“We made clear that the United States considers Mexico to be a partner on many of these issues,” Harris told reporters after the meetings, hailing a “new era” of bilateral relations. Lopez Obrador called the encounter “pleasant and beneficial.”

Harris and Lopez Obrador spent more than an hour in private meetings, as well as in broader talks, a White House aide said.

Much of the focus was on improving livelihoods, and the United States pledged an additional $130 million over three years to support Mexican worker rights along with a goal of creating $250 million in investment and sales in southern Mexico, it said in a vaguely worded statement.

The two sides will hold a meeting known as a high-level economic dialogue in September to look at ways to promote investment and make the most of a new trade deal, statements from both governments said.

A similar meeting will also be held on security, and a task force will work on breaking up people smuggling rings.

Since Biden took office in January, the number of migrants taken into custody per month at the border has risen to the highest levels in 20 years.

Lopez Obrador, who built a working relationship with Donald Trump despite the former U.S. president’s economic threats and insults against Mexico over migration, said his government was very interested in maintaining good relations with Washington.

Harris did not say if she used the meeting to push Mexico to further intensify efforts to detain migrants, many of whom travel through Mexico to the U.S. border in order to escape poverty, crime and corruption in Central America.

“In terms of border security, the work that we are doing together includes the work of processing migration within the country of Mexico and its southern border,” Harris said after the meeting.

Mexico detained 91,000 illegal migrants in the five months of the year, immigration authorities said on Monday, with minors making up a fifth of all detentions. Some members of the Biden administration want Mexico to do more.

The vice president, who has faced repeated questions from Republican critics about why she has not visited the border, said she “would go.”

The administration sees Mexico as an important partner both on slowing the flow of migrants and on working on development in Central America, where relations between national governments and Washington are increasingly fraught.

Washington and Mexico largely agree they need to attack underlying causes of poverty and violence to stem migration from Central America’s “Northern Triangle” – El Salvador Guatemala and Honduras. Before the meeting, Harris and Lopez Obrador witnessed the official signing of a memorandum of understanding to “co-create and co-manage” a program to deliver and measure aid to the region. The aim was to address the lack of economic opportunities in northern Central America, with a focus on farm development and youth programs, a U.S. statement said.

Harris has previously promised an additional $310 million in aid to soothe the impact of the pandemic and hurricanes last year in Central America.

Mexico has implemented cash-for-tree-planting and youth unemployment benefit programs to El Salvador and Honduras on a limited scale and plans to add Guatemala, Foreign Minister Marcelo Ebrard said on Tuesday before the Harris meeting. It was not clear if the U.S. would participate in these cash transfer projects.