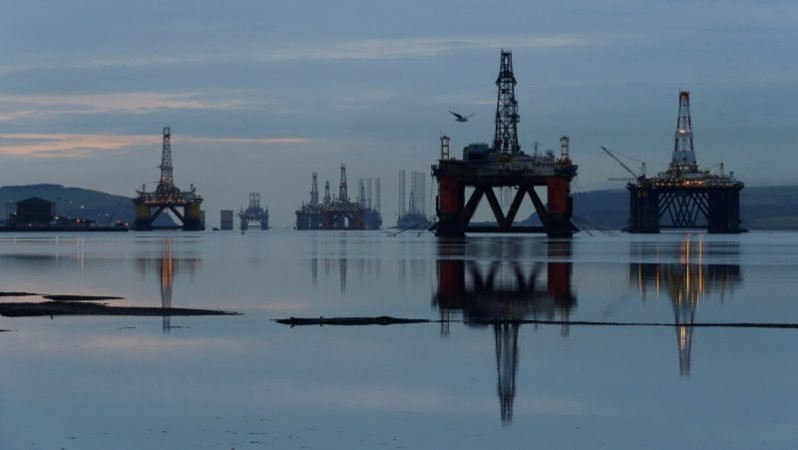 Britain faces a fossil fuel dilemma: it can burnish its green credentials by halting new oil and gas development in the North Sea, yet doing so will leave it more reliant on imported fuel.

How Britain charts a course to achieve net zero emissions by 2050 will be under scrutiny when it hosts the COP26 climate conference in Glasgow, Scotland, starting on Oct. 31.

In June 2019, when Britain enshrined its 2050 net zero target in law, Greenpeace activists steered speedboats towards a BP platform in the North Sea brandishing a “Climate Emergency” banner to try to stop production starting from Vorlich oilfield.Report ad

Neither legislation nor activism halted the development. Production from Vorlich started in November 2020.

Oil majors say new production can play a role in managing decline, while campaigners are pressing for an immediate halt to new projects with publicity stunts and legal action.

The government, meanwhile, needs to keep the nation’s lights on as it smoothes over volatile energy markets and juggles competing demands over how to achieve its climate goals.

“If supply goes away and demand doesn’t change, that only has one consequence and that is an escalation in price rises,” BP Chief Executive Bernard Looney said this month.

Britain and other European states have already felt this acutely. Brent crude , a benchmark based on North Sea barrels, is up more than 60% this year, while the price of UK benchmark wholesale gas has risen more than 250%.

The challenge caused by shrinking domestic production and rising fuel imports has been felt across Europe. The European wholesale gas price is up more than 350% this year.

Britain, which could once depend on its own fields for oil and gas to fire up its power stations, fuel its cars and heat its homes, has been a net energy importer since 2005 as output from the North Sea has dwindled.

With the capacity of its gas storage facilities now only enough to last the nation a few days, Britain’s reliance on just-in-time supplies shipped in from Qatar or elsewhere leave it exposed when the market tightens, like now with the surge in demand as economies recover from the COVID-19 pandemic.

For activists, the answer is not turning the taps back on but rather reducing domestic fossil fuel consumption.

“We’re calling on Boris Johnson to stop pushing through new oil and gas projects,” said Greenpeace activist Philip Evans, addressing the British prime minister who has been pressing other countries to deepen climate commitments before COP26.

“If the government is worried about keeping the lights on there are things they can be doing to reduce demand,” Evans said, including improvements to home insulation, cleaner public transport and more investment in renewable power generation.

Around 70 scientists and academics sent an open letter published in Britain’s Independent newspaper this week calling on Johnson to stop allowing investment and licensing for new oil and gas fields, saying that “now is the time for bold political action”.

Britain has made progress in some areas. It is the world’s biggest offshore wind power producer – and is expanding this resource rapidly. But that doesn’t power homes on windless days.

Yet, there is rising pressure to act faster to curb fossil fuel use. The International Energy Agency said in a report the world must halt new oil and gas projects to achieve the 2015 Paris climate summit targets that aim to limit global warming to 1.5 degrees Celsius by 2050 compared with pre-industrial levels.

“The purity of the (IEA) report is excellent, but the reality in practice for countries is about ensuring security of supply,” Anne-Marie Trevelyan told Reuters in June when she was still British minister of state for energy and clean growth.

Britain has not committed to ending North Sea exploration, taking a similar approach to Norway but not Denmark, another North Sea producer, which has halted new projects.

Britain has, however, been managing a decline, with production now half its 1999 peak at about 1 million barrels of oil equivalent per day (boepd), or about 1% of global oil demand.

Oil and Gas UK (OGUK), an industry association, has committed to making the North Sea an operationally net zero basin by 2050, which means it aims to eliminate, capture or offset any residual emissions from producing oil and gas there.

It said in September that domestic production was cheaper and cleaner than imported gas, given shipping fuel creates emissions and because some other producing nations have poor environmental records.

Yet, Greenpeace and other activists say these arguments miss the point: using fossil fuels must stop rather than simply trying to make using them cleaner.

To push for swifter action, they have taken campaigning to the courts.

In one case, Greenpeace sought to have a BP gas field licence scrapped over its emissions via a Scottish court – although the action failed.

In another case, it is seeking to halt development of the Cambo field off the Shetland Isles, a field part owned by Royal Dutch Shell

“We’ve delivered a 12-foot oil-stained statue of Boris Johnson right to the gates of Downing Street calling him out as a monumental climate failure,” said Greenpeace’s Evans. “They can expect to see a lot more of Greenpeace in the court room.”