Will China and the Czech Republic’s war of words escalate? 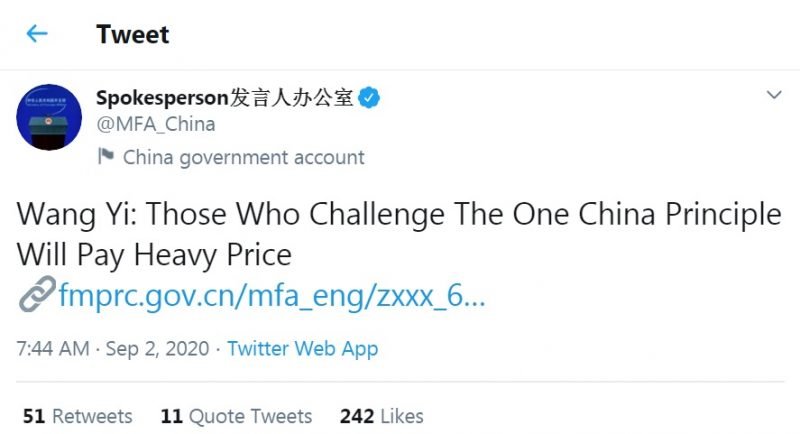 When the senate president of the Czech Republic, Milos Vystrcil, visited Taiwan on an official visit this week and addressed the Taiwanese Parliament, China’s Foreign Minister, Wang Yi, described it as “An act of international treachery”. While giving a speech to the Taiwanese lawmakers, he proclaimed, “I am Taiwanese,” referencing to the Former US President John F Kennedy’s speech during his visit to West Berlin during the Cold War and also added that Kennedy “used the phrase ‘Ich bin ein Berliner’ to show his support for the people of Berlin and the highest values of freedom.”. Needless to say, this invited a lot of backlash from Beijing, not only Europe touring Foreign Minister Wang Yi who said, “The Chinese government and Chinese people won’t take a laissez-faire attitude or sit idly by, and will make him (Vystrcil) pay a heavy price for his short-sighted behaviour and political opportunism.”

Beijing has already warned the Senate President Vystrcil and his 90 member delegation political and civil leaders who visited Taiwan for working towards a trade agreement. According to the article published in the Asia Times by David Hutt, if China does not follow through with the threats, then it will be a sign for other European nations to establish strong bilateral ties with Taiwan and make official visits to the country. On the other hand, if China does follow through with the threats, it will further strain the already poor relation with the Czech Republic, thereby establishing China as an aggressor towards an innocent European nation. By looking at the damage control tour Foreign Minister Wang Yi is on, getting on Europe’s bad side is the least of what China wants right now.

More threatening to China here is the fact that the visit of the Czech Senate President Vystrcil comes just a week after US Health Service Secretary Alex Azar visited Taipei, becoming the first high ranking US official to do so and it also comes just a fortnight after Mike Pompeo’s visit to the Czech Republic. The main reason for concern though is, the visit comes after there have been apparent tensions between Beijing and Prague for the past one year. The Chinese embassy in Prague has earlier threatened former late President Jaroslav Kubera against visiting Taiwan when he was planning it. These threats may refer to mean trade reprisals against Czech companies, especially Skoda. The mayor of Prague, Zdenek Hrib also cancelled the capital’s sister-city agreement with Beijing and said that he would replace it with Taipei. He has also been very verbal against the human rights abuses in China. Therefore, the hostility against China in the Czech Republic has been to a large extent more domestic. Even the public opinion is not favourable to China as only 27% look at the country favourably, the lowest in Europe after Sweden.

The war of words which began right after Wang Yi publically condemned Senate President Vystrcil’s visit, was taken to the next level by Mayor of Prague district Reporyje, Pavel Novotny, who addressed a letter to him on his Facebook page, the clear motive of which was to demand an apology from Wang Yi for the comments he made against his country and said that they will pay “a heavy price” for what the minister said in his speech in Berlin as “crossing a red line”. He also called the Chinese Foreign Ministry to be behaving as “rude unmannered clowns”. The letter was worded very strongly against the Foreign Minister, with claims that the Czech Foreign Minister agrees to him but dare not express this sentiment publicly due to a pact between the “not very sane” Czech President Milos Zeman and his “co-conspirator” Prime Minister Andrej Babis and communist China.

Due to high profile visits in Taipei recently on the rise, Beijing’s safely guarded One-China Policy is now seemingly under attack, as different countries not only openly acknowledge the Taipei’s democratic government but also are vying for better trade relations with the country. This might make China’s retaliation to the Czech Republic a bit more likely, but also mild as China needs Europe as an ally in these trying times with the USA, with allegations on human rights abuses and with China’s overall unpopularity in the continent due to the “Mask Diplomacy” issue. China has to be hence, warier of its actions.