Non-Tariff Barriers, COVID Relief and Rebalance of Geopolitics at the India-EU Trilateral Dialogue 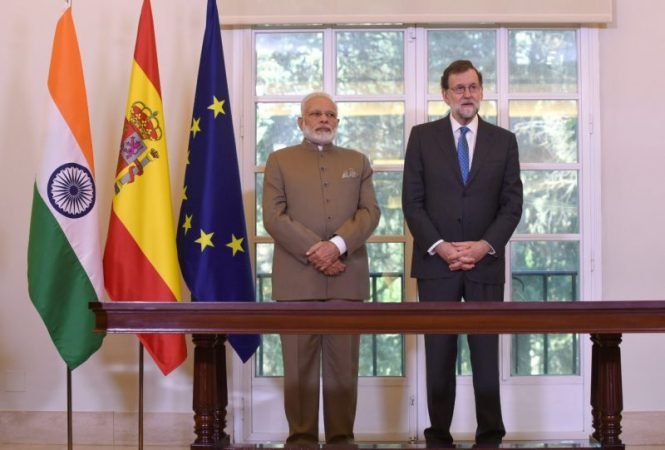 The Prime Minister, Shri Narendra Modi and the President of Spain, Mr. Mariano Rajoy at the signing ceremony of agreements/MoUs between India and Spain, at La Moncloa Palace, in Madrid, Spain on May 31, 2017.
PDF Button

In an attempt to strengthen ties between the European Union and the Republic of India, Spanish think tank Elcano Royal Institute organised a trilateral talk between Portugal, Spain and India on enhancing multilateral cooperation and alleviating challenges. India has come a long way since establishing diplomatic relations with the EU after the 2004 strategic partnership, paving way for long-standing economic alliances. Although, much is left to be explored and there holds enormous potential between two parties to tap into each other’s markets.

Open Trade with the EU

Quick to address one such challenge was the Indian Additional Secretary at the Ministry of External Affairs, Dammu Ravi, emphasizing on the EU not being as open a market as it claims to be with Indian companies facing issues due to the non-tariff barriers set by the Commission. Indian ambassadors have pointed out these unachievable standards in the past as well, which stops many indian companies from expanding their business in Europe. Elimination of these barriers can help improve the ambition level that lacks in policies with the EU. “Any trade deal needs to be a win-win for both sides. It has to create that kind of a situation or else it would make no sense,” he remarked. He also asserted on the importance of establishing multilateral trade rules so no country is used for ‘dumping products’ and developing strong intellectual property rights.

Supporting his statements were Eurico Brilhante, Secretary of State for Government of Portugal and Carmen Cano, Deputy Director General for South and East Asia for Government of Spain. Both further defended the need for connectivity partnership and strengthening EU presence in the region. Spain and Portugal share similar democractic values and the pandemic has added the urgency of tapping into unfulfilled potential, especially in the spheres of healthcare and pharma.

Both countries have promised to stand in solidarity with India during the collapse of health infrastructure due to the disastrous second covid wave. The EU also plans on sending immediate relief through shipment of oxygen concentrators and medical supplies. The Indian Additional Secretary also remarked saying, “If any other offers are coming from the member countries, we’ll study it … and respond. We are indeed grateful for the support by member countries.”

Many EU states like Germany and Russia have extended their support with the Union activating its Civil Protection Mechanism for providing emergency assistance. France has in fact promised to send eight oxygen generators, five containers of liquid oxygen and 28 ventilators in the project called ‘Solidarity Mission’ that is going to help combat this battle in the long run.

Another focus of the conference was on how these relationships can sustain in the long run and overcome drawbacks in trade agreements. One important factor discussed by Ruben Campos, a Senior Research Fellow, Elcano Royal Institute is the need for dialogues reaching the higher levels of decision makers and the public. Another Fellow at the Foreign Policy and Security, Centre for Social and Economic Progress, Constantino Xavier criticized the general approach of diplomats in reducing interactions to mere temporary transactional relations. Whereas the need of the hour is laying a strong foundation for a longer, sustainable world order where both the EU and India can become strong players, especially with new emerging powers like China. Asserting – “Principles matter along with power” he discussed three crucial areas where both parties can work, purely on the basis of shared values- Data Governance, Multilateralism and Capacity Building.

The Indian Ambassador to Spain, Sanjay Verma also stressed in his introductory remarks saying, “ These challenges (disruptions due to pandemic) have resulted in an external shadow which casts itself on the prospects of the EU-India geopolitical cooperation. Can we do more to inform the elected members of the EU parliament about the larger and long term implications of stronger EU- India relations? Do we need to nudge popular media in both our geographies to the positives to the global order of an aligned EU in India?”

This conference comes at a time where both parties are set to discuss strategies at the Lisbon Summit on May 8. With both India and EU letting go off their hesitation in participating in geopolitics and taking a more proactive stance, the world’s eyes are on them to resume stalled trade negotiations and build stronger economic links in this Summit.