Non-Refoulement of Rohingyas in India 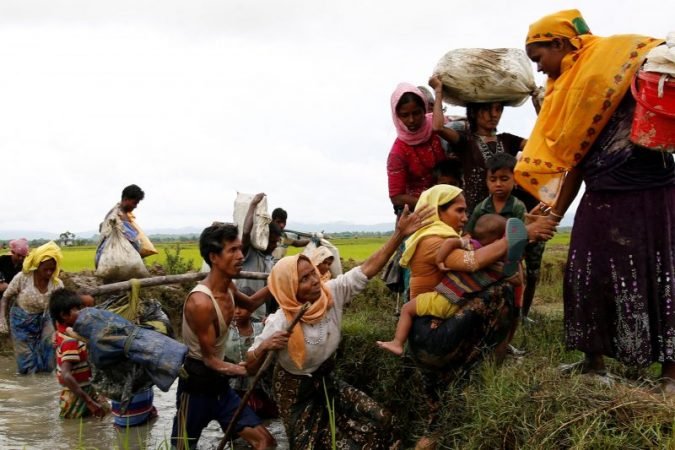 India’s Act East Policy (AEP) is considered to be the keystone of its foreign policy with its South Asian neighbours. The Look East / Act East Policy attempted to cultivate and strengthen all interactions such as political, cultural, socio-economic, geo-strategic, security, trade, investment, etc with countries East of India. Myanmar has always occupied an integral position in the AEP. Not only because it shares land and maritime borders with the Northeastern states of India but it is also a gateway to Southeast Asian countries. India and Myanmar have in the past cooperated to keep out militants and maintain peace and security in the Northeastern states. Myanmar acts as a strategic buffer state with respect to China and also provides an attractive market. Therefore, India has huge stakes in the development and security of Myanmar.

The Spring revolution in Myanmar has currently become a global flashpoint since the Tatmadaw coup on 1st February 2021. Since then the violence has been escalating against peaceful protestors including brutal killings of children. The Myanmar army also conducted late night air strikes in villages. The United Nations Security Council attempted to issue a statement condemning the crackdown by the military in Myanmar, however it was blocked by China. The G7 countries condemned the military’s violent response to those opposing the coup and have urged the military to ‘exercise utmost restraint and respect human rights and international law’.

It is interesting to note that while the developed democratic powers were vocally opposing the anti-humanitarian actions of the Tatmadaw, India along with China, Russia, Pakistan, Bangladesh, Vietnam, Laos and Thailand attended the military parade commemorating the Tatmadaw day. India’s attendance of the parade while being the world’s largest democracy tacitly speaks to its approval and perceived legitimacy of the coup. While India has not condemned the violence, it released a perfunctory statement that it would wait and watch the developments. Mizoram Chief Minister Zoramthanga wrote to PM Modi seeking for India’s intervention in what he called ‘a human catastrophe of gigantic proportions’ and that India cannot ignore this humanitarian crisis.

The growing violence in Myanmar is not just a security issue for India, but exports to Myanmar may take a hit if this continues. As a result of the turbulent conditions in Myanmar, there has been an influx of refugees in India. Despite the social and communal tensions, India’s response to the influx of 10 million refugees from Bangladesh in 1971 was considered to be exemplary. However, during the Modi regime, India doesn’t seem to be following its open arms tradition with the refugees.

Why is India silent on an issue so close to home?  Is India no longer looking/ acting East? Is India on the right side of this issue?

The closed doors attitude of the government has been affirmed by the Indian judiciary as well. The Indian police have detained around 170 refugees in Jammu in a sub-jail and they are set to be deported back to Myanmar. However according to the reports in The Hindu, The Print, The Indian Express and The Tribune show there may be up to 6500 refugees illegally detained in Jammu. After hearing an interlocutory application seeking the release of the detainees and directing the government not to deport the refugees, the Supreme Court passed an order allowing the deportation of Rohingya refugees back to Myanmar where they faced and will continue to face genocidal humanitarian abuses. The SC’s decision rests on its interpretation of Article 19(1)(e). The Bench held that ‘the right not to be deported is ancillary or concomitant to the right to reside or settle in any part of the territory of India guaranteed under Article 19(1)(e)’. The Court added that the deportation of Rohingyas in Jammu shall be done in accordance with the procedure prescribed for deportation.

It is my opinion that this case should not be decided only on the basis of Article 19(1)(e). Solicitor General Tushar Mehta appearing on behalf of Union of India disputed that the Rohingya detainees were ‘refugees’ and called them ‘illegal migrants’ instead. The issue of nomenclature and legal status arise due to the lack of legislation regulating the refugees. Even now, refugees are considered as ‘foreigners’ as per the Foreigner’s Act, 1946. When there is no law defining and determining the status of refugees in India, it is customary to draw inspiration from the decisions of the International Court of Justice, International Conventions and Treaties as acknowledged by the Supreme Court.

Non-refoulement is an international legal principle that prohibits the transfer of refugees back to their country of origin where they are in danger of being subject to torture, arbitrary deprivation of life, human rights violations and persecution on the grounds of race, religion, nationality, association with a social or political group. It is not disputed that India is not a signatory to the Refugee Convention which guarantees non-refoulement under Article 33. However, there are many other international legal instruments that deal with the rights and remedies available to refugees. India is a party to some of them, viz. International Convention on Civil and Political Rights, Convention on the Rights of the Child and The Convention against Torture (signed but not ratified).

The issue of deportation of Rohingyas cannot be determined only on the basis of Constitutional interpretation. It is true that under international law, States can reserve the right to regulate the stay of foreigners in their territory. However, this right is not absolute and has to be exercised in consonance with other international laws. Moreover, refugees cannot be considered as mere ‘foreigners’ since the Foreigner’s Act defines a foreigner as a person who is not a citizen of India. Unlike a ‘foreigner’, a ‘refugee’ has the right to certain minimum procedural guarantees under international law. It is important to distinguish between voluntary migrants and forced migrants. It is also pertinent to note that the principle of non-refoulement applies to refugees or asylum-seekers regardless of whether their formal status is recognized. Under International Human Rights law, there can be no derogations or exceptions to the principle of non-refoulement.

Under IHRL, every State has a legal obligation to uphold the principle of non-refoulement. States should set up a fair and effective procedure to determine the status and protection needs of the refugees. Once a State has exercised its jurisdiction on the refugees, it has a duty to assess on a case to case basis whether there is a risk of fundamental rights violation if sent back to the country of origin. India has not only failed to protect the minimum guarantees set forth by international law, but it has failed the asylum seekers who fled their country fearing torture, genocide and other humanitarian abuses.

India may still not be a party to the Refugee Convention, but the refugee influx problem is overwhelming India. It is high time the Parliament legislates a law regulating the refugees in India and provide them due protection as under international law. The Supreme Court has also said that it cannot comment upon the present state of affairs in Myanmar. But how can the Court not consider the humanitarian crisis in Myanmar especially when it is deciding whether to deport the refugees back to Myanmar? In the meantime, the fate of refugees in India is bleak as they are simply deported back to their country where torture, rape and murder await them. If India wants to indeed Look/Act East, it needs to take a stand in the Myanmar humanitarian crisis.

Madhuvanthi Rajkumar is currently working as a Research Associate at the Indian Institute of Public Policy. He's also a lawyer registered at the Bar Council of Tamil Nadu and Puducherry and have completed LL.M in Public International Law at Leiden University, Netherlands.