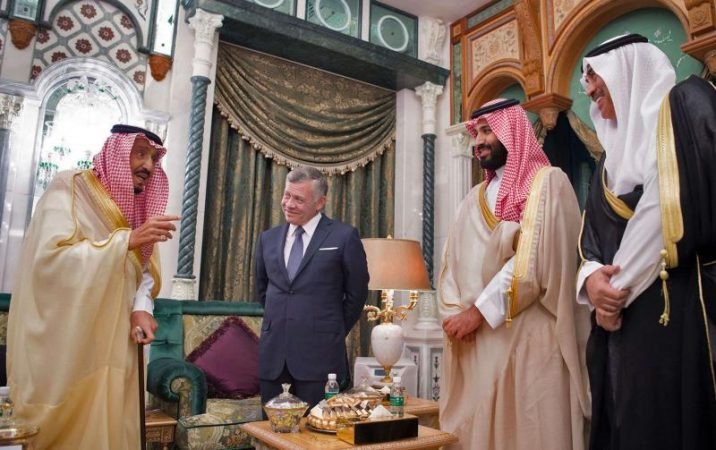 Saudi Arabia fervently denies involvement in Jordan’s royal feud, but the arrest of an advisor to Crown Prince Mohammed bin Salman has stirred unease in Riyadh, which sources say is pushing for his release.

Bassem Awadallah, seen as an influential figure familiar with the inner workings of the Saudi leadership, was ensnared in a rift within Jordan’s royal family that played out in full public glare.

Riyadh officially threw its support behind Jordan’s King Abdullah II, who has sought to draw a line under the damaging row with his half-brother Prince Hamzah as state television showed them together on Sunday for the first time since the crisis erupted.

Saudi officials dismiss speculation it was behind the split, insisting that such royal infighting could have dangerous ripple effects for other monarchies in the tinderbox region.

The speculation arose as Jordan suggested a “foreign” hand was behind the crisis, with observers immediately pointing the finger of suspicion at Riyadh.

But a source close to the leadership of Saudi Arabia, no stranger to royal ructions, told AFP that Riyadh has “zero interest in destabilising Jordan”, a longstanding regional ally.

The trip came, the source said, as Saudi rulers felt “the (Jordanian) king was being fed rumours by other parties that they needed to refute in person and not over the phone”.

But further intensifying speculation about Saudi motives, two sources privy to the discussions said the delegation in Amman pushed for Awadallah’s release.

He has also been photographed praying beside the prince, known by his initials MBS, an honour usually reserved for his closest confidantes.

Awadallah, a contentious figure in Jordan who has served as head of its royal court and also special envoy to Saudi Arabia, is among at least 16 people arrested in connection with what Amman has described as a plot to destabilise the country.

“Not only did the (Saudi) foreign minister go to get Bassem, the Saudi intelligence director and MBS’s chief of staff went to Amman,” Bruce Riedel, a former long-time American CIA officer now with the Brookings Institution, told AFP.

The Saudi source denied the delegation was there for Awadallah, without saying which officials were part of the team.

“Awadallah has a personal relationship with the crown prince,” a Gulf-based Western official told AFP.

“Having him in jail is hurting the Saudi image both in Jordan and abroad as suspicions about Saudi involvement are not totally erased.”

Bessma Momani, a professor at Canada’s University of Waterloo, said Awadallah was important to the Saudis as he has “working knowledge of many Saudi economic plans, policies and strategies that they would like to ensure are not shared” outside the kingdom.

Jordanian officials have not specified the charges against Awadallah.

But his arrest appears to be a red herring in the entire feud which broke out earlier this month, the Western official said.

What Jordanian authorities initially called a foreign plot has turned out to be a bitter squabble between the king and his half-brother, whom he had stripped of the title of crown prince in favour of his son.

“Awadallah’s arrest diverts attention from the rivalry inside the Jordanian royal family and hints at a possible foreign involvement,” the Western official said.

The troubles in Jordan echo similar power plays in Saudi Arabia, where King Salman sidelined a senior royal in 2017 to name his young son, Prince Mohammed, as heir to the Arab world’s most powerful throne.

Since then, Saudi Arabia has ignored an outcry from human rights campaigners as it detained multiple royal family members in a sweeping crackdown, including the ousted former crown prince, Mohammed bin Nayef.

“It remains to be seen whether King Abdullah has the will and or the power/authority to shut his brother down, but a failure to do so will weaken the monarchy, maybe fatally,” Ali Shihabi, a Saudi government advisor, wrote on Twitter.

“This explains why King Salman (a strong and experienced leader) has been so firm with his family during the succession to Crown Prince MBS.

“Failure to have done that could have exposed Saudi to multiple ‘Hamzah episodes’.”