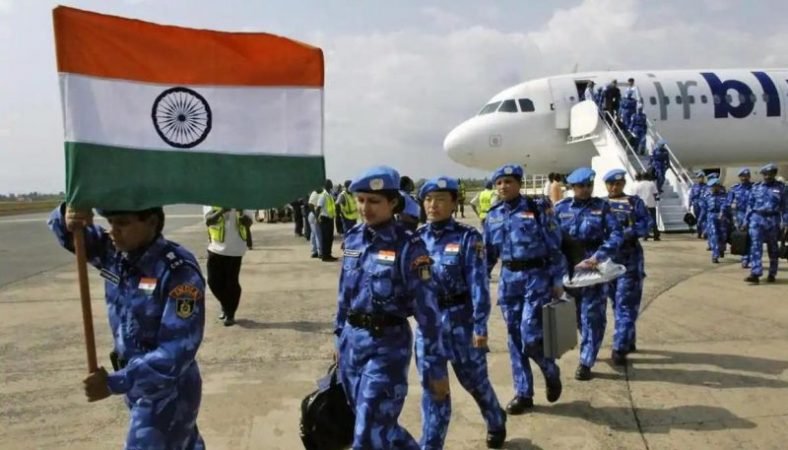 On 26th January 2021, India pledged to contribute USD 150,000 for UN’s Peacekeeping Funds this year. Ambassador TS Tirumurti, Permanent Representative of India to United Nation pledged the funds as a token of India’s support and active engagement in UN’s peacekeeping missions, further urging the member-states to prioritize specific aspects of peacebuilding with optimum utilization of funds while handling post-conflict situations. Ambassador Tirumurti stated, “2021 will provide us with an opportunity to look at peacebuilding with a broader context and in a more focused manner”, as he quoted the current situation of global COVID pandemic a “threat” to UN’s previous accomplishments. He emphasized that India passionately believes that building the governance structure and upholding the ideals of “democracy and rule of law” stands to be a vital step towards peacebuilding. He further underlined the significant role played by India in UN’s peacekeeping operations (UNPKOs) and its continuous bilateral assistance in post-conflict situations through providing substantial grants and soft loans, especially in Asia and Africa.

During the Cold War era, when the intimidating rivalry between US and USSR paralyzed the functioning of UNSC, it led to the formation of UN Peacekeeping Forces as a crucial tool for the UN to maintain peace and security of the emerging global world. Since then, India is recognized to have a long and distinguished tradition to serve in UN Peacekeeping operations. After India’s independence, one of its earliest deployment took place in UN Military Observer Group in India and Pakistan (UNMOGIP) in 1948. Further, in 1950, India set the record of longest single tenure served by any military unit under UN’s mission by deploying 60 Parachute Field Ambulance of the Indian Army to provide medical assistance to UN Repatriation Commission in Korean War for three and a half year (November 1950-May 1954).

The accomplishments of past UN missions along with the intensification of globalization, the capacity of UN peacekeeping force expanded allowing it to address and monitor issues of stability of governance structures in state and humanitarian concerns of the civilian population. Thus, evolving its role to achieve political and social objectives. India aligned with this evolved role of UN Peacekeepers and in 1960 deployed two India Brigades in ONUC UNKP which rendered service to counter secession and work towards re-integration of the Congo, at its request. Captain Gurbachan Singh Salaria, became the only UN Peacekeeper to be honoured with Param Vir Chakra, for laying his life in defence of UN mandate of Congo.

India has also been recognized and applauded by world leaders for deploying the first ever all-women contingent to UN Mission in Liberia (UNMIL) in the wake of brutal civil war from 2007-2016. The Indian female police-unit was conferred with the responsibility to provide 24-hour guard duty and public order management, thus assisting to build the local security institutions in the capital city, Monrovia. In 2016 when the last women contingent departed from Liberia, President Ellen Johnson Sirleaf stated that the initiative by India imparted the spirit of professionalism, encouraging Liberian women to join entities and mission which render security service to the nation which has certainly contributed to an increased in the number of female officers in the country. Moreover, India was the first country to contribute to the UN Trust Funds (2016) which addressed the issue of sexual exploitation and abuse towards women. This itself symbolizes the decade old commitment of India to recognize and empower the crucial role of women in peacebuilding activities.

In addition to this, Indian Veterinaries deployed in UN Mission in South Sudan (UNMISS) ran a clinic centre that helped the cattle herd community of Sudan (in upper Nile region) to sustain their living in the war-torn nation by treating their sick cattle and educating the community about disease prevention, serves to be another prominent display of India’s commitment towards humanitarian service.

These contributions by Indian units at UNPKOs not only signifies its long devotion towards the pace and security of the International community but also highlights the three broad areas in which India’s contribution stands distinct. First, peacebuilding initiatives carried out by Indian peacekeepers by empowering and monitoring the governance structures, as witnessed in its UNMIL initiative to deploy first all-female police unit in Liberia and its assistance in building the institutions of independent Namibia under UNTAG. Second, protection and assistance of civilian population via ‘on field initiatives’ such as medical assistance, engineering services as mentioned in India’s contribution in ONUS UNKP (Congo) and UNMISS (South Sudan). Lastly, apart from ensuring political transition to peace in various UN missions, Indian military official have also been appointed prominent posts. India’s Lt. General Satish Nambiar served as the first Force Commander in UNPROFOR in former Yugoslavia and Major-General I.J. Rikhye served as the first Military Advisor to UNGA between 1960-67.

Since 1948, India has served in 49 of the 71 peacekeeping missions with sending more than 2,08,000 troops. As of 2018, India has sacrificed 160 peacekeepers – the largest sacrifice by any troop-contributing country. Till date, India stands to be the fourth-largest contributor to UNPK forces, currently, deploying around 6,700 peacekeepers, in which vast majority is posted in Democratic Republic of Congo and Sudan.

It should also be noted that apart from UNPKOs, India has strived towards peacekeeping initiatives via unilateral terms also, Indian military contingent ‘Indian Peace Keeping Force (IPKF)’ carried out peacekeeping operation in Sri Lanka under the mandate of the 1987 Indo-Sri Lankan Accord to end the civil war between LTTE and Sri Lankan military. Whereas, recently (2021) Indian Foreign Secretary, H.V. Shringla while addressing the cooperation meet of Indo-Pacific, asserted India’s apprehension towards China’s increasing military aggression in Indo-Pacific region, claiming it as a crucial maritime domain for global trade, Shringla stated that the region requires security, peace, and stability.  India sought to a net-security provider against the anti-piracy operation in Gulf of Aden.

TS Tirumurti, in his recent pledge for USD 150,000 grants also emphasized India’s firm belief that to achieve peacekeeping one must first focus on peacebuilding and further quoted, “Strengthening security structures go hand in hand with strengthening civilian structures of good governance,” certainly enlightens us towards India’s vision to call world leaders to assist funds utilization in aspects of good governance, social upliftment and medical service to combat Covid causalities. The announcement of grant to UN peacekeeping by India, perfectly aligns with its tradition to render passionate services towards establishing peace and security in the world community. Its vision of strengthening civilian structures and institutionalizing best practices complements India’s recent stance on supporting Palestinian nation-building efforts via India-Palestine development partnership to uplift Palestine economy and a pledge of USD 10 million to United Nations Relief and Works Agency for Palestine Refugees in the Near East (UNRWA) for two years stating it to be an “investment in peace and stability in the region.” Further, it has also recently deployed two teams of specialists and experts to fortify medical facilities in UNPKO’s in Congo and Sudan.

It is imperative to note that this announcement overlaps with India’s re-entry as a non-permanent member to United Nations Security Council (UNSC), where India strives to fight for the reform of extending decision-making power of UNSC to non-permanent member too. Whereas, increasing engagement of India in UNPKO’s also eminently allows it to be a favourable candidate for a permanent member in UNSC.