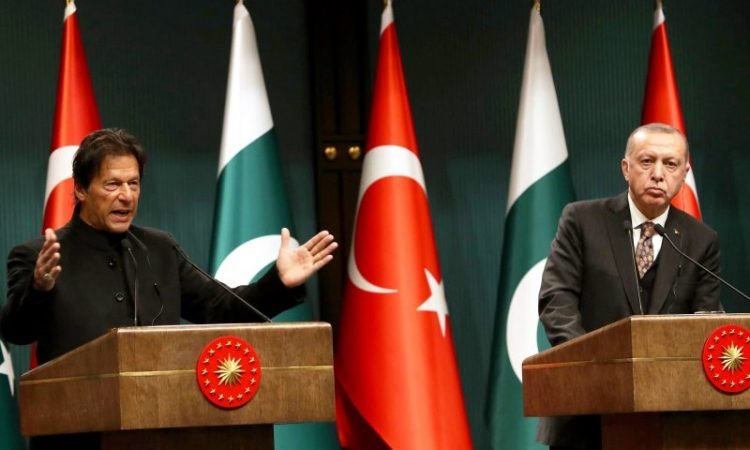 According to analysts, this meeting has come about within a rapidly developing geopolitical order. Pakistan and Turkey have now become staunch strategic allies- close partners secured by common shared interests. Recep Tayyip Erdoğan, the ambitious PM of Turkey, wishes to emerge as the foremost Islamic leader, sidelining Mohammed bin Salman, the crown prince of Saudi Arabia, who is also the trojan horse for the wealthy six-nation Gulf Cooperation Council (GCC).

Earlier, in September 2019, when for the first time Erdoğan, alleged that Turkey was a victim of nuclear discrimination and made his stand clear to hound for nuclear weapons, he stated, “Several countries have missiles with nuclear warheads, not one or two. But [they tell us that] we can’t have them. This I cannot accept.” However, his assertion is flawed and based on self-interest. Several developed countries are not possessing atomic weapons. Only nine countries – the United States, Russia, the United Kingdom, France, China, India, Pakistan, North Korea, and Israel – possess nuclear weapons, with Washington and Moscow owning 93 per cent of them, as published by the prestigious Arms Control Association. Therefore, the evidence of Turkey-Pakistan nuclear collaboration is streaming in as recently. On December 21, 2020. Pakistani Army met with the Turkish Army for the Second Round of talks between Turkish-Pakistani Military delegation. Sources said that transfer of missile technology and Unmanned Aerial Vehicles (UAV) were focused during the discourse of the meeting.

Indian Prime Minister was expected to travel to Turkey last year in 2020 but he called his trip off. India also cancelled a major defence deal with Turkey because of Turkey-backed Pakistan’s position in the Kashmir issue. This is only the latest instance which shows how powerful the relationship between Turkey and Pakistan has become. So why is Turkey looking to Pakistan now? Turkey once hoped to become a part of the European Union but those hopes were dashed so now Turkey’s President Raccep Tayyip Erdoğan has turned his attention to the Islamic World. In that context, Imran Khan’s Pakistan has become one of his key allies. So ‘pan-Islamism’has become the glue for Turkey and Pakistan as Erdogan aspires to be ‘the big brother’ of the Muslim world.

There’s a quid pro quo aspect of this relationship as well. When Pakistan’s fate was hung in the balance in FATF, Turkey was one of the countries that voted to prevent the blacklisting of Pakistan. Erdoğan has also issued statements saying that 8 million people were under siege in Kashmir. Pakistan on the other hand was the first country in the world who supported Turkey when it invaded the ‘Kurdish population‘ in northern Syria.

But this recent bonhomie is not without historical context. Pakistan PM Muhammad Ali Jinnah, the founder of Pakistan and Mustafa Kemal Atatürk, the founder of modern Turkey are seen as reflections of each other. Both seen as modernists by their respective people. Imran Khan is only the latest in the long line of the Pakistani leaders that admire Atatürk. Well, the actual credit for the strengthened relationship in recent times, also goes to Nawaz Sharif who got many projects started with turkey during his time as PM. But Imran Khan has taken this relationship to the next level. Even, recently there was a proposal to start a joint TV channel run jointly by Turkey, Pakistan and Malaysia to counter Islamophobia in western media. As a result of rising bonhomie, therefore it was natural that Turkey, in its pursuit for atomic weapons, narrowed its focal point on Pakistan, which has a well-established record of nuclear smuggling. So, as Turkey become one of Pakistan’s strongest allies second only to Chinese, India will be watching very carefully.