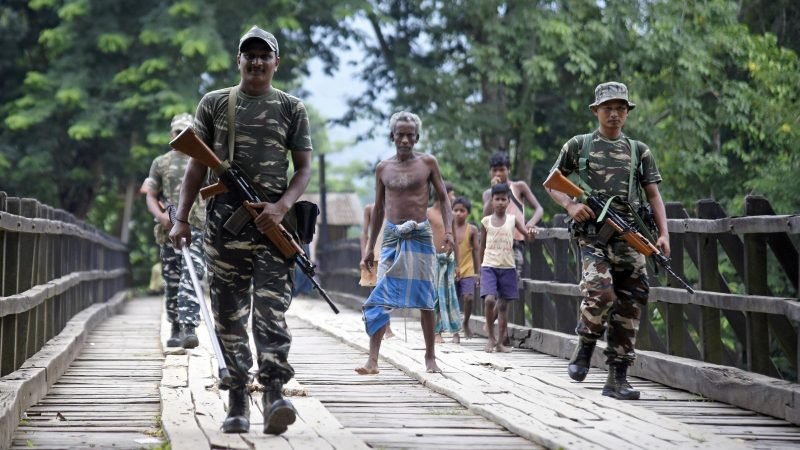 As temperatures continue to drop in eastern Ladakh, military preparedness along the L.A.C (Line of Actual Control) is simultaneously picking up. Currently, both sides are showing no signs of disengagement; Army Chief General Naravane reviewed the state of affairs in the North East on 25 November. The three-day visit saw the briefing of the operational situation and counter-insurgency operations along the L.A.C, particularly in the states of Assam, Manipur, Nagaland and Arunachal Pradesh. The intention behind the visit was not only to assess the possible volatility of security affairs in the region but to track the progress of the Naga Peace Talks. In the background of the Army Chief meeting with the Chief Minister Neiphiu Rio, the insurgent group NSCN (I-M) released a statement expressing criticism over the Ministry of Home Affairs cracking down and intensifying operations against the Naga groups and did not shy away from reminding the Centre of the Framework Agreement signed between the two in 2015.

The NSCN (I-M) is just a fraction of a larger paradigm of China’s role in India’s North East insurgency. Even prior to the India-China skirmishes this year, New Delhi called out Beijing for supporting Paresh Baruah, chief of ULFA-I (United Liberation Front of Asom-Independent). For decades, Baruah has been spearheading Assam’s separation from India and has been operating from the Yunnan province in China. There are several reports in the media claiming that China plays host covertly, to the chief of ULFA-I. Perhaps this is attributed to Beijing’s increasing stake in the Indo-Pacific region and has given impetus to be creative with various options in dealing with India.

This year in particular has seen visible fault lines in the Indo-China relationship. To add to the complexity of the situation, India’s diplomatic efforts in the North East seem to be yielding no results. There have been a series of incidents alone in 2020 that triggered New Delhi’s vigilance in the region. On 29 July, there was a joint attack in the Chandel district of Manipur by the MNPF (Manipur Naga People’s Front), the RPF (the Revolutionary People’s Front) and ULFA-I, which left three Assam Rifles soldiers dead and five others injured. Additionally, there has been a surge of Chinese weapons seized this year which brings to the foreground, the substantial flow of illegal Chinese made arms which has been a perennial challenge with its neighbour.

A staggering amount of 423 illegal weapons including AK-47’s, M-16s, Chinese pistols and Lathodes have been recovered this year alone especially from states with heightened insurgency activity such as Assam, Manipur, Nagaland and Mizoram. India’s North East and China have long shared a history of training insurgent groups, harbouring exiled militants and leaders and providing arms to the groups. Flow of consignments of Chinese made weapons have always been a sustained problem for national security and in some way, the porosity of the India-Myanmar border, has given way to increasing arms trafficking. This year alone, with Myanmar’s support, there have been 2259 surrenders from key groups.

India’s North East and China have long shared a history of training insurgent groups, harbouring exiled militants and leaders and providing arms to the groups. Ever since India gained its independence in 1947, this region has witnessed turmoil, agitation and separatist movements. The Siliguri corridor, also called the ‘chicken’s neck’ links the North East region to mainland India, and also borders Bhutan, Bangladesh, Myanmar and the Tibet Autonomous Region. Separatist movements have birthed insurgent groups where violence is directed at Indian security forces and communities living in “mainland” India. Exclusive laws meant for the region have further constricted democratic space which has lent to the draconian nature of the region. China’s ‘diplo-terrorism’ against India since the 1960’s has been a matter of concern, and capitalized on the separatist feeling that was haunting India. At the time India’s counter-insurgency strategy was primarily aimed at blocking entry-exit routes for the Pakistan and China bound guerilla columns. Even through the late 1980’s factionaries were visiting Kachin for training and procuring weapons, encouraged by China at the time. Currently, India is facing a recurring problem with different facets, and in lieu of Sino-Indian frictions, the increasing disconcertment in the region could perhaps give China elbow room to turn tables in its favour.

Border disputes and growing insurgency: An opportunity for Beijing?

The timing of the sharp downturn of Sino-Indian relations arguably provides Beijing with an opportunity to increase pressure on India through insurgent groups. While China has been invested in the ULFA-I and NSCN (I-M) for years, this moment would be apt for China to augment and manifest its military and financial support to these groups. Moreover, there have visibly already been elements of mistrust between the groups and the Centre. Deadlocked talks between NSCN-IM and New Delhi have given way to a precarious situation at hand and has paved way for a fragile security situation in Manipur, Assam, Nagaland, Mizoram and eastern Arunachal Pradesh. While the intelligence bureau has noted that the porosity of borders allow infiltration of Chinese made arms, in addition to hosting training camps for insurgent outfits; it is still difficult to gauge China’s intent behind supporting these groups. There is no doubt, this fragile security situation offers China an effective tool to exert pressure on India, especially when New Delhi is facing a moment of crises; but despite the groups being linked to China for years, there have been no signs of high-intensity kinetic action against the central government. Coupling China’s link to the North East and the overall Sino-Indian relationship would be one dimensional.

China has been cautious enough not to ruffle too many feathers, but it has also skillfully unveiled that it has the capabilities to alter India’s security architecture in the North East. While China is a factor that impinges upon a conflict-ridden North East; isolation, fragmentation, ethnic security dilemmas, perceived feelings of neglect by New Delhi, and problems associated with being viewed as peripheral to India’s imagination of itself are equally dominant drivers of unrest and regional instability.

Priyanjali Simon is a Freelance Strategic Analyst. She Has an M.A. in Geopolitics and International Relations from Manipal Academy of Higher Education (MAHE).