RCEP Signing: An Event of Refutations and Hopes 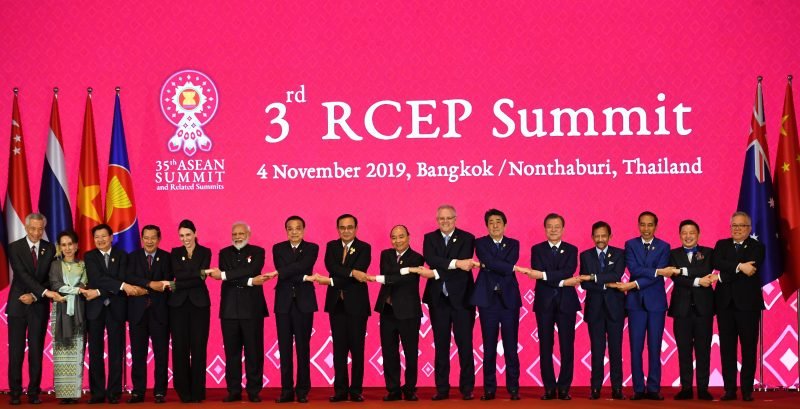 On November 16th, the most significant development, it seems, was about The People’s Republic Of China initiating the RCEP (Regional Comprehensive Economic Partnership) deal to be signed in order to ensure multilateralism, free trade and removal of tariff barriers. The aim of the countries signing was basically to enhance mutual trust, win to win business, and to make access to technology, digital intelligence plus intellectual property, easier in a globally interconnected order amid this period of increased uncertainty.

There was no opposition from other countries, even though they knew about the opportunity costs involved since many countries because of rising Chinese dependency due to interconnectedness and import-export couldn’t back out where members such as the ASEAN, being a balancer in the region doesn’t want to take sides with respect to the West due to geographical, cultural as well as economic proximity to the Chinese.

The RCEP covers 30% of global trade plus also according to Brookings, this agreement could lead to further adding USD $209 billion to global incomes and USD $500 billion towards world trade by 2030. Japan, South Korea are important exporters to China with a total trade of USD $720 billion. These three countries are aiming at a trilateral FTA  to focus on interlinking industrial and supply chains along with a strengthening of global supply chains, where these initiatives show a higher trend in reliance taking place on China.

According to the ASEAN Joint Statement, Singapore, New Zealand, Japan, Australia and Vietnam were insistent upon India reconsidering its decision due to strategic importance while withdrawing but while looking at the trade deficit it has with China at, increased apprehensions in the Himalayas and banning Chinese products, decided to back out looking at future repercussions if moved towards making a commitment which could hamper national as well as security interests.

India is looking towards improving its small scale and medium enterprises, since it has individual FTA’s with ASEAN, Japan and South Korea, countries were insistent on India always on joining the agreement since it could have the potential to act as a counterweight to China. According to the security expert, Shyam Saran, India will not benefit through leaving the RCEP because these FTA’s are useful but not as much as regional engagements which could lead to increased access to advanced markets but since India has a large market, other countries would have been given more preference in case India participated since the former didn’t take enough decisions properly in order to get maximum benefits.

As the External Affairs Minister, S Jaishankar, pointed out in a recent virtual discussion that the opportunity costs of this happening could be that when countries completely become dependent on the core, they start acting as per the core’s interests and lose the capability of manufacturing using own their own skills and technology, leading to dependency. RCEP could be seen as a tool of again, as they say, preference creation where incentives and hopes are given to a country for acting as per another dominant force’s demands.