The Assassination of Mohsen Fakhrizadeh: What Are the Iranian Regime’s Options? 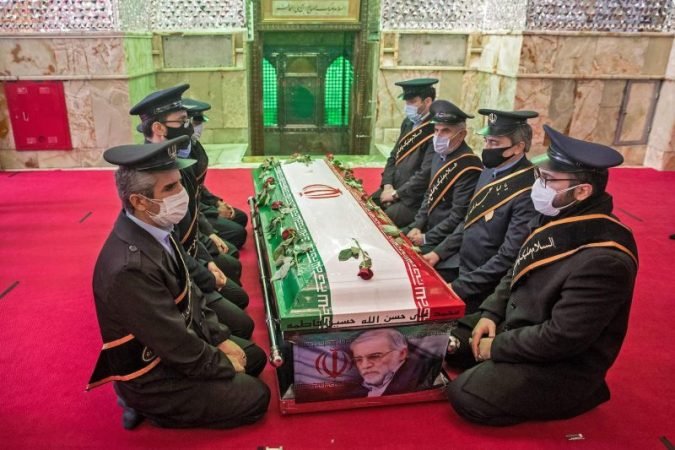 TOPSHOT - Members of Iranian forces pray around the coffin of slain nuclear scientist Mohsen Fakhrizadeh during the burial ceremony at Imamzadeh Saleh shrine in northern Tehran, on November 30, 2020. - Iran said Israel and an exiled opposition group used new and "complex" methods to assassinate its leading nuclear scientist, as it buried him in a funeral befitting a top "martyr". Fakhrizadeh died on November 27 after his car and bodyguards were targeted in a bomb and gun attack on a major road outside the capital, heightening tensions once more between Tehran and its foes. (Photo by HAMED MALEKPOUR / TASNIM NEWS / AFP) (Photo by HAMED MALEKPOUR/TASNIM NEWS/AFP via Getty Images)
PDF Button

EXECUTIVE SUMMARY: This past Friday, the architect of the Iranian nuclear program, Mohsen Fakhrizadeh, was assassinated in a well-organized raid 70 km outside the city of Tehran. A commander of the Islamic Revolutionary Guard Corps (IRGC), Fakhrizadeh headed the important Organization of Defensive Innovation and Research of the Ministry of Defense, which conducted nuclear weapons research. His killing reflects a major breach in Iranian counterintelligence and could indicate that the regime’s intelligence and security apparatuses have been compromised. Iran will have to respond to Fakhrizadeh´s assassination, but will likely do so in a manner that avoids full-scale war.

On Friday, November 27, 2020, at 18:17 Iranian local time, the Ministry of Defense and Armed Forces Logistics (MDAFL) of the Islamic Republic of Iran issued a press release stating that Mohsen Fakhrizadeh had been assassinated. It confirmed that a car containing Fakhrizadeh had been attacked and that he was fatally injured during a shootout that broke out between his attackers and his security detail.

Information on Fakhrizadeh is highly limited. His full name was Mohsen Fakhrizadeh Mahabadi, and he was born in 1957 or 1958 in the religious city of Qom. He was married and had three sons. He was a brigadier general of the Islamic Revolutionary Guard Corps (IRGC) and a professor of nuclear engineering. He was linked with Imam Hossein University, which is run by the IRGC.

Fakhrizadeh is believed to have been the architect of the Islamic regime’s nuclear program, and his alias in governmental communications is assumed to have been Dr. Hassan Mohseni. He worked as a senior scientist at the MDAFL and previously headed the ministry’s Physics Research Center (PRC). Because of his vital role in Iran’s nuclear program, he was included in Foreign Policy’s 2013 list of the world’s 500 most powerful individuals. Because of Iran´s refusal to allow the International Atomic Energy Agency (IAEA) to interview Fakhrizadeh with respect to his time as head of the PRC, the UN Security Council sanctioned him in Resolution 1747 (March 2007).

At the time of his killing, Fakhrizadeh was head of the Organization of Defensive Innovation and Research (SPND). The SPND, based in Tehran, is supervised by the MDAFL and is focused on nuclear weapons research. (As it happens, Fakhrizadeh´s assassination took place on the same day the trial began in Belgium of an Iranian diplomat, Assadollah Assadi, who stands accused of plotting to bomb an Iranian opposition rally in 2018.)

Fakhrizadeh was assassinated at approximately 2:00 pm local time in the city of Absard, 70 km outside of Tehran. According to the Fars News Agency, a van near Fakhrizadeh’s car exploded simultaneously with a salvo of gunfire from a team of assassins. Iranian Minister of Defense Brig. Gen. Amir Hatami said in an interview that it was the explosion of the van that caused Fakhrizadeh´s fatal injuries. He said Fakhrizadeh was attacked while “traveling near Tehran today” without disclosing exactly where he was going.

Fakhrizadeh´s killing is believed to be the fifth assassination of a scientist connected to the Iranian nuclear program. The full list is as follows: Majid Shahriari (November 29, 2010); Dariush Rezaeinejad (July 23, 2011); Masoud Alimohammadi (January 12, 2012); Mostafa Ahmadi Roshan (January 11, 2012); and Fakhrizadeh (November 27, 2020).

There is no doubt that these assassinations, other attacks on the Iranian nuclear program, the killing of Qassem Soleimani, and the recent slaying of al-Qaeda´s number two, Abu Muhammad al-Masri, in Tehran, collectively constitute a grave counterintelligence failure on Iran´s part.

The elimination of Fakhrizadeh was highly professional and well-planned. The assassins had vital knowledge of both Fakhrizadeh´s security detail and his route. How could this be?

There are three possible scenarios, and they are not mutually exclusive. First, it could be that Iran’s counterintelligence organizations are weak, unstructured, and highly amateurish, and are not able to take even the most basic precautions to secure their intelligence and protect important officials. Second, the regime’s technology knowledge might be so poor as to leave it vulnerable to its opponents and/or foreign powers that are able to hack important databases and networks and thereby map sensitive individuals and locations. And third, the country’s intelligence community could be compromised. If this is the case, it means individuals inside Iran’s intelligence organizations are disclosing information directly to opponents of the Islamic regime.

Iranian reactions to the assassination

Soon after Fakhrizadeh‘s killing, Iranian officials blamed the “Zionists” and, as is customary, threatened the enemies of the Islamic Republic. Maj. Gen. Muhammad Bagheri, the armed forces chief of staff, stated that “severe revenge awaits the perpetrators of the assassination of martyr Fakhrizadeh.”

IRGC Commander-in-Chief Maj. Gen. Hassan Salami said “the perpetrators will be severely punished,” while Chief Justice Ebrahim Raisi wrote in a message that everything possible will be done to punish the offenders. Speaker of the Iranian parliament Muhammad Bagher Ghalibaf, himself an IRGC commander, declared, “Today, the way of appeasement is closed” and called for revenge. Minister of Intelligence Mahmoud Alavi assured the Iranian people in a press release that the Ministry “will avenge the blood of the dear martyr from the perpetrators.”

The day after the killing, Brig. Gen. Esmail Gha’ani, Commander of the IRGC Quds Force, said in a written statement that he sympathized with Fakhrizadeh´s family and promised to “ally with all the forces defending the Islamic homeland in avenging the blood of this dear martyr and all the martyrs of the terrorists and their masters.” The Supreme Leader issued a statement demanding that those who conducted and masterminded the killing must be “severely punished.”

Iranian newspapers had various reactions. Hardline and government-linked newspapers like Resalatand Iran, as well as centrist and pro-reform papers like Etemad, Ettelaat, Hamshahriand Shargh, all used quite neutral headlines on their front pages. Three other papers used more confrontational headlines. The IRGC-linked Vatan-e Emrooz (Homeland Today) printed on its front page: “They Will Strike If We Don´t”. The conservative Kayhan printed Khamenei´s statement on its front page calling for the severe punishment of those involved in the assassination. The English-language Tehran Times had a longer headline on its front page stating that Israeli footprints with the backing of the “incoming US” government could be seen.

How will the Islamic regime respond?

The elimination of Fakhrizadeh is a massive setback and an embarrassment for the Islamic Republic. As it has thus far failed to avenge the killing of Qassem Soleimani, there will now be renewed demands for retaliation. What, then, are the regime’s options?

Doing nothing is not an option, and the regime will have to act both at home and abroad. Domestically, the coming days—maybe weeks—could see operatives from the Ministry of Intelligence arresting one or more individuals on suspicion of links to the killing. In accordance with the regime’s modus operandi, these people will be paraded on TV, admit working for Israeli intelligence, and then be executed.

As far as options abroad are concerned, the regime has two choices: save face or go to war. Scenario one is the more likely. However, in order to show that it has done something, the regime might conduct a limited operation in which missiles or mortar shells are fired at Israel by Iranian proxies. In this way Tehran will show that it has retaliated and will thus save face. Behind the scenes, Iran will of course continue its malign activities against Israel and other countries deemed to be enemies of the Islamic Republic.

Scenario two would entail a serious Iranian attack along the lines of coordinated raids on Israeli embassies, the firing by Hezbollah of more powerful rockets at Israel, attacks on US forces in the region, or the launching of missiles at the UAE and Saudi Arabia. These more extreme scenarios are highly unlikely, as they would put Tehran on the brink of all-out war—a result the regime does not want at present. While Iran probably will respond to the killing at some point in a larger manner (as in the case of the attack on the Ayn Assad Airbase in Baghdad, which was a response to Soleimani’s killing), this will most likely take place after Joe Biden has been sworn in as president of the US. Until then, Tehran may well show restraint.

There are already indications that Iran will not act too rashly. On the day of the killing, Brig. Gen. Hossein Dehghan, a prominent IRGC commander, presidential candidate for the 2021 elections, and current military aide to the Supreme Leader, wrote on Twitter: “In the last days of their gambling ally’s political life, the Zionists seek to intensify and increase pressure on Iran to wage a full-blown war.” After writing an Iranian proverb suggesting that patience is important and one should not rush into things, Dehghan concluded, “We will descend like lightning on the killers of this oppressed martyr and we will make them regret their actions!” The day after the assassination, President Hassan Rouhani, in a meeting at the National Headquarters for Coronavirus Disease Management, mentioned the assassination of Fakhrizadeh and stated that “the relevant authorities will respond to this crime in a timely and appropriate manner.”

Dr. Ardavan Khoshnood, a non-resident Associate at the BESA Center, is a Criminologist and Political Scientist with a degree in Intelligence Analysis. He is also an Associate Professor of Emergency Medicine at Lund University in Sweden.