The United Nations and G4 reforms 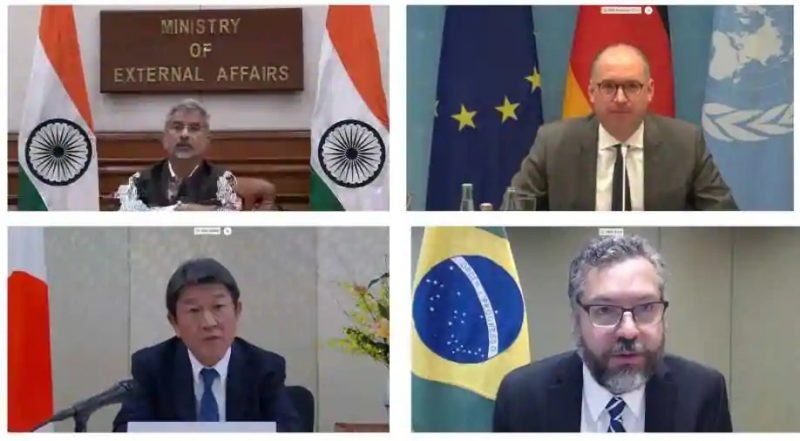 In a recent virtual meet held in the month of September, among the G4 nations it was observed that a force was being pushed towards bringing out certain changes in the United Nations Security Council reforms. The four nations stated that no meaningful decisions were being taken at the council and further updates are required to reflect up on the decision making state. This resolution was supported by many other UN members as well. This article focuses on analyzing and highlighting the points rose in the virtual meeting, summarizing the whole scenario and what the outcome has been for the same.

In the recent virtual meeting held in September it was highlighted that the G4 members are ready for a decisive push in the UNSC reforms and shall not delay it any further. The G4 nations discussed upon the issue of long overdue meaning full reform for the UNSC. The G4 countries will work with ‘other reform minded countries and groups’ to start a written text based negotiation about the said reform without any further delay in the procedure and to seek outcomes. One of the key points highlighted in the meeting was about the inclusion of the developing countries from Africa and their major contributions to the UN.

The G4 members reflected on the point, that what is most needed right now at the Security Council is to restore the confidence in international cooperation and governance. The statement released said that Africa needs to be represented in both the permanent and non-permanent categories of membership of the Security Council in order to correct the historical injustice against the continent in respect to its ‘under-representation’ in the Council. With the past delays in the process, G4 members expressed their disappointment about the same and have said that with no further delay this shall now be executed in the coming 75th anniversary. The G4 nations also stated that the right time has come to leave behind the debates based on general statements without any descriptive and strong text-based negotiations taking place at the intergovernmental settings. In a joint statement released by the members, they said that the world is not same as what it was 75 years ago and change in the various scenario is required to be adapted or else the council shall remain obsolete as a lot has been revised since then, more countries, more people and more serious challenges. The member nations went ahead to throw light on the fact that to maintain the international peace and security worldwide especially at the times of such crisis it was required by the Security Council to expand and include even countries from Africa to support the motto. Not only this but also the fact that India has long wanted to be elected as the permanent member at the council was put forward.

Key points from the meeting are as follows-

G4 countries have come forward in support of each other’s candidature for the permanent seat in the Security Council and have also been backed by the P5 countries including the US, UK, France and Russia except for China who does not stand in favor of the UNSC reforms decision. Other than the P5 countries, Bhutan has also come in support of this decision of G4 countries. Bhutan Prime Minister stated in his speech at the United Nations General Assembly that ‘Bhutan has long wanted the G4 members to become a permanent member of the UNSC with Africa also being included’. He added in his speech appreciating the meeting and said times like these, when the world is fighting a deadly virus, it is highly appreciable that such wise decisions are being taken up.

Although, China has opposed and expressed its concerns towards these reforms and is nowhere in position to have TBN for the intergovernmental negotiations on a platform wherein the matter raised for change is a sensitive topic. China in the past has also expressed its views on the inclusion of any G4 members on a permanent basis, stating that it has had historical differences with both India and Japan and that China does not consider Germany a developed nation. After the G4 nations meet, the Chinese Foreign Minister’s spokesperson said that China’s long-held dismissive attitude towards the G4 nations will not change easily. A spokesperson mentioned that China is willing to work with the other UN members to seek a package which is good and supportive enough to accommodate the interests and wants of all the parties. He further added that reforms in the Security Council is an important issue which concerns the long term interests of the members of the council and cannot be changed or worked upon in a night. Words from China’s side have also mentioned that reforms of the UNSC should be in such a way that they increase the representation and opinions of both medium and small size countries and they should be given a platform to participate in the decision-making process of the council as well. Analysts have also mentioned that China for quite some time now has been standing on the road of India’s entry to the UNSC. On January 1st, 2021, India will commence its two-year long term as a non-permanent member of the Security Council. India for a very long period has been in the process to reform the Security Council stating that with no changes introduced in the council, the Council shall remain outdated and obsolete.

After a long struggle of delays and repercussions, the G4 has finally been able to introduce and implement the reforms in the United Nations Security Council with support of the four P5 countries except for China and its reason of opposition. With the fact that with no further updates being implemented in the council, the practices stand out as outdated and obsolete hence the required decision will be implemented with time. There is a clear need to expand and encourage the role of other developing and non developing countries in the decision making the process of the Security Council in order to enhance the participation of countries around the world. This shall also maintain ‘international peace and security’ worldwide. Text-based negotiations will also be implemented in further decision-making procedures. Other than this there have been oppositions about the reforms from countries too like Italy and Spain oppose Germany’s bid while Pakistan opposes India’s bid. The final outcome will be cleared for G4 in the 75th session of the General Assembly.

Krati Anuj Seth is a professional, majored in Economics with demonstrated abilities in research, analysis and writing articles.