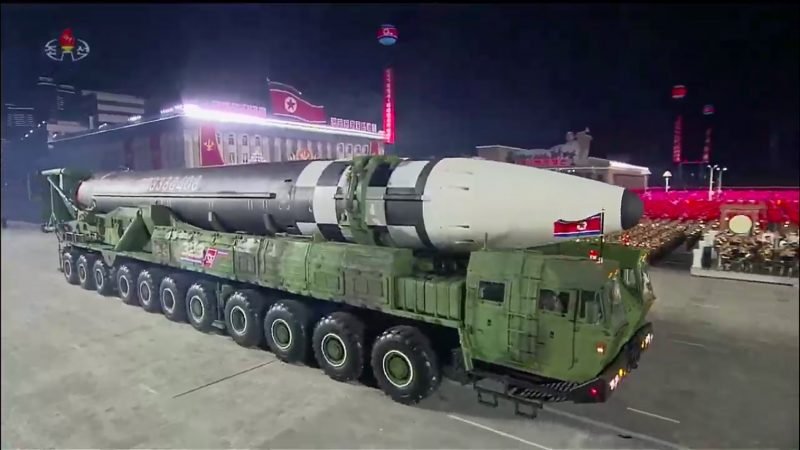 A screen grab taken from a KCNA broadcast on October 10, 2020 shows what appears to be a new North Korean intercontinental ballistic missile during a military parade marking the 75th anniversary of the founding of the Workers' Party of Korea (Photo by -/KCNA VIA KNS/AFP via Getty Images)
PDF Button

North Korea, in its military parade on the occasion of 75th anniversary of the country’s ruling party in Pyongyang on 10 October 2020, has showcased a variety of weapons including an alleged highly advanced nuclear-capable Inter Continental Ballistic Missile (ICBM). Consequently, a discourse on the relentless advancement of a nuclear weapon as well as a delivery system by North Korea amid global sanctions is erupting. This manifests the insufficiency or irrelevance of global endeavours being embraced to obstruct nuclear proliferation worldwide. North Korean attempt pertaining to nuclear advancement and development of nuclear-capable ICBMs are the reflections of the security dilemma generated due to its hostility with the USA. Paramountcy of security among all national interests has stipulated this country to develop its nuclear programme. It is noteworthy that the introduction of Nuclear non-Proliferation Treaty-1968 (NPT) has explicitly bifurcated the entire globe into Nuclear weapon states( NWS) and Non-nuclear weapon state (NNWS). Without any time-bounded restriction on NWS for their complete denuclearization, it is biasedly preventing other nations merely from acquiring nuclear weapons. Thus global stratification between “elite with nuclear weapons” and “non-nuclear weapons states”, accompanied by nuclear deterrence requirement stimulates any country to embark upon nuclear weapons programs.

In fact, global sanctions on North Korea has obstructed all developmental opportunities alongside striving to prevent nuclear program, but simultaneously it has generated a sentiment that if North Korea has no opportunity for economic development due to sanctions, why it should stop nuclear weapon development, which is the only option for ensuring self-existence in case of war with the USA. Lack of “complex interdependence” as well as “isolation from global institutions” has facilitated an encouraging environment for nuclearization options. North Korea, which is conceived as a rogue state, which has not been stopping its nuclear weapon programs despite global sanctions, can be prevented from it by generating complex interdependence.

It is noteworthy that showcased most destructive ICBM in a military parade in North Korea manifests explicitly its relentless strive for enhancing arms capability. But despite the fact that security dilemma is forcing North Korea for strengthening armed capability as well as inducing nuclearization, it is yet unclear that all these are for maximizing security merely not for any offensive purposes. Thus, it has been creating security threats for both the neighbouring countries- Japan and South Korea, who are very close allies of the USA. It can be observed in expressed concern of South Korea, which has urged again North Korea to abide by its previous disarmament pledges. The defence minister of South Korea further urged in a statement its neighbour to return to talks aimed at achieving complete denuclearization as well as peace in the Korean peninsula. It is noteworthy that except military parade, North Korean leader Kim Jong Un has cited the coronavirus pandemic, sanctions and natural disasters as the three hardships being faced by them. Words used in Kim’s address such as ‘grave challenges’, ‘countless ordeals’, and ‘disasters unprecedented in history’, have been conceived by the global community as the reflection of the pressure on North Korean leader due to imposed sanctions. But it should not be forgotten that on the one hand, he has developed the nuclear-capable missiles, simultaneously he was very emotional for his failure in providing adequate and satisfactory life despite people’s continuous supports. It manifests another indirectly but his development-oriented emotions for North Korean peoples. But amidst all these happenings, security dilemma due to the advancement of the nuclear capability of North Korea is again inducing another arms race in Japan and South Korea. Lack of democracy in North Korea as well as being a rogue state increases the security threat to neighbouring countries.

It is explicit now that economic sanctions merely has been inadequate for preventing nuclear proliferations as well as missile development in North Korea. It is because of security dilemma erupting from hostility of North Korea with USA. So there is a need to make a convincing  environment full of confidence building measures (CBMs),which would be to dismantle all the possible perceived security threats to North Korea. Complex interdependence generation through economic activities as well as by promoting engagements with global institutions would be facilitating long lasting peace in peninsula.

Furthermore, new revolutionary and radical actions towards complete nuclear disarmament should be taken by all de-jure as well as de-facto nuclear weapons states in order to dismantle catastrophe associated with nuclear weapons. Talks and negotiations for new START treaty, which is about to expire by 2021, must be restarted between USA and Russia for further nuclear disarmament. That will definitely further global initiatives of nuclear disarmament by obstructing the eruption of environment based on nuclear elitism as well as race for nuclear deterrence. There is a need to enhance environment of collective security rather than balance of power based international politics. That will, on the one hand, remove all the security dilemma; but simultaneously on the other hand, it will generate a situation where no single country would even think to attack other nations.

Moreover, Gandhian principle of non-violence instead of nuclear race, as United Nations secretary-general Antonio Guterres has asserted on the occasion of International day of Non-violence on 2 October 2020, must be embraced for establishing long lasting peace. In fact, Non-violence does not mean merely pacifism rather it is very broad concept. Along with repudiating violent actions, preventing bad thinking for anybody else as well as rejecting grabbing another’s part of resources are indispensable part of non-violence. Thus establishing egalitarian world as well as stimulating fraternity, pacific settlement of all contentious issues globally would be peace stabilizers. Gandhi ji has further perceived poverty as the worst form of violence. So the world must get rid of all these challenges for peaceful world. If North Korea will be provided opportunities for economic development alongside economic interdependence with global system, it will be human rights promotion of North Korean peoples too; simultaneously, it would diminish the nuclear race too.

If the world starts to venture towards developmental activities rather than violent actions along with the erupting threat of nuclear catastrophe, it would definitely be a reason for a peaceful and prosperous world.