G4 Nations meet to push for reforms in the UNSC: A change underway? 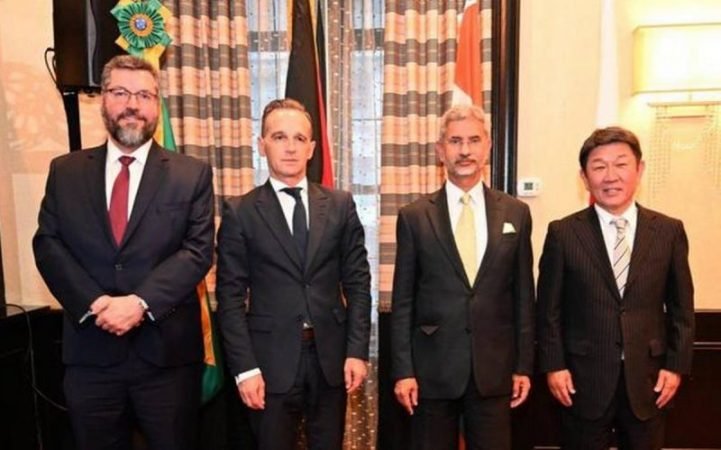 The United Nations Security Council, as the most coveted body of the United Nations, have been subjected to reforms since almost over a decade now. The reforms categorically direct towards the representation of nation-states in the UNSC, especially with regards to permanent membership. The constitution of the Security Council reflected the arrangement of geopolitical order prevalent post World War II, but with changing trends in global politics and rise of regionalism, the question of a change in representation knocks the door of the organization. The basic point of the argument is not only to concentrate the veto power to 5 permanent members (USA, United Kingdom, China, Russia and France) but rather extend them to countries who have committed themselves towards development and displayed self-confidence throughout the process of decolonization and democratization.

The world order of 1945 was mostly divided into the axis and allied powers which were again altered in the 1990s when the US emerged as a single superpower, post-Cold War. But what has been disregarded throughout the Cold War was the Non-Alignment Movement (NAM) led by India which reached the corners of almost all African countries. India has committed itself to emerge as a regional power (which it did) and not fall into the hands of any disguised ‘imperialism’ again. The similar portrayal of policies was shown by Brazil, Japan and Germany. Each of these countries has led their movements, made the mark in global politics and yet are denied true representation in the UNSC. The confluence between Brazil, Germany, India and Japan in 2005 came to be known as the G4 nations and this confluence aimed at procuring permanent membership in the UNSC.

As the United Nations commemorated its 75th Anniversary on 21st September 2020 with the new branding of multilateralism and international cooperation, it becomes imperative to talk about reforms. The institutions must realize that adhering to old frameworks and procedures have high chances of turning these very institutions obsolete and redundant. Under the UN75, the G4 nations virtually met to discuss the ‘decisive push’ for reforms in the Security Council. The meet was embraced by Ernesto Araújo, Foreign Minister of Brazil, Dr Subrahmanyam Jaishankar, Minister for External Affairs of India, Motegi Toshimitsu, Minister for Foreign Affairs of Japan, and Niels Annen, Minister of State at the Federal Foreign Office of Germany. The meeting laid down the wishes of the G4 nations and their vision of a more diverse Security Council.

Stressing upon the fact that the United Nations isn’t the same as it was 75 years ago, the decision-making bodies must reflect the realities of the contemporary world. The Joint Press Statement highlighted that extending membership in the Security Council will ‘contribute to the maintenance of international peace and security’, thus securing the credibility of the organization. The G4 nations also reiterated over the fact that the UNSC has to realize the role of developing countries to make it more legitimate and enhanced. The press statement also mentioned the efficacies of African countries as permanent members of the council. Doubts over the Intergovernmental Negotiations (IGN) were raised as to the present day it is criticized for lesser transparency. The closing of the Press Statement read, “what is needed is a representative UN Security Council to help us restore confidence in international cooperation and global governance – urgent more than ever in these testing times.”

What started as ‘An Agenda for Peace’ by former Secretary-General Boutros Boutros-Ghali in 1992 has now culminated into a strong and comprehensive plan to do away with archaic procedures and uphold the values of the world as it stands today.