Poland – The most homophobic country of EU 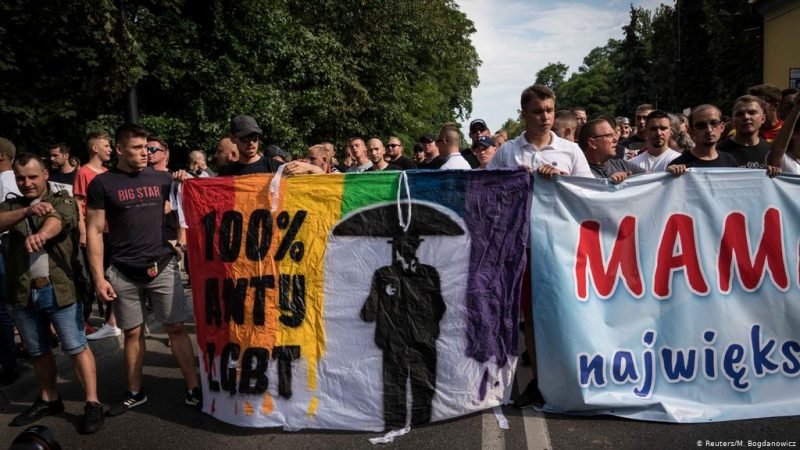 On 5th August, three men were arrested in Warsaw for offending religious sentiments and desecrating monuments. Their crime was hanging a pride flag from the statues of Jesus Christ, Astronomer Copernicus and the Warsaw Mermaid. The faces of the statues were also covered by a pink mask with an anarcho-queer symbol scribbled across it. This incident conveys a strong and wilful statement by the LGBTQ+ activists that they are not going to be hindered by the policies of an intolerant and homophobic Government.

Poland has never been a very accepting country for the community. Poland emerged from the communist rule as a conservative and homogenous society. It did not help that the Roman Catholic Church which pioneered and supported the democratic movement in the country, was not very supportive of the LGBT community either. There were reforms in the future for the community but as soon as President Andresz Duda got elected President in 2015 and his party, Justice and Liberty Party (PiS) gained a majority in the parliament, the conditions worsened. With him being elected, there arose a huge wave of Anti LGBTQ+ sentiment.

The situation even deteriorated when the anti-LGBTQ propaganda became a central part of President Andresz Duda’s election campaign for his second term. His opposition candidate, Rafal Trzaskowski, the mayor of Poland, was a pro-LGBTQ candidate who signed an LGBT charter which promised rights to the community as a part of his campaign, aimed at being more inclusive. In response to his charter, President Andresz signed the Family Charter which spoke the language of Russia’s Protection of Children’s Law. As per the Charter, he promised no support for gay marriages, banning adoption by same-sex couples and also banning the teaching of the LGBTQ ideology in schools and public institutions. He also claimed that the LGBTQ+ movement was “more destructive” than communist forces. The 2020 presidential election was said to be a choice between a red and white Poland or a rainbow Poland. President Andresz Duda secured an election win by a narrow margin of 51% but his victory is still considered to be unfair and rigged by the supporters of Trzaskowski.

There was also a huge response to the blatantly homophobic Presidential campaign of President Duda. There was an elaborate statement addressed by the community to the President in which they clearly specified that there is no such things as an LGBTQ ideology, but it is merely a homophobic construct. There was a huge protest staged in front of the Presidential palace in Warsaw in the form of a silent disco. These protests and marches were meaningless to the President because no opposition candidate was ready to support the much controversial cause. The media and the Catholic Church also aid to the homophobic rhetoric in the country. Krakow Archbishop claimed the dawn of the “rainbow plague” upon the people and the media equated homosexuality to paedophilia. The negative propaganda, as well as the support of all major Institutions of the country to homophobic rhetoric, makes the situation difficult for the community. It very clearly shows from the way Poland slipped from 33rd rank in 2013 to 42nd in 2020 out of 49 countries in the ILGA-Europe Rainbow Map’s Annual Review of LGBTQ+ acceptance in Europe.

According to the “Atlas of Hate” map, an area greater than the size of Hungary has been declared as an LGBT free zone in the country. Almost a hundred municipalities as well as five Voivodships (the biggest administrative areas of Poland), have passed the Pro-family resolution or the anti LGBTQ+ propaganda, which makes them hostile to anyone who claims to be from the community. Six of these cities recently applied for grants under the Twinning Programme which was denied on the grounds of violation of rights and equality of citizens. Poland has invited much criticism from EU as well as the world regarding it’s handling of the LGBTQ+ issue. Poland has already been deemed as the most homophobic country in the EU as in the name of protecting the sacred institution of family, it planned to completely annihilate the biggest threat to it, which it claims is the LGBTQ+ forces.

As the rightist conservative government of Poland continues to demonise the “LGBTQ Ideology” and reduce it to a western tool to corrupt their Christian values, the homophobic sentiments of the citizens are legitimised. This makes the road to acceptance and acquiring basic rights for the LGBTQ+ community in the country, an uphill battle. The international resentment to the divisive policies of the current government grows as Poland continues to disregard its citizens because of their sexual orientation.