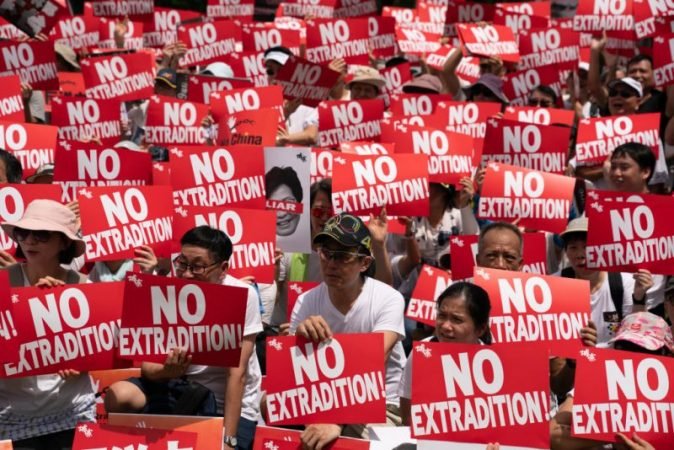 Protesters hold placards and shout slogans during a rally against the extradition law proposal on June 9, 2019 in Hong Kong China. Hundreds of thousands of protesters marched in Hong Kong in Sunday against a controversial extradition bill that would allow suspected criminals to be sent to mainland China for trial.(Photo by Anthony Kwan/Getty Images)
PDF Button

Contentions related to the Extradition Treaty of Hong Kong have resurfaced again. The Extradition Treaty initially was signed by Hong Kong with 20 different countries, of which many have now denied to ratify the agreement made. The treaty initially stated that it will not include the Central people’s Government or the government of any other part of the People’s Republic of China. But then the scenario changed with a new proposal that would allow the extradition requests for criminal suspects from countries with which it does not maintain any formal relations, indicating Taiwan, China and Macau.

The proposal came in the light of a criminal suspect who fled a scene of murder from Taiwan and settled in Hong Kong last year. Carrie Lam, the Chief Executive of Hong Kong urged the people to understand the sanctity of the crime and that with the new proposal the special administrative region will be in a position to establish better law structures and judicial activity. The Fugitive Offenders and Mutual Legal Assistance in Criminal Matters Legislation (Amendment) Bill, 2019 was introduced in March 2019. The bill included those territories with which Hong Kong maintains no formal record will be able to extradite a suspect accused of any 37 offences, including corruption, money laundering, sexual assault and murder to name a few. But the people of Hong Kong have a different narrative and approach to understand the mandate.

The people of Hong Kong worry about China’s interference into their autonomy and that rather than targeting the actual criminal suspects, it could end up putting political activists and lawmakers up for trials. Remembering China’s 2015 plan to kidnap ‘dissident’ booksellers from Hong Kong who were later asked to shut down their business, the people of Hong Kong fear that a similar fate would follow for almost all the citizens. Although the law allows the Chief Executive to approve any extradition request, the people fear that their subordination to China may entirely flip the picture of delivering the so-called justice.

Reiterating the agreement which was initially signed by 20 countries, the renewed mandate has attracted attention from the international community. It is a well-known fact that Hong Kong has maintained extreme financial relations with the West, especially the United States of America. However, the recent unfolding of the political movement in Hong Kong has put to question its financial autonomy. The bigger criticisms have been towards the imposition of the National Security Law by mainland China on the people of Hong Kong

The Ministry of Europe and Foreign Affairs, France released a statement that it will now not ratify the Extradition Treaty, 2017 with Hong Kong after this whole episode of China’s National Security Law flooded the city. The statement read, “In view of the latest developments, France will not proceed as it stands with the ratification of the extradition agreement signed on May 4, 2017, between France and the Hong Kong Special Administrative region.” The Ministry further justified its actions calling out the direct implications the ‘new law’ would have on the French people and their business. France reminded that new law clearly violated the fundamentals of ‘One country, two systems’ and that the law is an attempt to curb the freedom and autonomy of the people of Hong Kong.

France joins the list of countries, including Germany, Canada, Australia and New Zealand who have decided not to ratify the Extradition Agreement with Hong Kong.