Long Battle of Afghanistan’s Women- from Taliban Regime to Today 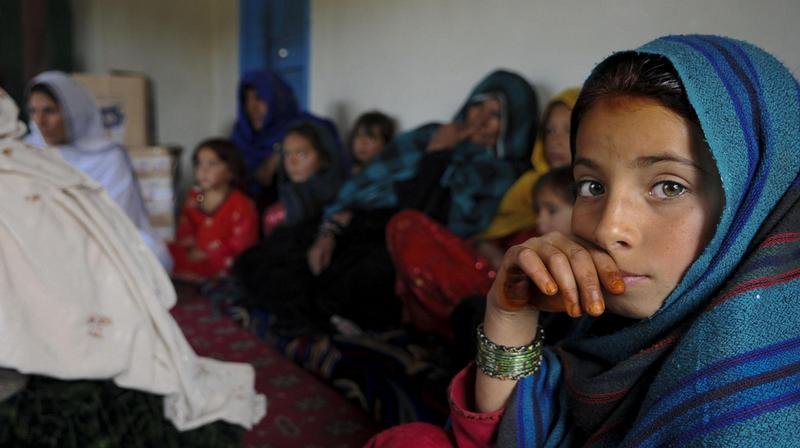 Afghanistan is situated at the crossroads of Central Asia, South Asia, West Asia and the Middle East is a landlocked country. The country has been torn apart by war since a decade. Throughout the 19th century, Afghanistan has been a battleground for communist Soviet troops and the United States-led international forces, and for years has been ruled by militant groups. Every Afghan desperately seeks for peace in their motherland now.

In March 2020 the United States and the Taliban signed a peace deal. Under the terms of the deal, the U.S. will withdraw all his soldiers within 14 months and Taliban guarantees that Afghan soil will not be used as a launchpad that would threaten the security of the US, the government of Afghanistan and will do the negotiations by March 10; and a permanent and comprehensive ceasefire. It was a potentially historic agreement.

But this deal bought fear more than a hope for peace for Afghan women. Afghan women have suffered for 40 years because of war. Women are caught between hope that peace may finally be in sight and fear about their rights and lives in future, and to the freedoms, they won after the Taliban. The key question is how will the rights of women will be protected after the U.S. troops leave?

Tracing back the winters of 1994, a new group named “Taliban” emerged as a military and political force. The group was formed by Afghan mujahideen and Islamic guerrilla fighters. Taliban means “students of Muslim religious studies.” This movement was led by Mullah Mohammed Omar, a 31-year-old religious leader. Many young Pashtun tribesmen who studied in Pakistani madrassas and seminaries joined the group.

Taliban promised to fight corruption and improve the security in the country as Afghans were tired of the excesses and infighting of the mujahideen during the civil war but it rather emerged as an extremist group. They first rose eminence in the border area of northern Pakistan and south-west Afghanistan in 1994. In September 1996, the Taliban seized the capital, Kabul, from President Burhanuddin Rabbani, an ethnic Tajik whom they viewed as deviant and corrupt. After capturing Kabul they gradually started ruling most of the country within two years and declared Afghanistan an Islamic Emirate. The economy of Afghanistan paid a huge price with no proper banking, infrastructure and communication systems during the war.

Afghan women paid the heaviest price. When the world was moving towards development and making gender equality and education a priority, Taliban abused basic rights of women and held them back. Taliban enacted extremely severe gender policies and justified them with their own version of Sharia Law.

They forbid the education of girls and women from working, forced them to cover themselves from head to toe in public, preventing them to go out of the house alone and preventing male doctors to treat them unless they were with any male family member which caused many deaths. Even riding bicycles, wearing brightly coloured clothes, and laughing loudly was not allowed. They even used women captured from the country’s internal war as slaves.

Many women started attending underground schools or home schools, where they and their teachers risked execution if caught. Rapes and violence against women increased. Taliban enforced strict rules with harsh punishments like beating and killing women publicly for even minor violations of rules. Gradually, women started becoming invisible in Afghanistan’s society.

According to United Nations Report, “Thousands of Afghan women were widowed, displaced, and disabled due to the war where they lost their husbands and family in the early regime of Taliban,” because of which they were forced to beg and become slaves. Afghanistan is called one of the world’s widow capitals.

In October 2001 the United States and its international and Afghan allies invaded Afghanistan, the Taliban regime collapsed and its fighters ran away to Pakistan. A new US-backed government took over in 2004, women rights started improving and once again women were put equal to men in the 2004 constitution just like 1964. Girls started going back to school and women returned to their work gradually.

According to several reports when Taliban regime collapsed, many fighters ran away to Pakistan or in areas around the border of Pakistan, Taliban got support in areas around the Pakistan border and made hundreds of millions of dollars from drug trade, mining and taxes in a year. In 2006, Taliban started gaining control in certain areas near border of Pakistan and started attacking again Afghan citizens, forces and government officials. They started attacking schools and colleges in the areas that were in their control. Last year Taliban set fire two girl’s schools in Naw Deh, in Farah Province. They use schools in those areas as their training camps. Attacks on girl’s schools are at rise.

According to the UNHCR, the UN refugee agency, there are almost 2.5 million registered refugees from Afghanistan – the second-largest refugee population in the world. As the Taliban claws back power, and as violence continues to tear through the country, the numbers will rise.

Afghan women fought ferociously for equality in the years and they have made great progress. Over the past decade, millions of girls have been educated, female doctors and teachers work across the country and 25% of the country’s politicians are women. In Afghanistan’s parliament, the percentage of women is higher than in the U.S. Congress. There are women who are governors and judges and police officers and soldiers.

But still, there is a low literacy rate especially in rural districts with a conservative population. According to a report, Afghan government and international donor efforts since 2001 to educate girls, an estimated two-thirds of Afghan girls do not attend school. 87 percent of Afghan women are illiterate, while 70-80 percent face forced marriage, many before the age of 16. The Economic problems in the country, decline in international support, no proper schemes by the government and increase in poverty are giving rise to dangerous situation women and girls are facing. There are still cases of lynchings and stonings, particularly in families of village communities. Women are still poisoned, tortured and oppressed. There are no laws to prevent these kinds of incidents, such as the Elimination of Violence against Women (EVAW). In spite of difficult and extremely dangerous situations, now more and more women are making their voice heard – against injustice and for political representation in the country

As of early 2020, Taliban controlled almost 18% district and government controlling 33% district in Afghanistan. Taliban has moderated somewhat in subsequent years, few Taliban commanders permit girls to attend primary schools, typically in response to community pressure. But there still many Taliban who continue to carry out violent attacks on girls’ schools and block women and girls from exercising many of their basic rights, and remain deeply opposed to gender equality. Afghan women are afraid that after the U.S. army will leave such attacks on girl’s schools and blocking them to exercise their rights will increase more.

Afghan women have made it clear that they are different from the generation that the Taliban controlled. They are loud and clear that they won’t go back to the traditional roles when they were subject to public humiliation, flogging, and exclusion from social, political and economic rights. They are not ready to give up the long-fought freedom of their basic rights.

According to Dr Dawood Azami on the status of women and gender rights in Afghanistan in wake of a possibility of Taliban sharing power or even taking control over state power in the fledgeling democracy, “Afghanistan is not an exception here. In many countries, especially many Muslim countries and even non-Muslim countries, women don’t have proper representation based on population. Afghanistan is one of such countries. Taliban have indicated that they have changed, they have learned the lesson. Somehow they accept that mistakes were made when they were in power from 1996 to 2001. And they also say that they won’t be repeating those mistakes. So, this is the kind of impression they want to give to both the Afghans and the international community. There are signs that they have changed in some ways. For example, they had banned the internet when they were in power in Afghanistan. Now, they are using the internet themselves. They had declared the videos, photography or any depiction of living beings (including humans and mammals) as illegal and un-Islamic.. Now they are producing their own videos, they are publishing pictures of their leaders and fighters on their website and social media. So, there is a change. They also say that they are not against the education of women or women working in offices. They repeatedly say that they will give all the rights to women which are permitted in Islam. But then it is up to their interpretation of certain principles and teachings of Islam. We don’t know what will be the restrictions that will be imposed on society after a political settlement between the Afghan government and the Taliban. But it is clear that both sides will have to make concessions. Human rights groups and members of the international community have raised concerns about possible shrinking of liberties in Afghanistan. The Americans insist that gains made over the past nearly two-decades should be preserved. But several US officials have also said that it is up to the Afghans to decide what kind of society and political system they would like to have as an outcome of the peace deal?”

Dr Azami further added “It is important to note that the Taliban are in a different role now. They are an insurgency and an armed group. What will happen when they become part of a future government or establish their own government? We don’t know. But it is up to the negotiators from both sides (i.e. the Afghan government and the Taliban) to show the necessary flexibility and agree on a mechanism and process, which is acceptable to not only the warring factions but also to the wider society. Because Afghanistan is a diverse country, there is a divide between educated and uneducated Afghanistan; between urban and rural Afghans; between conservative and “modern” Afghans – therefore, their lifestyles, expectations, demands and aspirations,  are different. Social cleavages are intensifying and divides are widening due to the ongoing conflict. So, the priority for all sides should be to end the conflict. I know it is a challenge for both sides to reach an arrangement, which is not only acceptable to their respective leadership but also deals with the hopes and concerns of their constituencies as well as the ordinary Afghans. On the other hand, the conflict itself is causing a lot of suffering to all sides. If the conflict continues, there will be more and more human rights violations. Many people across the country are killed in the war on a daily basis, which means that even the right to life is being violated.  In addition, freedom of speech, right to education or right to work and many other rights are being violated in Afghanistan on a daily basis because of the ongoing conflict. This itself is a tragedy. So, my hope is that once there is peace, the leadership at different levels should be able to resolve the tensions and divides that exist in the society, unite the people and channel their energies in a positive manner..”

Protecting women’s rights needs to be one of the priorities of the of Intra Afghan process, and for that to happen, women need to be at the negotiating table. Afghanistan Government should increasingly recognize that the role of women in peace processes is critical to sustainable and implementable peace accords. The government and all its international partners need to support Afghan women, who are in the fight of their rights.

The London-based think tank The Democracy Forum recently organised a high-level discussion on the future of Afghanistan, involving experts from a number of countries. The whole event is available to view on YouTube.