Russia-Syria relations and its implications for the Middle East: 2000-2020 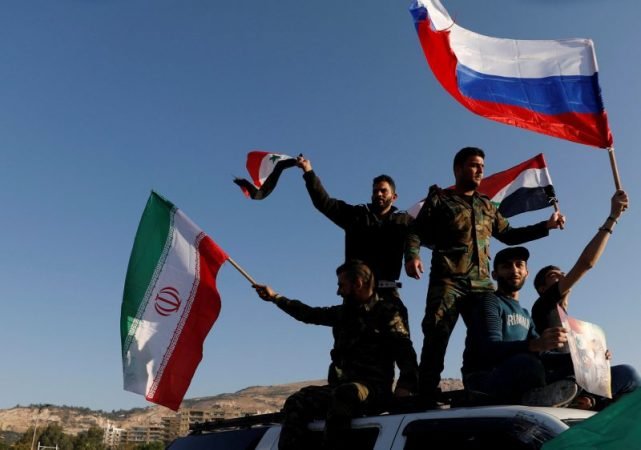 Russia’s involvement in prolonged Syrian civil war transcend not just a reciprocal relationship between both the counties as Russia has been strategically benefitting from its presence in Syria,  but geopolitically rather than recompense. Russia officially made its decision to send its forces in support of the Bashar al-Assad regime in the year 2015 which added to existing instability in the state leading to major repercussions for the Middle East. Moscow publicly made its intentions clear, to counter-terrorism in the state and uphold stability but it motives lies beyond security reasons. Syria is the closest ally of Moscow and acts as its only foothold in the region. After Putin came into power in 2000, his desire to revive Russia’s great power status and preserving Russia’s unity became its preeminent task. Its interest in the Middle East and its supply of arms in Syria and ties with Iran clearly displays its enthusiasm in the region.

Russia Syria friendship dates back to 1971 when Hafez al-Assad formally seeks help from Russia in need of weapons. Syria became a decisive partner to Russia after it lost Egypt, its only Arab ally. In a country with the majority of Sunni Muslims, many groups in Syria refused to accept Assad regime which was supported by a small percentage of Alawi community (Theodor, 2015). Therefore it became vital for Syria to take support from external power for its economic, political and military needs. Russia also helped its ally in its domestic matters to suppress and impose ruthless control over its own people. However, both Russia and Syria have comprised of multi-ethnic religious groups and elites of both countries are supporters of centralized states and critical about popular uprisings and movement that has created instability in the region.

After the disintegration of USSR, both Russians and Syrians turned west in the desire of cultivating a relationship with Washington which was reflected through Russia’s initial support of US intervention in Afghanistan and Syria’s support of America’s war against Iraq. The Rapprochement could not last long with the failure of Assad Clinton summit in Geneva and the formation of Russia’s foreign policy towards reclaiming its greatness.

One of the key component of Russia’s foreign policy both pre and post Cold war period remains in finding a suitable market for the sale of its arm equipment. The first sophisticated weaponry sale to Syria was signed in the year 2000 with an amount of $2biilion. Moscow remains the only greater power to support Damascus internationally (Rod, 2019).

The naval base in the Tartus anchors Russia to the Mediterranean sea. During the Soviet period, it maintained a high navy vigil in the Mediterranean sea but after the cold war, it was incapable of maintaining so due to its economic frailty. Building a vassal in Tatrus is a way of reasserting Russia’s greatness post-cold war. In 2017 Russia came in agreement with Assad to extend its lease in Tartus for the next 49 years. Russia is trying to cement its naval bases in Syria by increasing the number of vassals (Rod,2019).

Major implications for the Middle East

After the disintegration of USSR, the accompanied Foreign policy focused on preserving its relationship with former Soviet members through CIS. When Primakov took as the new foreign minister he sought to reassert its traditional ties with the Middle East. In order to develop connections with West, Primakov sought to build its allies in the Middle East (Sakwa,2008)

The relationship was not grounded on long term strategy instead very precise such as Russia’s technocratic groups located in Iraq (Roland, 2012). The rise of Putin successively presented him to take control over the entire machinery of the state including his command over the foreign policy decisions. Putin’s motive to build ties with the Middle East could not be fulfilled in the first part of his presidency but its relations developed intensely in the second part of his presidency.

The rejection of any ideological commitment and Moscow’s readiness to proceed through building diplomatic ties is a shift in Russia approach towards the region under Putin. Initially, its interest towards the Middle East largely focuses on countering the West in the region but Moscow changed its priorities to create diplomatic relations with the countries by keeping the complexities aside.

The Moscow policy towards the Middle East is not entirely on countering the West by supporting Syria, Iran, Hamas and Hezbollah but crushing rebels groups and terrorist groups like Islamic states which could even pose a threat to its own domestic security. Russia also received observer status in the Organization of Islamic Conference. Iran supports Russia’s decision in backing Assad with arms and deploying Moscow’s airbases at Khmeimim airbase. Both Moscow and Tehran have a convergence of interest in keeping the US out of the region. Tehran fears US presence in Syria will lead to regime change which might pose a threat to its own domestic politics. Russia is also authorized to use Iranian airbase for missile strikes in Syria.

Will the cooperation leads to active Tehran Moscow greater alliance or the relationship will remain intact to the Syrian issue. Russia’s relationship with Egypt gained some attention when in 2015 Ibrahim Mahlab attributed to Russia’s great power status (Mortiz, 2019). Egypt backed Russia’s demand of not excluding Assad from participating in any peace dialogue regarding Syria. Putin visit of Israel in 2005 shows the mutual gain relationship of both the countries. Russian Diaspora in the State of Israel is also one point for their rapprochement other than terrorism and economic issues.(Roland,2012).  US 1000 troops withdrawing from Syria and Trump policies of American’s first is setting leverage for Russia to operate more freely in its near borders of the Middle East. It clearly shows the decline of the US role in Syria. Great power is withdrawn policies are definitely a setback for Turkey and the former US backs Kurds in Syrian soil. Specifically, Russia has a more favourable relationship with pro-western countries such as Saudi and Israel and other Gulf states.

Eleven years of conflict in Syria has destabilized not only the state but a major setback for the entire region. Moscow holds upper hand in recommending the Assad regime to solve the crisis taking into consultation many rebel groups. Russia is also keen on maintaining diplomatic ties with the Middle East so it does not remain aloof due to its sanctions by the US and EU for its occupation in Ukraine crisis.  Syrian victory in the Middle East will legitimate Putin’s leadership domestically. Instability in the Middle East region indirectly is helping Russia to contend its Great power role. Stability in the region is a prolonged idea but it is interesting to see whether Russia’s willingness to cooperate with pro-western allies in the region might lead to a peaceful dialogue among the major actors or will Russia continue to benefit strategically from the Syrian conflict in the Middle East.