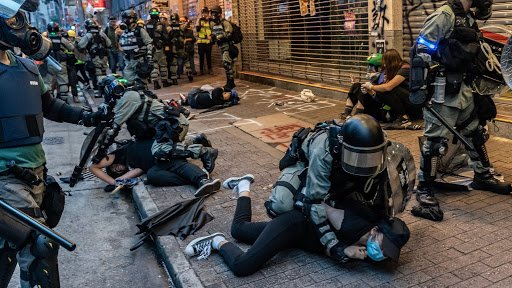 China’s new national security law gives Beijing broad powers to crack down on political dissent against the Chinese Communist Party. Critics say that the law, drafted behind closed doors in Beijing, effectively ends the “one country, two systems” framework under which Hong Kong was promised a high degree of autonomy. Experts say that individual countries have little leverage over Beijing on human rights. This comes at a time when a joint effort between the US and its traditional European allies seems unlikely at the moment.

The central Chinese government enforced the controversial new national security law in Hong Kong on June 30, just hours before the 23rd anniversary of the city’s handover from the United Kingdom to China. The ceremony, held on July 1 every year, marks the day that the former British colony of Hong Kong was officially brought back under the control of the Chinese mainland, ending 156 years of colonial rule.

As per an agreement brokered by the leaders of both nations at that time, which came to be known as the ‘One country, two systems’ plan, Hong Kong was to enjoy greater freedoms and a semi-autonomous status for 50 years, till 2047. But the Chinese government has slowly eroded Hong Kong’s autonomy in the years since.

The new law’s passage has further blurs the distinction between the legal systems of semi-autonomous Hong Kong, which maintained aspects of British law after the 1997 handover and the mainland’s authoritarian Communist Party system. China’s new national security law gives Beijing broad powers to crackdown on political dissent against the Chinese Communist Party. Critics say that the law, drafted behind closed doors in Beijing, effectively ends the “one country, two systems” framework under which Hong Kong was promised a high degree of autonomy.

Experts claim that the “deliberately vague” legislation leaves plenty of scope for interpretation and enable the authorities to target whoever they want. It directly targets some of the actions of anti-government protesters last year. The ambiguity of rules might allow police to take advantage based on “national security needs”. It undermines human rights and freedom of speech and communication.

The law makes secessionist, subversive, or terrorist activities illegal, as well as foreign intervention in the city’s internal affairs. Any person taking part in secessionist activities, such as shouting slogans or holding up banners and flags urging for Hong Kong’s separation from China or expressing support for independence for Tibet, Xinjiang and the self-governing island democracy of Taiwan, is now in violation of the law regardless of whether violence is used.

The most serious offenders of the legislation could receive a maximum punishment of life imprisonment.  At least 10 people, including a 15-year-old girl were arrested under the new national security legislation on July 1.

In addition to its vague and over-broad definitions of punishable offences, the new law says that it applies to offences committed outside Hong Kong, even by those who are not permanent residents of the region. Hence, it gives extra-territorial jurisdiction to Hong Kong authorities.

It grants power to the police force that is normally guarded by the judiciary. Hong Kong police can raid premises without a court warrant, order internet firms to remove content or seize their equipment, and demand information from political groups operating outside the city under sweeping new powers granted by the national security law. It mandates police censorship and covert digital surveillance, rules that can be applied to online speech across the world.

Internet firms and individuals have to delete any electronic messages or information online deemed a threat to national security. The power given to police regarding online and electronic platforms was worrying as it would allow them to obtain information and data from all companies based in Hong Kong.

Many big tech companies, including Facebook, Google, Twitter, Zoom and LinkedIn, have recently said that they would temporarily stop complying with requests for user data from the Hong Kong authorities. The Hong Kong government, in turn, has made it clear that the penalty for non-compliance with the law could include jail time for company employees.

US, UK and EU response

Last week, the United States Senate sent a bill to President Donald Trump that would impose sanctions on officials responsible for instituting and enforcing China’s new security law targeting Hong Kong’s autonomy. The legislation would place mandatory penalties on the Chinese officials who imposed the security law, as well as, police units that crackdown on protesters and the banks that finance activities trying to undermine Hong Kong’s independence.

The US has already begun moves to end special trade terms given to Hong Kong. The Trump administration has said it will bar defence exports to Hong Kong, cancel policy exemptions that give Hong Kong special treatment, and impose visa restrictions on Chinese Communist Party officials “responsible for undermining Hong Kong’s autonomy.”

British Prime Minister Boris Johnson held China in “clear and serious breach” of the Sino-British agreement under which Hong Kong had been handed over to the Chinese authorities.” Stressing a legal and moral duty to its former colony, Britain has pledged to open pathways to citizenship for up to 3 million Hong Kongers eligible for British National Overseas passports.

In Brussels, the European Parliament last month passed a resolution calling on the EU to consider taking Beijing to the International Court of Justice. Reinhard Butikofer, chair of the European Parliament’s delegation for China relations, said lawmakers are considering other measures, such as a ban on exports of “technology utilized to oppress Hong Kong citizens. Calling Beijing’s decision “deplorable”, the leaders of the European Union announced that the bloc would step up its efforts to reassess its economic relationship with China. The European Union warned that China risked “very negative consequences” to its reputation and to business confidence in the global financial hub.

Apart from many western governments, rights groups and the UN Human Rights Council have expressed alarm over the law.

Japan and Taiwan too expressed their disappointment over the enforcement of the legislation. In Tokyo, top government officials called China’s legislation “regrettable” while Chinese-claimed Taiwan’s cabinet in a statement said the new law would “severely impact” freedom, democracy and human rights in Hong Kong. Taiwan, the democratic island-nation, has opened an office to help those who were choosing to flee Hong Kong.

Experts say that individual countries have little leverage over Beijing on human rights and the impact of the above measures on China is likely to be marginal. International anger and statements of concern, without coordinated action, don’t seem to make any difference to the rights issue for the people of Hong Kong.

Steve Tsang, who directs the China Institute at London’s School of Oriental and African Studies, said that if the EU were to join forces on the issue with the “Five Eyes” alliance – the U.S., Britain, Canada, Australia and New Zealand – the group would have real economic clout, Indian Express reported. The EU is China’s largest trading partner.

It is to China’s advantage that US and EU are moving in different directions in many areas. US is involved in a trade war China and the EU doesn’t want to get involved into this. Given strained ties between the Trump administration and many of US’s traditional European allies, joint effort seems unlikely at the moment.

Since the UK government is focused on BREXIT, British Prime Minister Boris Johnson and EU are also unlikely to cooperate.

Zhao Lijian, Chinese Foreign Ministry spokesperson, said, “This issue is purely China’s internal affairs, and no foreign country has the right to interfere”. Beijing has repeatedly denied stifling Hong Kong’s freedoms, stating that the laws were necessary to maintain national security, aimed at a few “troublemakers” and will neither affect rights and freedoms, nor investor interests.

According to Chinese state-owned television broadcaster CGTN, Zhao said, “Over 70 countries have voiced support to China’s legislation for HKSAR and asked certain western countries to stop interfering in China’s internal affairs, which shows that people have no problem telling right from wrong”. This included Cuba, Myanmar, Laos, Cambodia, Burundi, Indonesia, Vietnam, Bahrain, Sudan, Algeria, Nigeria, Morocco and others. “Hong Kong’s autonomy is important, but Hong Kong is part of China and the “One Country” is the redline”, CGTN reported.

According to Hong Kong’s pro-Beijing leader Carrie Lam, “For those foreign governments or politicians raising objections to the legislation, one could only lament the double standards they are adopting. All those countries which have pointed fingers at China have their national security legislation in place. We could think of no valid reason why China alone should be inhibited from enacting national security legislation to protect every corner of its territory and all of its nationals.”

In response to Canada’s decision to suspend its extradition treaty with Hong Kong, Chinese embassy in Canada spokesperson said that some Western countries including Canada have been meddling in Hong Kong affairs under the pretext of human rights, seriously violating international law and basic norms of international relations, and fully exposing their double standards on the issue of national security and real intention to flagrantly interfere in other countries’ internal affairs.