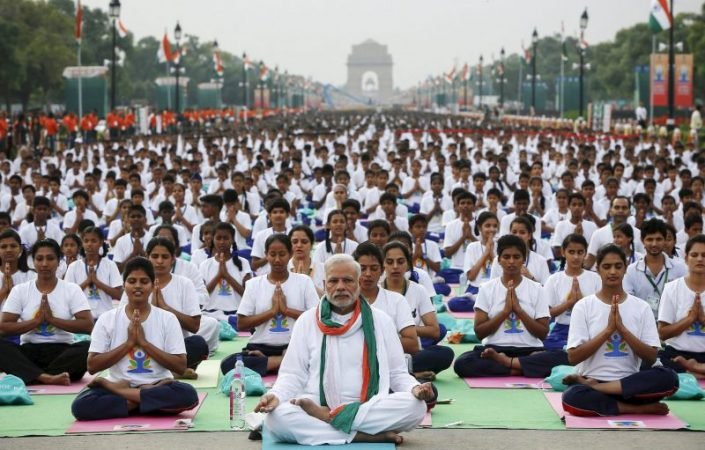 Soft Power, in international politics, illustrates the use of persuasion and positive attraction to achieve foreign policy objectives. Joseph Nye, American Political Scientist, in his book, ‘Bound to Lead: The Changing Nature of American Power’ wrote, “when one country gets other countries to want what it wants might be called co-option or soft power in contrast with the hard or command the power of ordering others to do what it wants.”

India is the home of the largest number of impoverished people; qualifies as the world’s largest democracy. For some, its rich culture stands in total retaliation against other revisionist and authoritarian powers that evokes the image of soft power for India. Whether it is Linguistics, Heritage, Cuisine, Ayurveda or Bollywood- Indian shibboleths and belief in ‘Vasudhaiva Kutumbakam’ benumb even the most rational minds.

The remark holds special significance since Prime Minister Narendra Modi took over the country’s throne. The Bharatiya Janata Party, more than any other political party, invests into resources to build India’s soft power, even developed a soft power measurement matrix. The efforts include a vast network of religious and social organisations, all of which advocate pride in the homeland. Nevertheless, PM Modi’s diplomacy is not confined to organisations solely. He, unlike predecessors, makes a regular visit to the Indian diaspora settled abroad. Reports by the BBC claim that during his first official visit to New York in 2014, he received a “superstar welcome”. Likewise, in 2016, the Indian PM inaugurated Pravasi Bharatiya Kendra in New Delhi with, “Let us view our diaspora not in Sankhya(number) but as Shakti(strength).” The message indeed speaks a lot about the unsaid. The leader’s interaction with the Indian diaspora has turned out to be so fruitful that many have started visiting India ‘to do their part to promote India’s interests even while residing out of India.’

There is perhaps, much more to the story. It is a well-known fact that the PM doesn’t just confine to New Delhi; prefers holding talks at different cities of India where he can showcase India’s soft power assets to the foreign leaders. In September 2014, for instance, PM Modi invited Xi Jinping, the Chinese President to Ahmedabad for bilateral talks. What came as a gift of technology was to evidence the Chinese President sitting barefoot and spinning charkha at the Sabarmati Ashram. Another famous incidence is that of Japanese Prime Minister, Shinzo Abe’s arrival to the religious city of Banaras. A report by the Hindustan Times states that Indian PM Modi and Japan’s Abe watched the evening rites of Aarati while sitting on a boat at the river Ganges that left the Japanese PM mesmerised.

One of the major policy planks of PM Modi to raise India has been publicised much under the ‘Make in India’ initiative. The program encompasses three major components: a) spark confidence in India’s capabilities amongst foreign partners b) facilitate a framework that provides diversified technical information c) connect with the local and global audience via social media. During his visit to Hannover Trade Fair in Germany, a famous Indian daily, the Hindustan Times observed, “From billboards to trams and buses, the lion was everywhere as 400 Indian companies are among 6,500 exhibitors at the fair.”

India’s unique soft power, de facto is increasingly visible around the world amidst the global pandemic COVID-19. The country’s soft power outreach is quite evident in terms of how the Western hegemonic powers the U.S.A, the U.K. that once questioned the reliability of ‘Sakahari Bhojan’ (Vegetarian Food), ‘Namaste’ (Greetings), and washing hands frequently have landed into the realization that Hinduism is not merely a religion but a way of life. That said, Yoga remains at the top-notch. PM Narendra Modi describes Yoga as “an invaluable gift of India’s ancient tradition.” What is more exciting is to come across testimonies like Tijjani Muhammad-Bande, President of United Nations General Assembly who confirm the physical and mental benefits of yoga amid the pandemic. He says, “Global health is a long term objective that requires close international cooperation and exchange of best practices. Health no longer only implies the condition of not being sick. It’s also about being actively well.”

Sceptics question India’s soft power on the parameters of Soft Power 30 report where India has no mention. They also question as to how the Indian PM can leave an imprint until China exists? I would herewith, like to mention about the International Yoga Day that gained prominence on 21st June 2014 just after the PM took his oath in May. Secondly, I do agree that India has not fared well-enough like China; it would be unfair to say that India has failed completely. Had it been the case, Bollywood movies would not have done so well abroad including China. The Box Office collection of ‘Three Idiots’ and ‘Dangal’ are two clear successes on this front.

Ted Piccone, senior fellow in Security and Strategy at Brookings coined, “A review of Modi’s external affairs agenda during his first year in office tells us many things: his vision for making India work again, seizing the initiative in South Asia and the broader Asian theatre, and proclaiming India as an inevitable success story worth betting on … But one also takes away from Modi’s first year in office a deeply felt spiritual and philosophical worldview that promotes India’s civilizational and cultural characteristics as unique contributions to the world. Modi speaks of India’s vibrant democracy, its “unity in diversity” ethos, not only as of the indispensable ingredient for governing its remarkably complex society but as the necessary path toward greater peace and coexistence in the world, a world that would allow his country to reach sustainable levels of development and prosperity.”

PM Modi’s government has aggressively promoted India’s modernity and tradition worldwide. The boldest observation is, ‘India under Modi has not shied from promoting India’s ancient civilizations; showcased newly gained advantages in human resources as well as the economy.’ The question that even then India struggles to be a big power, with a significant percentage of the population below the poverty line, persists as an unsolved mystery!