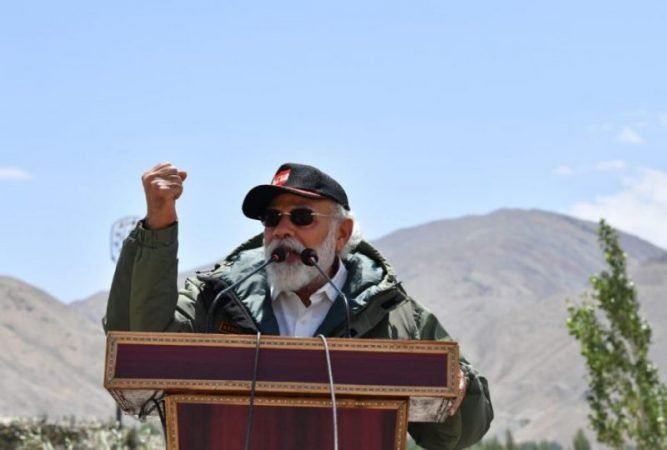 “I pay tribute to the soldiers who lost their lives in Galwan Valley, from Leh, Ladakh to Kargil, Siachen and to Galwan Valley, everyone is a witness to the valour of Galwan soldiers.”

The Indian Prime Minister, Narendra Modi visited Nimo, located 35 kilometres from Leh accompanied by the Indian Chief of Defence Staff (CDS) General Bipin Rawat and Army Chief General Manoj Mukund Naravane. During his visit on Friday, he interacted with Army personnel, Air Force, and the Indo-Tibetan Border Police. He was greeted by the chants of ‘Vande Mataram’ and ‘Bharat Mata Ki Jai’ by the soldiers, for his attempt at assessing the situation near the Line of Actual Control and commending the valour of the soldiers in the wake of skirmishes between the two dominant South Asian powers. He resonated with the sacrifices made by the soldiers in the recent happenings. The Union Defence Minister Rajnath Singh thanked PM Modi, stating that his visit to Ladakh boosted the spirits of the army soldiers deployed in the frontline.

Chinese Foreign Ministry Spokesperson Zhao Lijian stated that India should avoid strategic misjudgment on China, and the two nations should strive to maintain peace and tranquillity in the shared border and not compromise on bilateral ties. 20 Indian Army personnel lost their lives earlier last month in the Galwan Valley clash, a first in 45 years. Ji Rong, the Spokesperson of the Chinese Embassy in India highlighted that China has demarcated its boundary with 12 of its 14 neighbouring countries, including India, through the means of peaceful negotiations and diplomatic cooperation. The ‘expansionist’ labels were to be dismissed as it leads to an escalation of tensions and fabrication of border disputes, the tweet added.

Chinese Foreign Ministry Spokesperson Zhao Lijian commented that “India and China are in communication and negotiations on lowering the temperatures through military and diplomatic channels. No party should engage in any action that may escalate the situation at this point.” in response to PM Modi’s visit to Ladakh. Satoshi Suzuki, the Japanese Ambassador to India applauded India’s policy to at solving matters using peaceful resolutions and dialogues. He added that Japan opposes any unilateral attempts to change the status quo.

Apart from comments on PM Modi’s visit, Beijing stated that they shall take necessary measures to uphold the legitimate rights of Chinese businesses in India, and secondary blocks to bilateral cooperation violate the rules of the World Trade Organization and in turn harm Indian interests. This was in the wake of the ban on 59 Chinese applications in India with changing soft-power dynamics on the grounds of the apps being “prejudicial to the sovereignty of India, defence of India, the security of the state and public order”.