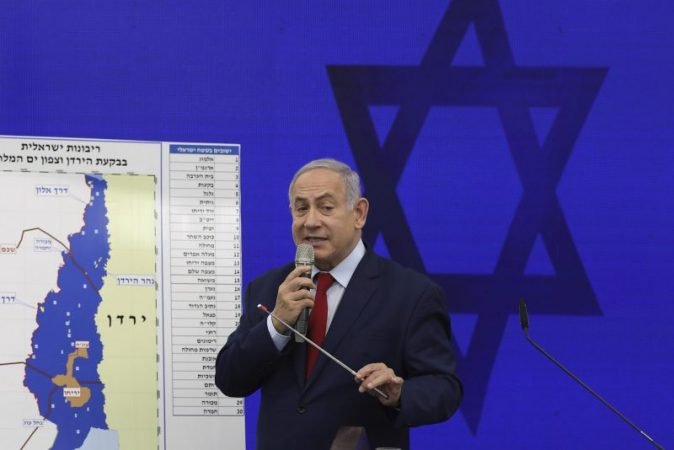 Israeli Prime Minister Benjamin Netanyahu has been intent on moving forward with the proposal of annexing one-third of the already illegally occupied West Bank, including parts of the strategic Jordan Valley. The proposed program comes in the wake of United States President Donald Trump’s controversial Middle East plan that he revealed in January this year.

According to United States officials, high-level White House discussions has been taking place the past few days concerning whether the Israeli Prime Minister should be given a go-ahead for his plan to annex settlements in the occupied West Bank as the target date of the Prime Minister, July 1st, approaches fast.

Under the international law, West Bank is understood as an occupied territory, which makes all the Jewish settlements there in the region, as well as the planned annexation, illegal. Michael Lynk, the UN independent expert on human rights in the Palestinian territories has stated, “International law is very clear: annexation and territorial conquest are forbidden by the Charter of the United Nations.” However, the United States has held a contrasting stance as United States Secretary of State Mike Pompeo said recently, “Decisions about Israelis extending sovereignty to those places are decisions for the Israelis to make.”

These recent developments this year has been a source of widespread international outcry as many have condemned the proposed series of actions. Saudi Arabia, Jordan, Egypt, the United Arab Emirates and Bahrain have made their stance against it clear, which might explain United States’ current hesitation in giving the green light to Israel to proceed with the plan.

Jordan’s King Abdullah has declared it “unacceptable” and warned of a “massive conflict” in the region. In addition, Jordanian officials have threatened to reconsider their peace treaty with Israel or their security cooperation agreements. So far, Jordan seems to be the most outspoken in its opposition to the annexation plans. There are concerns that Jordan may respond by suspending a $10 billion gas deal that currently lets Israeli natural gas flow into Jordanian power plants for electricity generation.

Ahmed Aboul Ghet, head of the 22-member Arab League, has stated, “The possible move by the Israeli government to annex parts of the occupied Palestinian territory would constitute if implemented, a serious threat to regional stability.”

Numerous European nations such as Germany have advised against the annexation and threatened possible sanctions against Israel. “Annexation would not be compatible with international law. Therefore, we continue to support a negotiated, consensual solution,” Heiko Maas, German foreign minister said at a press conference in Jerusalem. “We will need new creative impulses for the restart of talks.” Former United Kingdom prime minister, Tony Blair reiterated that Israel’s current plan “will create a significant source of tension between the European Union and the State of Israel, even amongst those states that are traditionally very supportive of Israel.”

One of the most vocal actors has been the United Nations as they have warned against the planned annexation since its conception. 47 experts appointed by the UN Human Rights Council have concluded, “The annexation of occupied territory is a serious violation of the Charter of the United Nations and the Geneva Conventions, and contrary to the fundamental rule affirmed many times by the United Nations Security Council and General Assembly that the acquisition of territory by war or force is inadmissible.” They added that the Israeli occupation was already a “source of profound human rights violations against the Palestinian people,” and that they “would only intensify after annexation.” They further said, “Israel has recently promised that it will maintain permanent security control between the Mediterranean and the Jordan River. Thus, the morning after annexation would be the crystallisation of an already unjust reality: two peoples living in the same space, ruled by the same state, but with profoundly unequal rights. This is a vision of a 21st Century apartheid.”

A United Nations report on the Middle East Peace Process has stated, “We can state unequivocally that any move by Israel to annex parts of the occupied West Bank or any Palestinian withdrawal from bilateral agreements would dramatically shift local dynamics and most likely trigger conflict and instability in the occupied West Bank and Gaza Strip.” “Threats of unilateral action by both parties risk destabilizing the situation and upending progress attained after years of negotiations and efforts to build Palestinian institutions,” it added.

According to the United Nations report, “Palestinian President Abbas announced that the Palestinian leadership considered itself “absolved of all the agreements and understandings” with the United States and Israeli governments, considering Israeli plans for annexation. President Abbas also called on Israel to assume its obligations as the occupying power.”

The Palestinian leadership has reacted strongly against the ongoing proceedings. Prime Minister of the Palestinian Authority, Mohammad Shtayyeh has called Israel’s intentions for annexation an “existential threat” and said Palestinians will respond with their own measures. Similarly, the Palestinian foreign minister has warned that any annexation would be a “crime” and lead to immediate and tangible repercussions. The Gaza-based Hamas government as well made themselves heard as they called for unity among Palestinians and popular acts of resistance against Israeli plans to annex parts of the occupied West Bank.

Israeli Prime Minister Netanyahu has long argued the case for declaring sovereignty over all Jewish settlements established in the West Bank, including the Jordan Valley. He had restated his intentions to do so the last three election campaigns and finally saw his opportunity to materialize his goals under the Trump administration, especially in the light of Trump’s Peace to Prosperity plan which was unveiled in January.

While Israel welcomed Washington’s plan with open arms, Palestinian leaders were quick to reject it and highlight President Trump’s inclination and bias towards Israel.

The United States-Israel duo and their plan of action has received worldwide criticism. Many have voiced their concern for the consequences for the region and the plight of the Palestinians. Some believe the situation in the West Bank will come to mirror that of Apartheid in South Africa. Head of the Center for Middle East Studies at the University of Oklahoma, Joshua Landis told the Times that “even if there is no large outburst of protest or violence in the Arab World due to the announcement of annexation, the injustice and continued occupation that it will inflict on Palestinians will surely take its toll.” He further stated, “The region will remain in a state of turmoil and enmity against the Jewish state and America for decades to come as the Arab World watches the drip-drip of ongoing Palestinian ruination.”