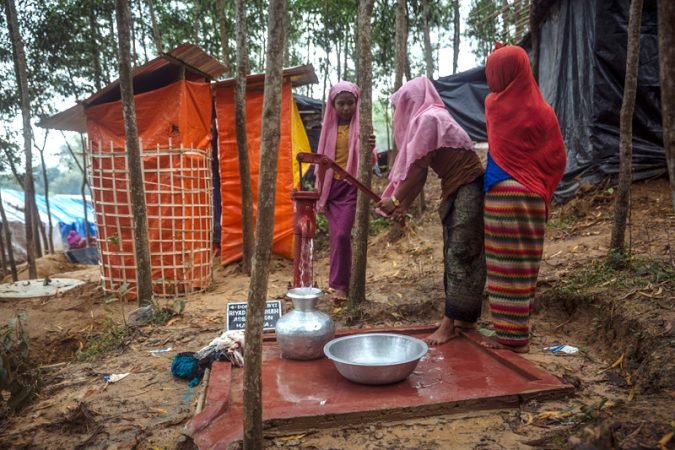 Millions of people living in different countries still lack basic availability of water and sanitation even today which is an intensifying alarm for the global community to work on this goal with more responsiveness. Because the situations might turn out to be more challenging for the institutions to bridge the gap due to this pandemic.

Globally, the proportion of the population using safely managed drinking water services increased from 61 to 71 per cent between 2000 and 2015 and remained unchanged in 2017. An additional 19 per cent of the global population used basic drinking water services. This means that 785 million people still lacked even a basic drinking water service. These figures depict both progress as well as point out to an immediate solution for those 785 million people for whom the resources are still inaccessible. The global population using safely managed sanitation services increased from 28 per cent in 2000 to 43 per cent in 2015 and to 45 per cent in 2017, with the greatest increases occurring in Latin America and the Caribbean, sub-Saharan Africa and East and South-East Asia. Between 2000 and 2017, the proportion lacking even a basic sanitation service decreased from 44 to 27 per cent, yet 701 million people still practised open defecation in 2017.

In 2016, one-third of all primary schools lacked basic drinking water, sanitation and hygiene services, affecting the education of millions of schoolchildren, but particularly girls managing menstruation, and one in four health-care facilities worldwide lacked basic water services, affecting more than 2 billion people. Data suggests that achieving universal access to even basic sanitation service by 2030 would require doubling the current annual rate of progress.

Bangladesh is one of the densely populated countries which is more vulnerable to basic water, sanitation and hygiene services. Majority of the population of Bangladesh lives in rural areas. Another challenge to Water supply coverage at Bangladesh is the contamination of water due to high arsenic level that is defined dangerous by the government and does not meet the safety standards. According to the WHO, the levels of arsenic have contributed to the largest mass poisoning in history, affecting an estimated 30-35 million people in Bangladesh. Exposure to arsenic can cause cancer and severely damage many integral systems in the human body. Arsenic has been shown to be the cause of death for Bangladesh.

This would lead to waterborne diseases which would ultimately affect the health and good well-being. Bangladesh has made significant progress in reducing open defecation, from 34 percent in 1990 to just one percent of the national population in 2015. However, the current rate of improved sanitation is 61 percent, growing at only 1.1 percent annually (As per the world Bank Report). The Government has adopted various policies to remedy these challenges like National Policies for Safe Water Supply and Sanitation, National Water Management Plan, the National Policy for Arsenic Mitigation and the National Sanitation Strategy of 2005. Though Bangladesh has achieved remarkable achievement in reducing open defecation but has also brought faecal sludge management a new challenge for the country. In Bangladesh, about 87 % of households have access to water resources, but only 10% have access to the piped water supply.

The Municipal Water Supply and Sanitation Project will help about 600,000 people living in small towns get safe water through piped water supply systems. In the selected 30 municipalities that currently do not have piped water systems, the project will install water infrastructures, including water treatment facility, water storage, transmission and distribution pipe network, house connections including meters, and others. The project will also help the participating municipalities improve sanitation and drainage systems. This will include investments in septage management, public toilets, septage disposal, and critical drainage infrastructure. The project will also provide equipment and training to cleaning workers for faecal sludge management.

“With Bangladesh’s rapid urbanization, both small towns and big cities need to improve their infrastructures, including water and sanitation systems, to cater to the growing population,” said Mercy Tembon, World Bank Country Director for Bangladesh and Bhutan. “Water and sanitation systems are an integral part of a modern city. This project will contribute to the government’s goal of expanding piped water coverage in municipal areas.”

Bangladesh is vulnerable to environmental disasters due to combined effects of climate change, population growth and urban migration. There are frequent extreme events like flooding and cyclones that destroy sanitation facilities, cause toilets to overflow, and contaminate drinking water sources. Knowledge about the menstrual hygiene among girls is a matter of concern along with their drop-outs from schools due to lack of separate girl toilets denying their right to privacy and dignity when they start menstruating. These issues widen the gap of gender equality and makes more problematic to achieve the Sustainable Development Goal 5 Gender Equality. UNICEF is working to provide adequate sanitation facilities to menstruating girls and studies have shown that attendance of girls increased by 10 percentage points when provided with gender-segregated toilets.