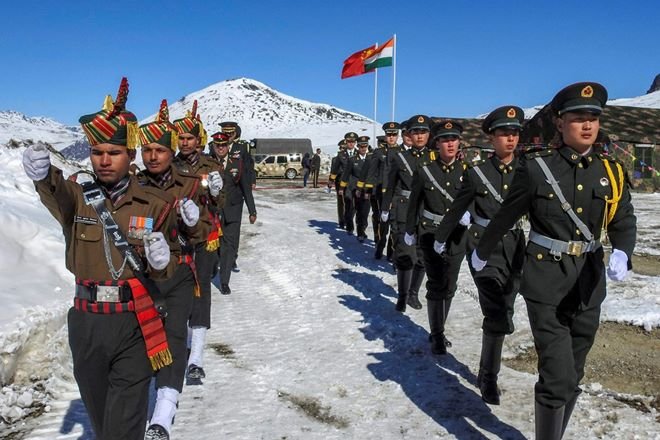 Once again India and china border scuffle have gathered the attention of domestic as well as international media. The foreign ministry of both the countries have confirmed that violent scuffle at Galwan Valley near LAC led to casualty on both sides with 20 soldiers dying in Indian Army and no exact figure came from the Chinese side.  There has been incessant blame game of transgression along an imagined Line of Actual Control (LAC) by both the sides. But the obvious conflict between satellite images and official statements have created ambiguity regarding the ground reality. Over a period of nearly a month and a half, there has been a number of editorials interpreting the situation through a historical lens. Even experts are digging the possible connection with recent revocation of the special status of Jammu and Kashmir.

China is a great power which is perhaps the only nation that has the capacity as well as leverage to challenge the USA.  China has so far accelerated, incredibly, its clout over its surrounding and beyond (sometimes often with force). As realists point out, that a great power must behave like a great power, therefore China will inevitably try to dominate the region and beyond (Mearsheimer say so).  It is in this context that this article examines the current standoff between India and China.

First of all, we must understand that China is no rough/ rogue or ambiguous state. It has very vividly, though implicitly, resonated her global power ambition. Whether it’s grandeur Belt and Road Initiative (BRI) or South China Sea adventurism (claims even after PCA ruling) or re-imagination of an ideological characterization of socialism for others to follow or recent boundary pushover at Sino-India Border. For instance, China did not hesitate to drag revocation of Article 370 to UNSC or their outride singular opposition to India’s NSG membership or they went ahead with CPEC even after India’s strongest opposition to the project on the pretext of the sovereignty issue.

China, under Xi Jinping, is trying to re-orient regional strategic and economic landscape with China as a central stakeholder. By far, many countries including South East Asian states, small South Asian states like Nepal, Bangladesh, Sri Lanka or other island states have accepted or have been made to accept the Chinese modus operandi. Unlike others in the region, India is perhaps the only country that has been thwarting Chinese high headedness conduct in the region. Whether it’s 2017 Doklam crisis where China chickened or India’s vocal and resolute opposition to Chinese BRI where China even proposed to change the nomenclature (CPEC) if India joins, India has given Chinese a considerable embarrassment, given its military and economic superiority and ostentatious power projection. Current contestation at Galwan valley in Ladakh region and Naku La in Sikkim has been mutually agreed settled LAC region but this time China seems to have a differing perception on the pretext of construction activities on the Indian side. As happened in 1962, the South China Sea issue, 2017 and now, China has tried, quite often, to alter the status quo unilaterally. India had been proposing an agreement to settle LAC but China view these border issues as a kind of leverage over India to keep it off guard as and when the propitious moment strikes.

Secondly, One of the characteristic features of great power is embedded in smart diplomatic adaptability and agility. Chinese have conveyed and pursued their message quite explicitly. Vis-à-vis India, they have demarcated their contentious issues with that of issues on which compromises are possible. They are quite adamant and vocal with their opposition to India’s NSG Membership or upping the ante on Indian domestic legislations (revocation of Article 370) While at the same time, even after India’s accusation of China to have violated the sovereignty of India, they have, time and again, reiterated that doors of BRI are always open for India. While talking about smart diplomacy, not to forget a recent development wherein Chinese annual government work report said ‘we will focus on quality in the joint pursuit of BRI’ amid growing concern over so-called debt trap and COVID-19. Recently in an apparent move, Chinese issued demarches to India and others explaining their controversial national security law on Hong Kong. All these show that China, like a statesman power (not an endorsement of all of their conduct), has kept its engagement and disassociation, a context-specific phenomenon.

Thirdly, learning from the past experience of 2017 Doklam crisis wherein China launched a diplomatic and media offensive seeking India’s pushback from Chinese claim over Doklam, this time around China has maintained a low profile so much so that Chinese Foreign Minister’s Wang Yi, in his annual conference on the sidelines of Communist Party Congress, did not even mention about ensuing standoff against India at the peak of this incident. Despite an inconclusive military (Lt. Gen.) level talks on 6th June, Chinese and India ministry press briefing, alike, have reiterated their faith on diplomatic and military level engagement to dissipate the crisis.

Another component of great power projection is psychological warfare which is conducted from a newsroom and conducted on the minds of the common populace. In China, conduct and orientation of this type of warfare are at the forefront because of complete control over Chinese media by her leadership and the conduct is global at multiple levels. As reported in Financial Express, the current intrusion was deliberately planned at the highest level and endorsed by state-run media narrative. In order to instil fear among Indians and to boost PLA, the photos of grievously injured Indian soldiers lying on the ground, flashed on Chinese media. As highlighted in several media that Chinese broke six treaties this time around (including 1993 peace and tranquillity along with LAC agreement, 2005 protocol on modalities of confidence-building measures in the military field along the LAC etc) and Chinese officials, paradoxically, hope to normalise the situation through existing mechanism-protocols. With the increase in mass media technological proliferation, psychological warfare becomes an easy assault especially under arguably authoritarian Chinese regime and adds another dimension to global power politics as we saw during US-China diplomatic tension over WSJ reporting.

Hence the standoff, currently we are in midst of, has its genesis in Chinese perceived psychic superiority through which it intends to browbeat any potential challenge in its periphery. Particularly when it comes to India, China has been relatively indifferent to any economic concerns (owing to their huge economic surplus) but quite vocal at sensitive issues like Tibetan pacifism and warn India of possible stained ties whenever any India leader visit the disputed region like Arunachal Pradesh (as called by Chinese). Adding to this is the Chinese psychological warfare armed by state-run Global Times that sometimes ensures legitimacy by targeting the perception of a domestic and foreign audience.

Thorough understanding of Chinese global power project and barging into their psychological pattern of conduct by studying Chinese mouthpiece, ‘Global Times’, propaganda on the various issue would enable Indian establishment to spot its response on critical subjects and build its enduring strategy on future Chinese attempt towards altering the status quo.