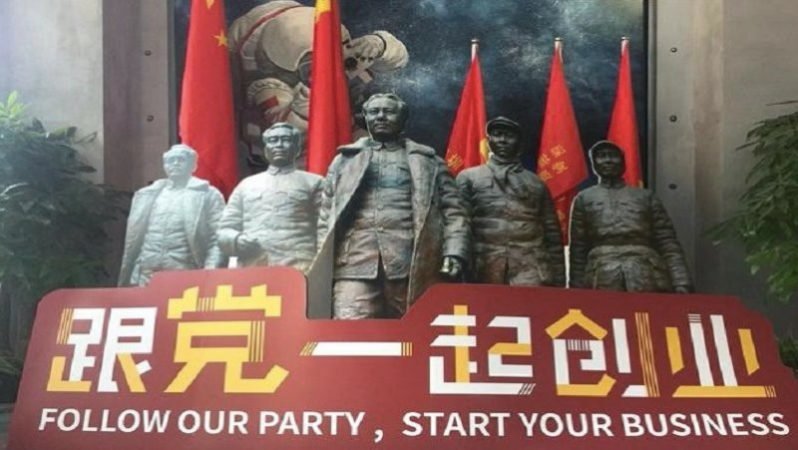 The most distinctive aspect of China’s “socialist market economy” is that it relies on a precisely set and regularly reviewed strategy. Defined in its plans (the Five Year plans, alongside other longer-term objectives, the most famous of which being the Made in China 2025 plan published in 2015), deployment of this strategy is spearheaded by the country’s “economic champions”, most of which being state-owned enterprises (SOEs) under the direct control of the Central State-owned Assets Supervision and Administration Commission (SASAC), reporting directly to China’s State Council.

Corporate appointments as a strategy tool

Based on a survey of the profiles of 459 top executives at 74 firms controlled by Central SASAC, this report identifies from the onset that approximately only one in two (54%) of these decision-makers spent their entire career at the same firm. This ratio even drops to 33% when only C-level executives (chairmen and general managers) are considered.

From there on, the report analyses the profiles of the other 46% of executives – and 67% of C-level ones — through their career history in relation to the “three circles” in which China’s SOEs operate.

The first circle is made up of other Central SASAC-controlled firms operating in the same field of activity as the present employer. 24% of all executives surveyed, and 35% of C-level ones, have been transferred from within this first circle.

This allows for greater coordination between firms that are officially competitors but are in fact engaged in strategic coordination of industrial or related sectors.

The second circle is made up of other Central SASAC-controlled firms operating in other business sectors than that of the present employer.

The 15% of executives, and 20% of the C-level population, who have been transferred from that circle mainly allow for cooperation between “champions” in different industry sectors, thus ensuring greater coherence between end-users and providers of technologies.

Third circle – executives on a mission

The third circle in which SOEs operate, from which 7% of decision-makers and 12% of C-level executives originate, is made up of Central and Regional Government bodies.

Executives transferred from that particular circle can be on two kinds of mission:

While it reveals that two-thirds of Central SOEs’ highest executives originate from one of these three circles, the report also focuses on the strong attention given to coordination, at different levels, of the economic strategy followed by these firms.

Indeed, the report shows that, among top deciders (Communist Party of China – CPC Secretary, governor and vice-governors – or administrative equivalent) in the local governments of China’s 31 provinces (Hong Kong and Macau Special Administrative Regions excluded), 23 of those (dispatched to 16 different provinces) had decision-making experience in Central SASAC-controlled firms prior to being transferred to their current government position.

Although this trend is nothing new, it has certainly grown stronger over the past few years, although the appointment within regional governments of former executives of regionally controlled firms, which tended to create conflicts with national strategy, has receded.

As control over regional financial institutions has become an increasingly important question for Beijing, since 2016, no less than 15 decision-makers from the banking sector have been transferred to top positions in as many regional governments, with four of them having returned to the financial industry after their mission ended (as of May 2020).

Behind the ever-changing landscape of China’s political and corporate power lies the Central Organization Department of the CPC. Sometimes referred to as the most powerful Human Resources department in the World, it controls a corporate appointment policy that reinforces the shaping up of “national champions”, and ultimately aims at the deployment of China’s strategy for economic power.

(1) To receive a complimentary copy of this report, please send a request to infos@dca-chine-analyse.com.

This article was originally published on Asia Power Watch on May 28th, 2020

Jean-François Dufour is the Chief Analyst at DCA Chine Analyse, an intelligence consultancy dedicated to monitoring the Chinese industry and its environment. An Editor of the specialized newsletter "The China Industrial Monitor", he is also the author of several books on China’s economy, including "China Corp. 2025 – Dans les coulisses du capitalisme à la chinoise" (Maxima, Paris, 2019) and "Made by China – Les secrets d’une conquête industrielle" (Dunod, Paris, 2012, and Springer Italia, Milano, 2013).