China ‘preparing for an Armed Combat’ 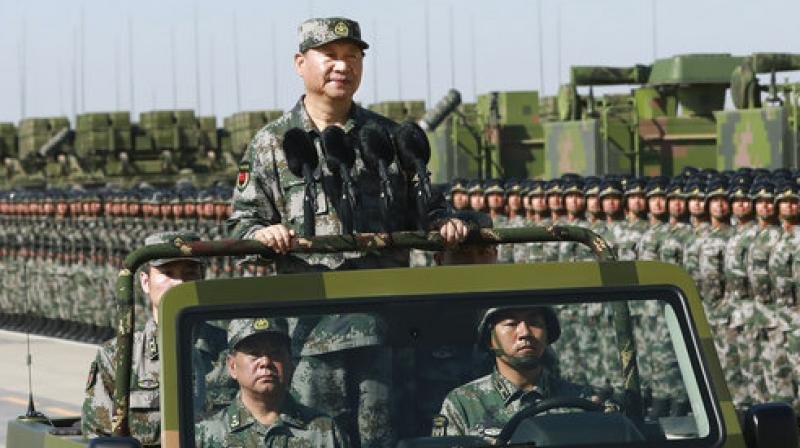 Chinese President Xi Jinping has asked the People’s Liberation Army to step up their war preparedness. In a meeting with the Chinese military leadership on the sidelines of the National People’s Congress, the Chinese parliament, President Xi was quoted as saying, “It is necessary to step up preparations for armed combat, to flexibly carry out actual combat military training, and to improve our military’s ability to perform military missions.”

This comes as China announced a 6.6% annual hike in its defence budget, with their defence spokesperson Mr Wu Qian saying that China faced heightened security threats, particularly from Taiwan. He said, “The Democratic Progressive Party authorities in Taipei are relying on external forces and going further down the path of separatism. The situation against separatism is getting grimmer.”

Such comments come in the midst of all-round aggression by Beijing. China has clashed with India at the border, the South China Sea has seen Chinese muscle-flexing, Taiwan has been harassed, Australia has been bullied, and, in the latest move, Hong Kong is being stripped of its autonomy with a new national security law. This has led experts to ponder whether such aggressive posturing can now push China into an armed confrontation.

One should be worried regarding India and China, Dr Sumit Ganguly, a professor of political science at Indiana University and Dr Manjeet S Pardesi, Senior Lecturer at the Victoria University of Wellington, write for Foreign Policy. They write that as it has been decades since the last bullet was fired, an understanding has developed that it will not escalate to that scale now as well, but one may be cautious with such an understanding.

The 1988 India-China compromise, Dr Ganguly and Dr Pardesi write, was reached when India and China were more or less at par in power dynamics but a disparity has come since then.

They write, “At $13.6 trillion in 2018, China’s GDP is now more than five times India’s $2.7 trillion. Similarly, China spent $261.1 billion on defence expenditure in 2019, almost four times India’s total of $71.1 billion. A new economic dynamic means that the underlying bedrock of the [Rajiv] Gandhi-Deng bargain—of similar means and goals—is fizzling out.”

Aggressive posturing with muscle-flexing everywhere and now a call for war preparedness in the midst of a pandemic is not incidental. About the move in Hong Kong, CNN’s James Griffiths writes, “Beijing may be counting on the fact that the coronavirus pandemic has weakened the ability and determination of the international community to pressure it over Hong Kong — the UK in particular, newly outside of the European Union, is dependent on increased trade with China to boost its flagging economy.”

Similarly, Beijing may corner Taiwan as well in the pandemic. Mr Bertil Lintner suggests the time may be ripe for China to make a move on Taiwan. He writes for Asia Times, “Pandemic has left a US security vacuum around the self-governing island China has oft-vowed to ‘reincorporate’ with the mainland. China watchers believe that Chinese President Xi Jinping has set an undeclared deadline of this year for a final decision on whether to invade Taiwan, but opinions vary as to whether that is truly his intent.”

Experts have also raised fears of a conflict in the South China Sea in the pandemic. China and the US have also engaged in tit-for-tat actions in the South China Sea, sailing their warships one after the other through the troubled waters between China and Taiwan. About Chinese posturing in the pandemic, Carl Schuster, a retired US Navy captain and former Director of Operations at the US Pacific Command’s Joint Intelligence Center, told CNN, “I think China is exploiting the US Navy’s coronavirus challenges to improve its position in the South China Sea by giving the appearance it can and will operate there at will while the US is hamstrung.”

However, it has also been commented that, rather than seeking confrontation and assertion, Chinese actions may be driven by its sense of insecurity. Mr Yoram Evron, a China expert at the University of Haifa, told The South China Morning Post, “China doesn’t feel safe enough – externally but maybe also internally – to slow down its military build-up, no matter what the economic circumstances are. But at the same time, it is still constrained by economic developments and it probably doesn’t want to project an aggressive image.”