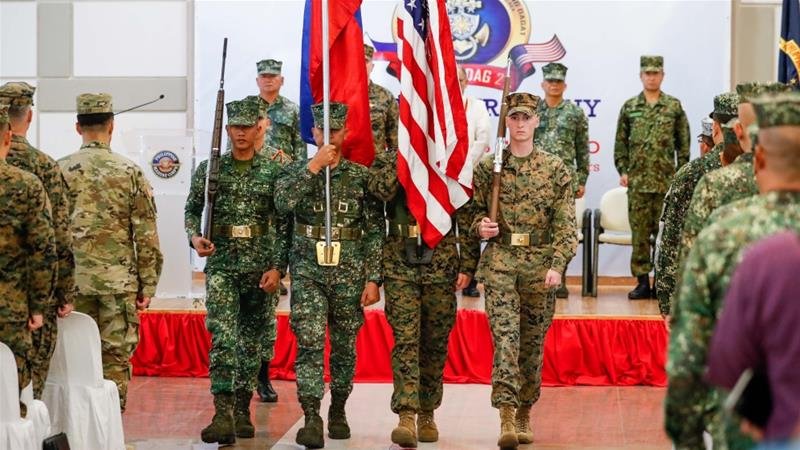 The president of the Philippines officially filed for the revocation of the Visiting Forces Agreement (VFA), which provides U.S. troops with a legal basis to be available for military cooperation activities in the region after he had threatened to end the 21-year-old arrangement for months. The decision to end the pact follows anger at the reported decision by Washington last month to withdraw Philippine Sen. Ronald Dela Rosa’s US visa. The former National Police Chief, Dela Rosa, implemented the ruthless war on drugs initiated by Duterte, which murdered thousands and was harshly condemned by worldwide human rights watchdogs.

The extreme anti-Americanism of Duterte, however, diverges dramatically from popular sentiment. Polls have shown in recent years that Filipinos support the United States much more than the Americans did. Other surveys indicate that most Filipinos are distrustful of China’s regional competition, and have strong faith in the US. American forces in the Philippines are provided with essential legal cover by VFA. Without the privileged protection provided by the VFA from local criminal enforcement, customs, and immigration officials, the U.S. military will be disrupted from conducting its regular schedule of about 300 strategic joint drills, rotational troop movements, dock visits, as well as other operational obligations.

The revocation of the VFA may also negatively impact the continued development of military bases and the prepositioning of combat articles in the Philippines, approved under the 2014 Enhanced Defense Cooperation Agreement (EDCA) implementation agreement of the VFA. Similar to the Status of Forces Agreements (SOFA) with Japan and South Korea, this legal status makes for a secure, effective, and friendly partnership between the Philippines and the United States, as well as providing for the swift enforcement of obligations under the Mutual Defense Treaty. In legal theory, however, the decision by Duterte to abort the VFA should minimally affect bilateral cooperation.

The 2016 ruling of the supreme court of the Philippines on Saguisag vs. Executive Secretary, along with the viewpoints of the Philippine Department of Justice (DOJ) in 2008 and 2015, covering all various types of short-term or transitory visits by U.S. military personnel already approved under the EDCA, which envisages a legitimate policy path for most established forms of bilateral security cooperation — if not preferential. Such legal precedents would even effectively protect functional stopovers for the Indo-Pacific free navigation missions to the US.  A similar regulatory precedent also exists for interim granting of preferential entry to a foreign military. For instance, the Philippine Department of Foreign Affairs (DFA) issued a letter to the U.S. in 1993 after the expiry of the MBA of 1947 “granting privileges and immunities to U.S. military personnel … accorded to the Embassy’s administrative and technical staff under the Vienna Convention on Diplomatic Relations.”

Way Forward for the Alliance

During a visit to Manila last year, Secretary of State Mike Pompeo made it clear that any armed assault by China on Philippine military forces or public vessels in the contested West Philippine Sea / South China Sea (WPS / SCS) theatre will immediately activate Article 4 of the MDT. The complications of sustaining an alliance are by no way unique to the partnership between the US and the Philippines. The United States and Japan had to mitigate disagreements about structural problems, host nation protection, and cooperation at different stages during and after the Cold War. In recent years, U.S. ties with the European Union and NATO have worsened, to the extent that some claim that they are already “irreparably damaged.”

Trust, which is the necessary foundation of every alliance, is the main casualty in the VFA termination. The US government can aim to figure out a new deal with Duterte, but trust something that can take a very long time to establish and a mad dash to spoil. The Philippines is funding 1.1 percent of GDP on the military, half the level of ASEAN. Of which, around 30% of the Philippine defence budget funds operations, with the majority being allotted for salaries and bonuses. Not unexpected, the Philippines heavily relies on US aid for developing defence capabilities (e.g., through the Military Assistance System and Articles on Excess Defense).

The Philippines is not an economic superpower, unlike the other US allies such as South Korea and Japan. Manila is still the only U.S. alliance partner and WPS / SCS disputant to counter consistent threats to national stability, including a communist uprising in the Cold War period, ongoing militant extremism, and an Islamic secessionist rebellion in Mindanao. There has been a significant increase in challenges to Philippine interests in the South China Sea. In the contentious Spratlys, Beijing has developed and militarized seven artificial islands. It also has used these to push its maritime, naval, coast guard and paramilitary reach across the South China Sea, threatening Filipino fishermen, vessels, and resupplying operations to Philippine-held islets and reefs. Beijing has expanded the number of weapons stationed in disputed waters significantly and appears to act them against its neighbours in a reckless manner which undoubtedly leaves the status quo insecure.

China’s continuation of its unlawful assertions and militarization of contested areas in the South China Sea challenges long-standing US priorities in maritime sovereignty and Indo-Pacific peace. Successfully protecting this needs China’s neighbours, particularly the Philippines, to keep supporting the US staying in power and remain willing to challenge China’s contention for expansive claims in disputed islands. Other than China, trans-border militant organizations in the absence of US military assistance may also pose significant challenges to Philippine stability. Duterte and his supporters celebrated the revocation of the VFA as a step toward an “independent” foreign policy, the fact is that the Philippines is now increasingly exposed to growing competition from China in the South China Sea, ISIL agents in Mindanao, and climate change at a national level.

Niranjan Jose is a Research Intern at The Kootneeti. He is currently an undergraduate studying BBA LLB from National Law University Odisha (NLUO) and can be reached at 17bba031@nluo.ac.in