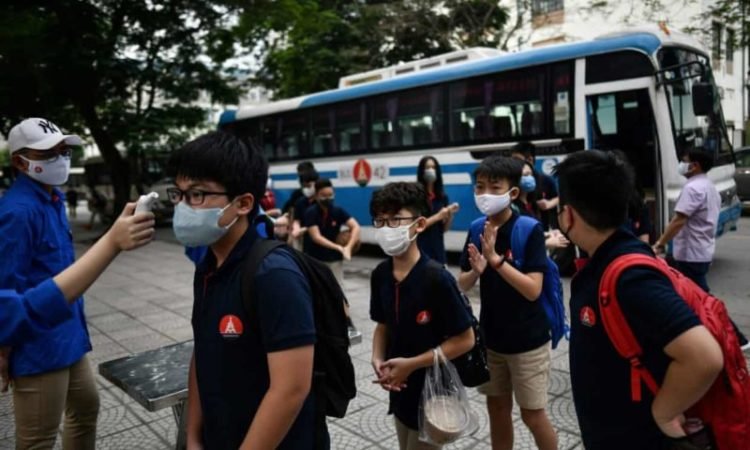 Children wearing face masks wait to be tested as they return to a school in Hanoi, Vietnam/ Image: Manan Vatsyayana/ AFP via Getty Images
PDF Button

Vietnam’s response to COVID-19 has been formidable, with reportedly zero deaths and less than three hundred cases of COVID-19 nationwide. With a country of nearly ninety-six million people, Vietnam has set an example today across the globe. Sharing border of about 1,400 km with China where the pandemic originated, Vietnam has been one of the first countries to confirm COVID-19 case outside that of China. Also, Vietnam’s economy is closely linked to China, which has impacted the economy quite severely too. With no cases reported locally for the past three consecutive weeks, Vietnam has started easing its nationwide lockdown after the unification day, making it one of the first countries to take this step. Vietnam has also started reopening its schools from earlier this week with precautions, like scanning of temperature at school gates to mandatory use of masks and sanitizers to minimize the outbreak.

With most of the countries crawling with a crippling effect due to COVID-19, worldwide number of affected people reaching to around 4 million, the response of Vietnam has been especially impressive. Vietnam is a lower-middle-income country, poorer than neighbours like Indonesia and the Philippines. Those countries are facing expanding outbreaks and do not seem to have gotten control over the domestic transmission. Vietnam has a modest budget for health care and broader public health measures and cannot test as many people as wealthier countries.

The past experience with SARS, which hit China, Hong Kong, and Southeast Asia hard in 2003, Hanoi learned from SARS that it had to react quickly to any disease outbreaks and take tough initial measures. (Vietnam was the first country to successfully contain SARS.) So, with COVID-19, the Vietnamese authorities have reacted immediately, decisively, and with a degree of severity that proved to be good judgment. The Prime Minister demanded, “anti-epidemic as anti-invasion”. He focussed on how Ministries, branches and localities must not be subjective and must ensure the life and health of the people and not let epidemics spread, and minimize deaths.

Vietnam focussed on a low budget strategy, with channelized tracing of COVID patients, mandatory quarantining, the decimation of information, and investing in public awareness. According to the World Health Organization, Vietnam spends 5.6 percent of its GDP on healthcare. A well-known fact is that to be able to conduct massive testing for Covid-19, one has to be extremely robust in terms of resources, particularly financial and technological. Eventually, Vietnam could not have opted for massive testing but rather controlled infected people and implemented contact tracing with possible infected ones. “Fighting the epidemic is like fighting against the enemy”[1] has been the slogan adopted by the country throughout. Unlike countries like South Korea, Singapore which invested in massive testing and epidemiological surveillance, Vietnam focussed on public communication, tracing the patients and utilising technology for awareness programs for citizens.

The Ministry of Health has been at the forefront for, and coordinate with the Government Office in, formulating and submitting to the Prime Minister for promulgation a directive on the prevention and control of COVID epidemics in the spirit of the participation of the political system, with a strict and regular working regime. It has been given the responsibility to inspect and take preventive measures, prepare financial resources, ensure a sufficient number of drugs and equipment in service of epidemic prevention and control. The Prime Minister also established a national-level steering agency for COVID prevention and control, headed by Deputy Prime Minister Vu Duc Dam. The Prime Minister also emphasized time and again about regular information, especially the proactive measures, not causing confusion and wavering for the people as well as advising people not to go to crowded places. The international gate, the main gate was fitted with a body temperature meter to control and check the outbreak and spreading. The Ministry of Health also publicized treatment facilities for people to know the impact in details.

The quick response and action started when the first case was reported on 23rd January, and eventually, Vietnam decided to go on lockdown phase-wise. Earlier in January, when China declared COVID-19 as a pandemic, Vietnam conducted meetings with its national healthcare officials and ministries and made them aware of the situation. This timely awareness later didn’t create panic or chaos, rather citizens were well prepared. Vietnam started closing down public places, schools and other areas by early February and stopped all kind of cross border transportation facilities. Vietnam implemented tough controls on travel and on people who were potentially infected, very early on in the crisis, as other Southeast Asian states dithered; it also was quick to put lockdowns into place. Since the middle of February, Hanoi has been quarantining anyone coming into the country for fourteen days, and it stopped Chinese tour groups as well as direct business travel to and from China. It eventually closed all international flights, after a new wave of infections from European arrivals to Vietnam.

Following effective tracing methods was key to their strategy from the very start, unlike many other countries. It has mobilized huge numbers of people to serve as tracers, making it possible to track down all or nearly all the contacts of infected people, and then to track down the contacts of those contacts, to ensure the virus did not spread. Vietnam enlisted the armed forces (as well as large numbers of civilians) which made it easier for Hanoi to do kind of public health surveillance. The government also set up mobile-phone apps. People could report symptoms via one of the apps, called NCOVI. Infected, quarantined and recovered patients were required to install apps like, Smart City, which informed residential district heads if patients move 20-to-30 metres away from quarantine areas or houses containing self-isolating cases. The apps have proved hugely effective, according to the health officials.

Government’s competent leadership, and reliance on public health experts to guide it, has been the key factor in Vietnam’s success so far, but the pandemic also has triggered a wave of impromptu domestic innovation. A Ho Chi Minh City-based businessperson invented rice “ATMs”[2] to distribute rice to those in need, during the pandemic, while minimizing physical contact. Local hospitals and other scientists have invented affordable rapid testing kits. These kits and protective gears have been now, exported to other countries, like Romania where there has been a shortage of healthcare apparatus. Several digital tools such as Bluezone, which is an open-source mobile app, have come up so that healthcare officials in Vietnam can easily locate and manage potential risks. There also has been an app made for people to enter symptoms and report to the nearest health centre.

Though in the past three months, the economy of Vietnam has been affected due to COVID-19 outbreak. Its GDP fell to 3.8 percent in the first quarter of 2020, as compared to 6.8 percent in the same period in 2019 as per the General Statistics Office of Vietnam (GSO). In the first three months of the year, almost 35,000 businesses went bankrupt – the first time in decades the number of companies shutting down was higher than newly registered businesses. To help recover the economy, the government has launched a US$10.8 billion credit support package, lowered interest rates, delayed the payment of taxes and land use fees for several business lines. It has further issued financial assistance for employers and employees affected by the pandemic.

“Crisis makes the leader”. Vietnam is a living example that how a middle-income economy, with a low budget strategy, ensured zero deaths and came out of this crisis in an exemplary manner. Vietnam’s performance in tackling Covid-19 demonstrates clearly how, by focusing on early-risk assessment, effective communication and government-citizen cooperation, an under-resourced country with a precarious healthcare system can manage the pandemic. In facing an indefinite unknown situation- decisive leadership, accurate information, and community solidarity empower people to protect themselves and each other.