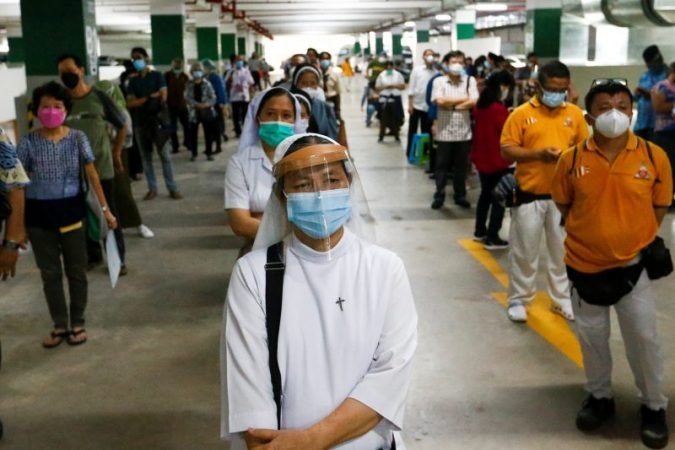 Nuns stand in line while waiting to receive their first dose of China's Sinovac Biotech vaccine for the coronavirus disease (COVID-19) during the mass vaccination program for clergy at the parking lot of Grand Istiqlal Mosque in Jakarta, Indonesia. REUTERS/Ajeng Dinar Ulfiana
PDF Button

As Indonesia faces spiking COVID-19 case, there is a rising oxygen shortage in the country and to deal with these difficult situations the Indonesian government has reached out to several countries including China, Singapore, Australia to address its oxygen shortage. Luhut Binsar Pandjaitan, the minister in charge of the country’s Covid-19 pandemic response, told the Associated Press on Friday that the government has received a shipment of over 1,000 oxygen cylinders, concentrators, ventilators and other health devices arrived from Singapore along with 1,000 ventilators provided by Australia. This is a major shift in the state of affairs of Indonesia just as two months ago Jakarta provided medical aid to India as it was the Covid crisis.

The present circumstances in the island country are telling of its healthcare infrastructure and the government’s preparedness as the world sails through the COVID calamity. As of now, Indonesia has recorded 2.4 million coronavirus cases and 64,000 deaths overall, among the highest tolls in Asia, but those have accelerated at an alarming rate, with daily fatalities doubling within the first week of July. This surge in the number of deaths and cases is a curtain-raiser of the grappling healthcare system of this fourth populous country of the world.

Hospitals are swamped, with growing numbers of the ill dying in isolation at home or while waiting to receive emergency care.  One of the reasons for such a grave situation today is the government’s lack of tracing of the cases as these figures are widely believed to be a vast undercount due to low testing and poor tracing measures.

Apart from this, the major problem is the low rate of vaccination among the population.  Which is as low as 5.4% of Indonesia’s 270 million population. Though the vaccination program of Indonesia has covered the healthcare workers and the doctors, a large number of its population is vaccinated with Sinovac. Indonesia, which has relied on the Chinese-made vaccine for its health workers, is struggling with a new surge in coronavirus cases. The latest outbreak, driven by new variants, has overwhelmed hospitals and burial sites in Jakarta and on the island of Java.

This pandemic has drawn the world’s attention towards the importance of having an efficient and cost-effective healthcare system where the medical facilities are accessible to all, and this is what Jakarta facing the need of. The Indonesian healthcare system is divided between private insurance schemes and basic state provisions. In January 2014, the country launched a compulsory health insurance scheme called Jaminan Kesehatan Nasional (JKN), which makes basic medical treatment and facilities available to all citizens. Most importantly larger hospitals and health facilities of the country are concentrated in the urban metropolitan areas. The quality of public healthcare in Indonesia is usually not up to the standard that is the reason why many depend mainly on the private sector. This public-private sector gap in the South-East nation’s medical apparatus is one of the main reasons why the country faces this today.