COVID-19: A manufactured cruelty of China and WHO? 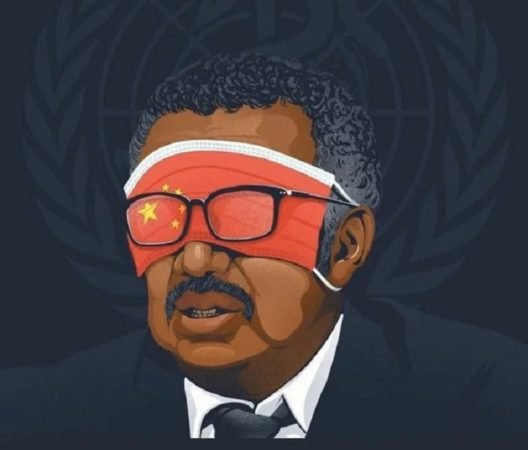 Illustration of WHO chief with Chinese flag mask on his eyes/ Image: Twitter
PDF Button

Today, Italy is searching lands for the cremation of the dead bodies of people who have died due to the COVID-19, as every existing grounds are already full now. A disease that started in China is now creating havoc in the world. Discussion of death toll here will be worthless as it’s increasing very rapidly. Various countries which were fighting for economic supremacy are now in the race to stop death numbers and saving lives of people from this deadly virus. Despite knowing the reality and severity of the situation, China was enthusiastically involved in trade wars and increasing its military supremacy.

World Health Organization (WHO), which call itself as the first responder to any attack on global public health and is always ready to tackle any emergency situation, was knowingly neglecting the upcoming danger. How can such an important organization of the United Nations (UN) system be this wrong or careless in predicting the upcoming challenge!

WHO have stated many misleading facts on 9 January 2020, “Novel Coronaviruses emerge periodically, as we have seen SARS emerged in 2002 and MERS emerged in 2012. Several known coronaviruses are currently circulating in animals that not yet infected humans” despite knowing the fact that people were started collapsing in Wuhan due to corona. And even WHO further said that “WHO does not recommend any specific health measures for travellers to and from Wuhan”. These things clearly indicate the irresponsible behaviour of WHO and must be held guilty for this cruelty.

On the other hand, the behavior of the U.S. has been quite irresponsible towards the whole event. U.S. Itself also paying a heavy price for this irresponsible attitude. The global community of health activist were, again and again, warning the world about the seriousness of the issue. But U.S. President was so confirmed that this disease will not impact his country. Today the situation is critical, the number of reported deaths in the U.S. has crossed the mark of 1000 and confirmed cases of infected persons is over 70,000 as on March 26.

From the very first day of the spread of this virus, China started to hide it. Even the whistle-blower of this disease Dr Li Wenliang who shared posts on social media warning of a SARS-like virus spreading in the city in December was reprimanded by police for sharing the information and made to sign a statement agreeing not to commit any more ‘law-breaking actions’. Later on, he died suspiciously due to coronavirus infection. But many reports suggest that it was the Chinese government behind this as China never wanted the truth to come out in front of the world.

After this event, when the virus started infecting the citizens of other nations. A blame game started between the U.S. and China. China continues to deny that the virus originated there while top U.S. officials, including Secretary of State Mike Pompeo, who pointed the finger directly at Beijing and started calling this virus a ‘Wuhan Virus’. Even President Donald Trump also call this virus as ‘Chinese Virus’ when he interacts with the media. Whereas Chinese Foreign Ministry spokesperson Lijian Zhao amplified a new conspiracy theory that the coronavirus did not originate China and may have been brought there by the U.S. Army.

Whatever it may, China cannot hide away from the fact that it was late in understanding the upcoming dangerous situation. It didn’t even stop the people to fly to other countries. China is a place which has produced Corona like many deadly viruses. Severe Acute Respiratory System (SARS) appeared in 2002 in China. It spread worldwide within a few months. Now, recent reports suggest that another virus with the name ‘Hunta Virus’ has taken a life. However, this virus is not new and there is a vaccine available to it.

China has always been a race to make domination in the UN systems. Both China and the U.S. have been using the UN as an automated machine in which coding is done by both. Financial contribution to the UN system has ended up in the unbiased attitude of the organization, which was once formed to think for the greater good of the whole planet. WHO’s director-general Dr Tedros Adhanom’s election is alleged to interfere by China and it’s alleged that China supported him without examining his credentials.

China has been in a race to become a global manufacturing hub for a long time. It was working day and night rapidly to achieve this goal. China calls itself ready to reorder global governance and become a rule maker. But one thing is sure, this coronavirus will be fatal for China itself and will end up being the final curtain on China’s nearly 30-year role as the world’s leading manufacturer.

As this problem will come to an end, World needs to think on the future of after doing the deeper analysis. Some theories suggest that this virus didn’t come from nature. This has been manufactured somewhere and answers to this somewhere is known to everyone. China must be shown a true mirror. Blind race to become an economic power cannot give an excuse gateway. China needs to answer some of the most difficult questions in the upcoming future.

India is in a complete lockdown of 21 days starting from 25 March. Death toll in India is increasing rapidly with cases of the infected persons crossing 700. Conditions are critical that Prime Minister himself has to come forward two times in a very short span. He has appealed the people to maintain social distancing. This is the toughest time when people are inside their houses and only those who are involved in essential services are working day and night to provide some relief for others. All the neighbouring countries are going through the same phase.

The world is changing at a very fast pace. Old theories and dogmas are at a verge of collapse. New structures are emerging and they are also required to be revisited and rechecked again and again in different time and frame. Terms of ‘National Interest’, which once called as universal, are now clashing from each other. Results being the disruption and turbulence in the whole world. COVID-19 is just an initial example of it. We need to get prepared for something more severe.