Whatever It Takes! G20 Leaders Vow To Combat Covid19 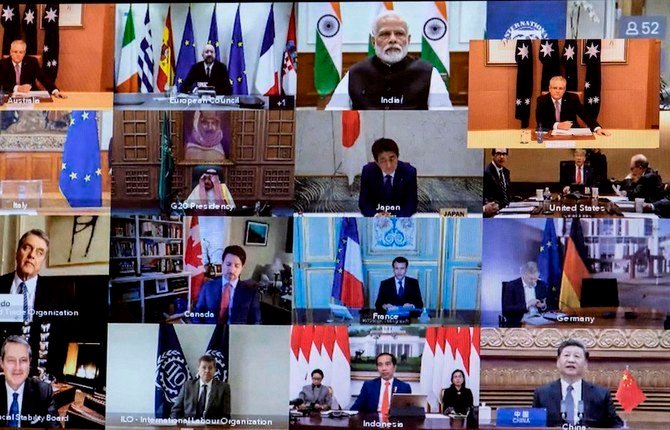 The Group of 20 major economies will do “whatever it takes” to overcome the coronavirus crisis and said on Thursday they are injecting $5 trillion into the global economy through national measures as part of their efforts to lessen its impact.

After an extraordinary summit by video-link, the G20 leaders committed to implement and fund all necessary health measures to protect lives while minimizing economic and social damage, and to avoid unnecessary interference with international trade.

They also expressed concern about the risks to fragile countries, notably in Africa, and populations like refugees, acknowledging the need to bolster global financial safety nets and national health systems.

“We are strongly committed to presenting a united front against this common threat,” the G20 leaders said in a joint statement following their 90-minute call.

Saudi Arabia, the current G20 chair, called the summit amid earlier criticism of the group’s slow response to the disease that has infected more than 470,000 people worldwide, killed more than 21,000, and is expected to trigger a global recession.

Saudi King Salman, in opening remarks, said the G20 should resume the normal flow of goods and services, including vital medical supplies, as soon as possible to help restore confidence in the global economy.

The group committed to large-scale fiscal support on top of the $5 trillion of targeted fiscal policy, economic measures and guarantee schemes.

World Health Organization director-general Tedros Adhanom Ghebreyesus was to address the G20 to seek support for ramping up funding and production of personal protection equipment for health workers amid a global shortage.

“We have a global responsibility as humanity and especially those countries like the G20,” Tedros told a news conference in Geneva on Wednesday. “They should be able to support countries all over the world.”

On health, the G20 leaders committed to close the financing gap in the WHO’s response plan and strengthen its mandate as well as expand manufacturing capacity of medical supplies, strengthen capacities to respond to infectious diseases, and share clinical data.

Despite calls for cooperation, the G20 risks entanglement in an oil price war between Saudi Arabia and Russia and frictions between the United States and China over the origin of the coronavirus outbreak.