Trump’s Deal of the Century: What options do Palestinian leaders have? 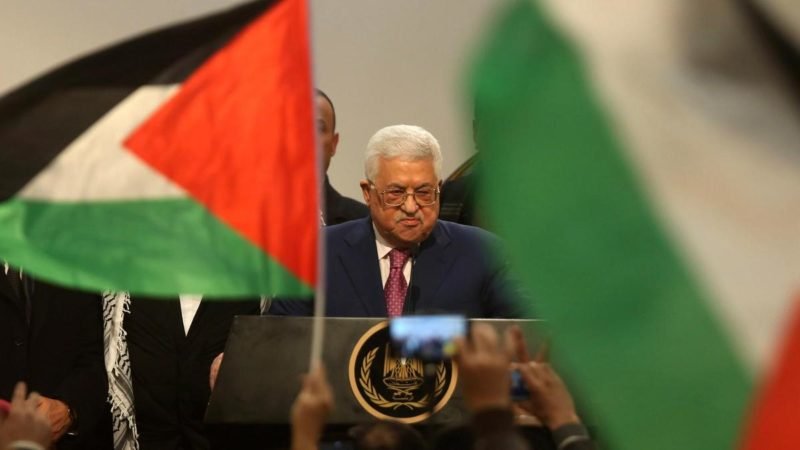 Before US President Donald Trump announced his long-delayed plan for the Middle East, Palestinian leaders had already rejected the proposal, threatening to withdraw from the Oslo Accords.

The plan presented on Tuesday, envisions the Israeli annexation of large swaths of the occupied West Bank including illegal settlements and the Jordan Valley, giving Israel a permanent eastern border along the Jordan River.

At his announcement at the White House, Trump claimed that it would lay the foundations for a “realistic two-state solution” in the long-running conflict.

But Palestinians have denounced the proposal as utterly biased in favour of Israel, and leaders have promised to take action.

Such a move would sever relations between the Palestinian Authority (PA) and Israel, including its controversial security coordination.

Diana Buttu, a Haifa-based analyst and former legal adviser to Palestinian peace negotiators, told Al Jazeera that threats of throwing in the key and dismantling the PA have been made for at least the past decade, but the Palestinian leadership has never followed through on any of their statements as they have never devised a “Plan B strategy”.

“A plan B strategy involves holding Israel accountable, it means supporting the BDS movement, it means pushing for Israel to be ostracised from the international community, but they’re not willing to go down that path,” Buttu said.

Another analyst and a senior fellow at Shabaka, Yara Hawari said, “that PA President Mahmoud Abbas had set up a committee for ending all the agreements with Israel last year, but nothing came out of it.”

“That would spell an existential crisis for the PA to pull out of Oslo. It could very well mean the dismantlement of the PA. So I don’t think that’s necessarily going to happen immediately,” Hawari said.

‘My enemy’s enemy is my friend’

An emergency session of the Arab League will take place in Cairo on Saturday after Abbas asked Arab nations to join together against the plan, which Trump had dubbed the “deal of the century”.

Another meeting with the Organisation of Islamic Cooperation (OIC) will be held on Monday.

“The deal has no touch with reality or with international law. We have called on the Arab League and the European Union to support us,” Nabil Shaath, senior adviser to the Palestinian president said.

But there appears to be little unity within the Arab League bloc as states are divided over the issue, with Oman, Bahrain and the United Arab Emirates (UAE) expressing support for Trump’s deal.

The Arab League has done little more than provide financial support to the Palestinians for decades, Buttu said.

“We’ve gotten to place where Arab states believe that ‘My enemy’s enemy is my friend.’ Their enemy being Iran. Their enemy’s enemy, Israel is now their friend. And that’s very dangerous. Because today it’s Palestine, tomorrow it’s another country,” Buttu said.

Looking to the international community, such as the United Nations, for help may not provide a useful forum either as the United States holds a veto at the UN Security Council and will continue to do so, Buttu said.

On Wednesday, Palestinian Ambassador to the UN Riyad Mansour told reporters that Abbas will visit the UN within two weeks to address the Security Council, during which time a draft resolution will be submitted to the council.

But facing the prospect of a US veto, Palestinians would only be able to take the draft text to the UN General Assembly (UNGA) where a vote would show how Trump’s plan has been received internationally.

“This is something that needs to be done and should have been done for the past several decades since the establishment of the PA,” Buttu said.

“They’ve been reluctant to go down the path of holding Israel accountable for such a long time because they were afraid it would either hinder the peace process, anger the US, or ostracise the US.

Trump’s term has been marked by moving the US embassy to Jerusalem and formally recognising Israeli sovereignty over the occupied Golan Heights, breaking with long-standing international consensus.

With US presidential elections coming up in November, some analysts have suggested that a new president could possibly reverse his decisions.

However, Hawari said the reality on the ground “is one of apartheid” and that urgent action was required.

“Palestinians do mobilise every day against it. But now I think it would be a mistake to do what much of the international community has done which is a wait and see approach. There is no waiting and seeing. This is an ongoing process in consolidating apartheid and theft of Palestinian land,” Hawari said.

Abbas has also suggested that Palestinian parliamentary and presidential elections could soon be held for the first time since 2005.

But analysts say a vote is unlikely to take place soon since, noting that Abbas has said this repeatedly since 2009 without a vote being held.

In any case, if immediate elections were to be held, it would only be “used as a tool to boast or legitimise the current authorities,” Hawari said.