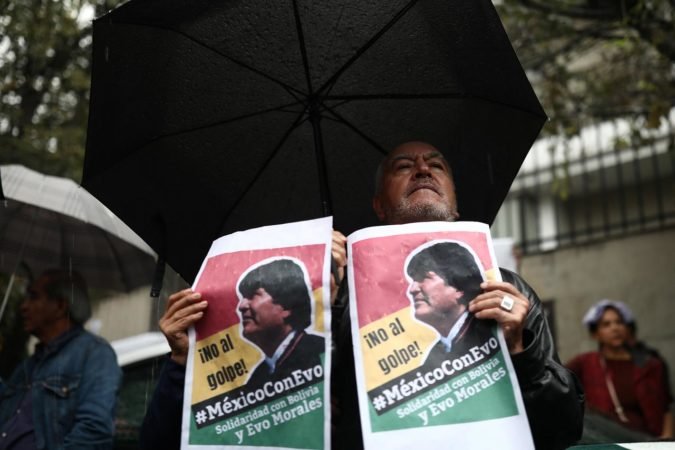 The Mexican government’s support has helped cement its emerging role as a bastion of diplomatic support for left-wing leaders in Latin America.

“Evo Morales is now on the Mexican government’s plane, sent to ensure his safe journey to our country,” Foreign Minister Marcelo Ebrard wrote on Twitter.

Ebrard also tweeted a photo of Morales seated in the Mexican Air Force plane, displaying a Mexican flag across his lap.

Ebrard had said the life of Bolivia’s first indigenous president was in danger and the decision to grant him asylum was in Mexico’s long tradition of sheltering exiles.

A U.S. official said President Donald Trump’s administration has no objection to Mexico’s asylum offer to Morales, given the hope his absence could help stabilize Bolivia.

But it will take some time to see whether that happens, and much could depend on what kind of message Morales sends to his followers in Bolivia once he is in Mexico, the official said, speaking on condition of anonymity.

Morales’ government collapsed on Sunday after ruling party allies quit and the army urged him to step down in the wake of a disputed election, adding to a sense of crisis in Latin America, which has been hit by weeks of protests and unrest.

Looting and roadblocks convulsed Bolivia after Morales stepped down. He said “violent groups” attacked his house.

“His life and integrity are at risk,” Ebrard had told reporters earlier. “We will immediately proceed to inform Bolivia’s foreign ministry that under international law, it should offer safe conduct.”

Mexico would inform the Organization of American States, and the United Nations, he added. The Washington-based OAS delivered a report on Sunday citing serious irregularities during Bolivia’s October vote.

“He acted diplomatically to try to facilitate the arrival of the plane for Evo,” Fernandez said at an event in Buenos Aires.

The departure of Morales, one of a wave of leftists who dominated Latin America’s politics at the start of the century, comes amid widespread rejection of incumbent leaders from either side of the political divide in the region, from Mexico to Brazil and Argentina.

Argentina last month elected left-leaning Fernandez, as voters rejected economic policies that were aimed at stabilizing the economy but which deepened poverty and inflation.

The resignation of Morales, who governed for 14 years, followed protests in Ecuador and Chile that forced their governments to step back from policies raising fuel and transport prices.

Ebrard said earlier on Monday his government viewed Sunday’s events in Bolivia as a “coup” because the military broke with the constitutional order by pressing Morales to resign.

Mexican President Andres Manuel Lopez Obrador praised Morales, saying he chose to resign rather than put the lives of Bolivia’s citizens at risk.