In her new book, Haley is doubling down on her support for Trump 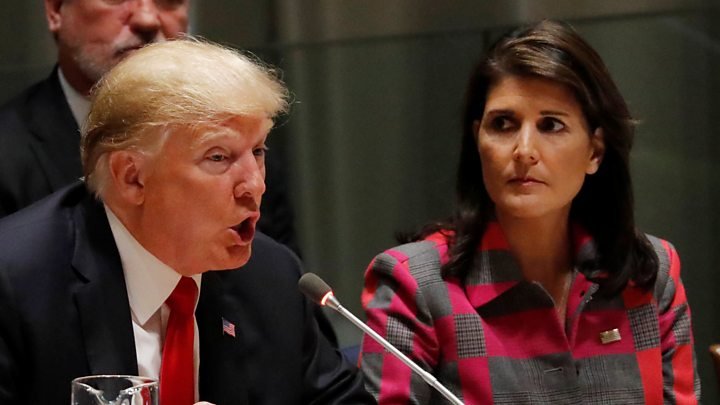 Nikki Haley, the former US ambassador to the United Nations, has claimed former secretary of state Rex Tillerson and former White House chief of staff John Kelly tried to recruit her to work around Donald Trump in an effort to “save the country”.

Haley, who left the administration last year, makes the claim in a book, With All Due Respect, that will be published on Tuesday, the Washington Post reported.

In Haley’s telling, Tillerson told her that if Trump was left unchecked, people would die.

“Kelly and Tillerson confided in me that when they resisted the president, they weren’t being insubordinate, they were trying to save the country,” Haley writes.

The pair told her that “it was their decisions, not the president’s, that were in the best interests of America” and “the president didn’t know what he was doing”.

Haley’s claims add to a picture of the White House as a hive of insurrection, with former business leaders, diplomats, career politicians and aides attempting to stymie the wilder impulses of a wildly unconventional president.

In September 2018, Watergate reporter Bob Woodward published Fear, an account of Trump’s first year in power in which senior aides were reported removing documents from the Resolute Desk. Two books by Michael Wolff, Fire and Fury and Siege, have painted a similar picture of dysfunction, faction and chaos.

Another new book on the Trump presidency is due on 19 November. A Warning, by an anonymous administration official, has been extensively reported. Among its contents is a description of a president spiralling from crisis to crisis “like a 12-year-old in an air traffic control tower”.

The author, who last year produced an explosive column in the New York Times, reportedly claims that some White House officials drew up plans for a mass resignation, or “midnight self-massacre”, to draw attention to Trump’s behaviour.

Tillerson, who was secretary of state from 2017 until he was fired by tweet in March 2018, reportedly while on the toilet, did not respond to requests for comment, the Post said.

But Kelly offered a pseudo-confirmation of Haley’s claims, saying that if providing the president “with the best and most open, legal and ethical staffing advice from across the [government] so he could make an informed decision is ‘working against Trump’, then guilty as charged.”

Kelly recently earned Trump’s ire by telling an audience in Georgia the president faced impeachment because he had not listened to his former chief of staff’s advice.

Haley, a former governor of South Carolina, writes that she agreed with many of Trump’s most controversial decisions, including pulling out of the Iran nuclear deal and the Paris climate accord and relocating the US embassy in Israel to Jerusalem.

Speaking to the Post, Haley said that though she opposed Trump’s infamous request to the Ukrainian president for a public investigation into Joe Biden, a political rival, “it’s hard for me to understand where the whole impeachment situation is coming from, because what everybody’s up in arms about didn’t happen”.

Trump and senior aides are alleged to have withheld nearly $400m in military aid and dangled the prospect of a White House meeting, in a clear quid pro quo. Public hearings in the House impeachment inquiry will begin this week.

“Do I think the president did something that warrants impeachment?” Haley asked. “No, because the aid flowed. And, in turn, the Ukrainians didn’t follow up with the investigation.”

In her book, the Post said, Haley does show herself standing up to Trump, including over his relationship with Russian president Vladi­mir Putin and over what she calls his “moral equivalence” in blaming “both sides” after a white supremacist march in Charlottesville turned deadly in August 2017.

“A leader’s words matter in these situations,” she writes. “And the president’s words had been hurtful and dangerous. I picked up the phone and called the president.”

Haley also discusses her response as governor to a mass shooting at an African American church in Charleston, South Carolina, in the summer of 2015. In the aftermath, she says, she was treated for post-traumatic stress disorder.

Haley has been talked of as a possible replacement for Mike Pence as Trump’s vice-president but her report of Tillerson and Kelly’s efforts is likely to ruffle presidential feathers. She adds that she argued that Trump had been elected, so if they disagreed with his policies strongly enough, they should quit.

“I just couldn’t get my arms around the fact that here you have two key people in an administration undermining the president,” Haley told the Post.

Tags: nikki haleyTrumpWith All Due Respect