Microplastics may affect how Arctic sea ice forms and melts 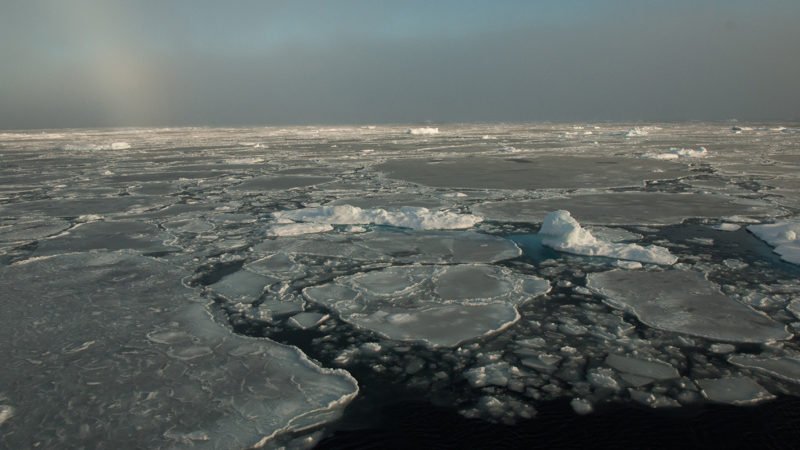 Plastic pollution in the oceans has become an important societal problem, as plastics are the most common and persistent pollutants in oceans and beaches worldwide. In the common imagination, plastic waste is often associated with bottles drifting in the ocean, fishing gear washing up on beaches or plastic bags that turtles mistake for jellyfish and eat.

But those larger particles are just the tip of the iceberg. Smaller particles are also an important part of the problem. Plastic particles smaller than five millimetres are called microplastics. They may originate from deliberate design (such as cleaning agents or personal care products), breakdown of larger pieces of plastic or microfibers from textiles.

The impact of microplastics on the environment and human health is still being studied.

If people assume the Arctic environment is unaffected by what humans discard into the oceans, they are wrong. The pristine waters of the Arctic Ocean are under silent threat by those particles as they drift along with the ocean currents over long distances.

Microplastic concentrations in the Arctic are expected to increase rapidly due to increasing freshwater input and the intensification of shipping traffic and resource development activities. Given the exceptional vulnerability of Arctic marine ecosystems, there is an urgent need to assess the distribution, pathways and fate of microplastics in the Arctic.

In a recent paper published in Marine Pollution Bulletin, we studied whether and how microplastics could be incorporated within the sea ice structure. Microplastics within sea ice could impact the absorption of incident solar radiation. This affects sea ice albedo — how the ice reflects solar energy — one of the key properties of sea ice in terms of regulation of the heat exchange between the ocean and the atmosphere.

Changes in sea ice albedo would have strong consequences on the annual cycle of sea ice growth and melt. To test our hypothesis, we set up a microcosm study at the [Sea-ice Environmental Research Facility at the University of Manitoba], an outdoor pool where we can grow sea ice.

Two sets of 12 microcosms, measuring one cubic metre, were made using galvanized aluminium pipes as frames and cotton bed sheets as walls. The first set was used to measuring light levels, while the second set was used to collect sea-ice samples. We manually added microplastic particles to monitor their incorporation into the sea ice as it grew. We used four different concentrations: control (no particles added), low, medium and high (about 120, 380 and 1,200 particles per litre, respectively).

We used a dye called Nile red to follow the microplastics as the ice froze. Under fluorescent light, dye caused microplastics to glow, allowing us to see how sea ice concentrates microplastics within its structure and, once incorporated, how those particles remain in the ice matrix.

For regions with higher microplastic concentrations, or should microplastic concentration increase, we expect sea-ice properties might change. These changes would affect most notably albedo, but also photochemical and photo-biological processes occurring in sea ice, such as light availability for algae living at the bottom of the ice cover, with potential impacts on the base of the Arctic food web.

This article originally appeared in The Conversation