Bilateral or International Dispute? Clash over Kashmir at UNHRC 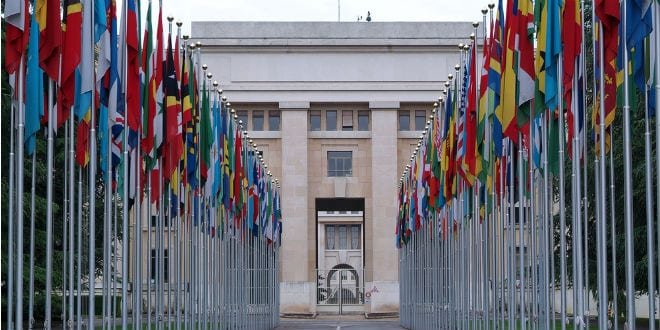 Against the Pakistan high-voltage Drama at UNHRC, Geneva, India cast Vimarsh Aryan, a diplomat from the Indian state of Jammu & Kashmir to rebut the allegations by Pakistani Foreign Minister S.M. Qureshi, who earlier called for international intervention in Kashmir.

Aryan, denied the allegations calling them Pakistan’s own regional ambitions. He said, “Pakistan realises that our recent decision cuts the very ground from under its feet by creating obstacles in its continuing sponsorship of cross border terrorism against India.”

“Pakistan’s rhetoric will not distract international attention from Pakistan’s persecution and elimination of religious and ethnic minorities – be it the Christians, Sikhs, Shias, Ahmadiyas and Hindus. This is the reason that Pakistan no longer publishes official statistics about its minorities as India does,” he said.

Earlier in his address, Pakistan’s FM Qureshi sought focussed discussion on what he termed were Indian atrocities in Kashmir calling on the international community to “address the warning signs of a looming catastrophe”.

“For the last six weeks, India has transformed Occupied Jammu and Kashmir into the largest prison on this planet,” Qureshi said accusing India of having arrested more than 6,000 people without due process.

“India’s draconian emergency laws cannot be allowed to stand,” Qureshi said referring to the restrictions put in place by India just days ahead of the 5-6 August move to revoke the special status of Kashmir adding it exposed the “true face of largest democracy in the world” which had aspirations of becoming a permanent member of the UN Security Council.

Qureshi called India’s references to “cross-border terrorism” to justify its crackdown as a “red herring to divert international opinion”, and said he feared India might “even attack Pakistan”.

Qureshi urged the UNHCR to heed recommendations by UN rights chief Michelle Bachelet and her predecessor Zeid Ra’ad Al Hussein to launch a so-called international Commission of Inquiry (COI) into the Kashmir situation.

“If India has nothing to hide, it should allow unhindered access to the Commission of Inquiry,” he insisted. Pakistan was willing to provide access to its side of the so-called Line of Control, he added.

Earlier in its general country statement to the UNHRC on Tuesday, India said its Constitution was “supreme” and “guaranteed fundamental rights to all citizens without any distinction” and dismissed Pakistan foreign minister Shah Mehmood Qureshi’s comments as a “fabricated narrative” that came from “the epicentre of global terrorism, where ring leaders were sheltered for years”.

“Pakistan conducts cross-border terrorism as a form of alternate diplomacy,” said Vijay Thakur Singh, the head of the Indian delegation to the UNHRC.

“The Indian Parliament has been adopting a series of progressive legislation,” Singh said. The government “is taking affirmative actions to promote socio-economic equality and justice for the underprivileged”, she added.

The abrogation of Article 370, she said, “will ensure that these progressive measures will also be fully applicable to our citizens in Jammu & Kashmir and Ladakh”.

“These decisions were taken by our Parliament after a full debate that was televised and enjoyed widespread support. We wish to reiterate that this sovereign decision, like other legislation passed by Parliament, is entirely internal to India. No country can accept interference in its internal affairs, certainly not India,” Singh asserted.