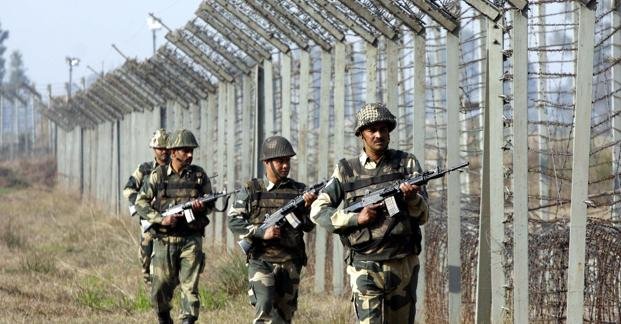 In the case of cross-border terrorism, Pakistan is pursuing its own brand of ‘two-track’ policy.  While it wants a dialogue with India, it has kept up the level of violence.  In its latter part of the strategy, Afghanistan’s utility is the greatest.  To wage a proxy war against India, Afghan heroin pays for the weapons and salaries of Kashmiri militants.  To escape the “terrorist state” label Pakistan places its jihadi camps across the Durand Line. In fact, the movement of Kashmiri people was hijacked by the Afghan-based elements. And from the start, the real thrust of Pakistani terrorism in Jammu and Kashmir is not to give a chance to the people of the state to vote for their future but to channel the overflow of arms and mercenaries from the war-ravaged areas of Afghanistan, which would flood Pakistan if not sent elsewhere.  It is true that the idea has caught the imagination of the Pakistani people and become a sort of precondition to any “settlement” of India-Pakistan question.  Even today this precondition exists in the Pakistani establishment.  In June 2001, on the eve of his arrival in Agra, Musharraf told the Karachi monthly, The Herald that violence would decline as talks on Kashmir made progress.  After the collapse of the Agra summit, it became quite clear, ‘The only real bargaining leverage that Pakistan wields in Jammu and Kashmir is through its proxies, the Jihadi groups operating in the state’. While India depended entirely on the hope that a resumption of negotiations would end the problem.

In the meantime change of guards took place in Islamabad and New Delhi respectively.  While a democratic government was sworn in under the premiership of Benazir Bhutto in Pakistan, it followed the taking over of the second non-Congress government of National Front headed by Vishwanath Pratap Singh in India.  Though both the countries had been obsessed with an inexorable state of “new cold war” on the subcontinent in the light of Pakistan’s covert or overt support to secessionists in Punjab and Jammu and Kashmir, the new Indian government adopted the policy of friendliness and mutual understanding with neighbouring countries, particularly with Pakistan.  A foreign office spokesman said, ‘It is our hope that Pakistan will exercise similar restraint and desist from giving encouragement to terrorism directed against India. Such action violates bilateral, regional and international obligations including the terms of the Shimla Agreement and is not conducive to peace in the region’. The provocative statements of Pakistan and terrorist support by it were considered by India as “unfortunate” and despite threatening posture, the new dispensation did not abandon the normalisation process entirely.  In three respects the National Front Government’s record had been creditable.  First, in spite of developments in the Kashmir valley and a certain amount of militancy in Islamabad’s attitude, V. P. Singh’s Government considered it appropriate to keep the dialogue open. Secondly, when Benazir’s Government was dismissed, New Delhi avoided making any comments except for wishing well for a strong and stable Pakistan. Third, India’s active diplomacy in the Arab countries and the western world it was instrumental, to a large extent, in containing Pakistani efforts to internationalise the Kashmir issue.

Domestic factors of India and Pakistan

Domestic as well as international are the two important determinants that govern Pakistani action in the State.  The period that was responsible for the initiation and growth of cross-border terrorism largely witnessed the power rivalry between the democratically elected ruling elite and the military. Prime Minister Benazir Bhutto inherited a mixed economy. Tied to these were two experiments of democratic rule, one of which was carried out by her father; and populist Islamisation process that was used by all as a tool for legitimacy.  Her task was not just to undo autocracy but build an economy and industry that had for long been propped up by external aid.  Her success at keeping the army at bay had also been uncertain. Therefore, militant posture for her became a need of the hour and in such a situation Kashmir remained the most readymade tool. In addition, it was just a chance that both India and Pakistan were embroiled in grim problems outside Kashmir–India in Punjab and Assam and Pakistan in the volatile steamy city of Karachi where armoured personnel carriers were now common sight in the streets.  There were the host of problems for Pakistan in other states as well apart from the continuing and running battle between the federal and Punjab government. The then government of Pakistan was beholden to the army and to the President to remain in office.

At that time India too was ruled by a minority and weak government headed by V. P. Singh, supported by Bharatiya Janata Party and Hindu fundamentalism. The situation in India convinced Pakistan that this was the time to liberate Kashmir.  Among the military stalwarts, General Chisti, Arif and Gul were of the view that when the government in India is weak it is vulnerable to military and political pressures in the valley along with direct and indirect international wish to settle the issue of Kashmir.  Hence they calculated that the situation would either lead to the decapitation of India by the loss of Kashmir and parts of Punjab as a result of developments on the ground or to an Indo-Pak deal by a softened and chastened India, and a tough and principled Pakistan. Finally, they concluded that in either way, militarily or diplomatically, India would lose in Pakistani thinking and 1971 would be revenged and with Pakistani getting its parity with India.

So far as the international determinants of the Pakistani action in Kashmir were concerned, it was tied to Islamabad’s perception about India’s position regarding the state of Jammu and Kashmir.  In the first place, Pakistan must have reason to believe that India would be reluctant to mobilise itself into a war over the issue.  Reason for such reluctance would lie both in civilian and military thinking in India. Democratic systems are rarely tuned to instantaneous response in the face of crisis because it is linked to the decision-making process of the political system.  In India, while the military would be consulted, the decision about the war would be basically political.  Islamabad’s second perception was related to the situation in Kashmir itself.  As the Government of India had implemented democracy in Jammu and Kashmir half-heartedly and on the other Pakistan perceived the accession of Kashmir to India as one attained by force, the Kashmiri population would welcome intervention by Pakistan to liberate it from India.

But finally was the consideration of international support that Pakistan hoped, particularly from the US and China. Pakistan has reason to believe that both the United States and China along with others would extend international sympathy.  Given the religious dimension of the issue, Pakistan also counted on the continued support of the West Asian countries.  At that time the Soviet Union, India’s only ally was in a state of internal influx and Gorbachov himself had been supporting freedom movements in Eastern Europe.  The Soviet system was also trying to cope with demands for change from its own ethnic minorities and nationalities. In Pakistan’s perception, India would find it difficult to get international support over its position in Kashmir.  However, Pakistan’s initial efforts to project Kashmir on the world stage failed because the major Powers had other preoccupations and were loath to add a hoary contentious issue to their agenda. The Shimla agreement came in handy for the world to put away the issue of Kashmir as the world knows that there can not be a radical solution short of war.