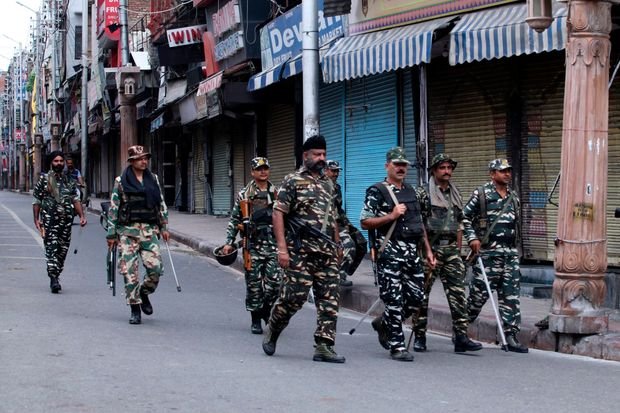 Pakistan has been using terrorism as an instrument of State policy, waging a low-intensity covertly planned conflict against India for over the last 30 years.  This policy is predicated on the Pakistani calculation that as long as the levels of intrusive terrorist violence remain short of a threshold, Pakistan could inflict damage upon India without attracting any punitive action against itself.  There is also the Pakistani assessment that important powers would be willing to tolerate the situation in Jammu and Kashmir as long as this terrorist violence does not expand into a general conflict between India and Pakistan.  As a result, the latter’s collusion with Jihadi groups operating in Kashmir has weakened Islamabad’s ability to influence any future political dispensation in the Valley.  Pakistan’s chosen Kashmir policy has also exacerbated domestic problems in multiple ways that do not require retelling.  This debilitating condition can only be changed if the Pakistani leaders come to accept the proposition that a principled position on the Kashmir dispute can not be successfully advanced through unprincipled means. The real thrust of Pakistani terrorism in Jammu and Kashmir is not to give a chance to the people of the state to vote for their future but to channel the overflow of arms and mercenaries from the war-ravaged areas of Afghanistan.  The involvement of foreign mercenaries and international religious extremist organisations has become a challenge for the Indian agencies.  Unfortunately, these covert mercenaries are supported not only by Pakistan but by some other Islamic countries as well.  Extraneous vested interests have developed in terms of Pan-Islamic agendas, narco-terrorism, arms sales and so on, which negatively affects the prospects of a reasonable dialogue focused on specific issues related to Kashmir.

Sporadic cross-border incidents along the Indo-Pak border were so surprised for New Delhi because it did not pose a threat to either side.  However, it got an alarming rate at the close of the Eighties and especially with the Soviet’s withdrawal from Afghanistan.  The Pakistani military’s Inter-Services Intelligence (ISI) had, during the 1980s military regime of General Zia acquired resources and autonomy as well in coordination with the Central Intelligence Agency (CIA), who sponsored war against the Soviet take-over of Afghanistan.  In the post-withdrawal phase, the ISI was in a position to focus on the new war in Kashmir.  It began to recruit Kashmiri youths for training and arming in Pak-controlled camps.  It got, for the first time since 1947, a large number of Kashmiris’ prepared to join the terrorist organisations managed and maintained by the ISI. It was revealed in the recent book, The Lost Rebellion, written by Manoj Joshi, that once General Zia and Pakistan’s ISI concocted the scheme of recruiting local disaffected Kashmiris, and arming and training them to become insurgents.  Till 1987, Pakistan received only a trickle of recruits, but that turned into a flood after Rajiv Gandhi forced the National Conference into a shot-gun marriage with the Congress in 1987 and Farooq Abdullah allegedly rigged elections in the Valley to ensure his return to power. What followed then was a genuine insurgency.

The whole story began in late 1986 when Farooq Abdullah concluded a rapprochement with the Congress regime at the centre.  Under its terms, he was reinstalled as chief minister pending fresh Assembly elections in March 1987, which he undertook to contest in alliance with the Congress Party.  This alliance was deadly opposed by the Muslim United Front (MUF) coalition.  It was mainly represented by a new generation of young men who born in the 1960s.  The organisation was formed as an independent, pro-people entity to fight NC’s opportunistic alliance with the detested Congress at the polls.  The process and its outcome irrevocably tainted Farooq Abdullah and his supporters in the eyes of their former voters as just another clique, serving as tools of the Indian state in return for the spoils of political office. This was the moment when the valley and some of its contiguous areas lost all residual confidence in India’s political system. With this, the Kashmir conflict witnessed a changed mood of the younger generation in the Valley.

Apart from this internal factor, there were international elements too that gave a helping hand to Pakistan and the ISI in spreading their network in the state of Jammu and Kashmir.  International events, particularly that took place in late 1989 and early 1990, played an important role.  The first Palestinian intifada against Israeli occupation was a significant reference point, as was the collapse of repressive one-party regimes in central and eastern Europe after mass demonstrations in the autumn of 1989.  It was noted by a Srinagar scholar, “We felt that if the Berlin wall could be dismantled, so could be the Line of Control”.The young Kashmiri guerillas, for their part, were inspired by the 1989 Soviet withdrawal from Afghanistan in the face of Afghan Mujahideen resistance and success of Tamil Tiger guerillas in Sri Lanka against the vastly superior Indian force.  It also became clear soon that these foreign expeditions were fundamentally misguided and increasingly costly in terms of resources and combat causalities.

From here onwards, the ISI has successfully financed, cultivated and armed a powerful section of the Kashmiri people.  By 1990 there were over 30 militant groups in Kashmir and 29 of these had been receiving assistance and shelter in Pakistan.  A US task force on terrorism and unconventional warfare, set up by a House Republican Research Committee, covered, in its report, various aspects of Islamic terrorism, its origin and spread to Afghanistan, Sudan and Iraq. The report held ISI responsible along with Pakistan for abetting and sponsoring terrorism in Kashmir as part of its overall effort to promote Islamic international terrorism.  It noted that in 1986 Pakistan expanded its operations to sponsor and promote separation, primarily in Kashmir, as a strategic long-term programme. Among the most crucial activities of ISI were to propagate religious fundamentalism in small but lethal doses and train and indoctrinate selected leaders from Kashmir to create militant cadres.  The report said that several youths from Kashmir valley and Poonch district in Jammu region were given extensive training in the use of automatic weapons, sabotage and attacks on security forces. The US State Department and the various reports published by several agencies confirmed that the extent of the growing state support for terrorism and insurgency in Kashmir is clearly reflected in the evolution of the organisations operating there.