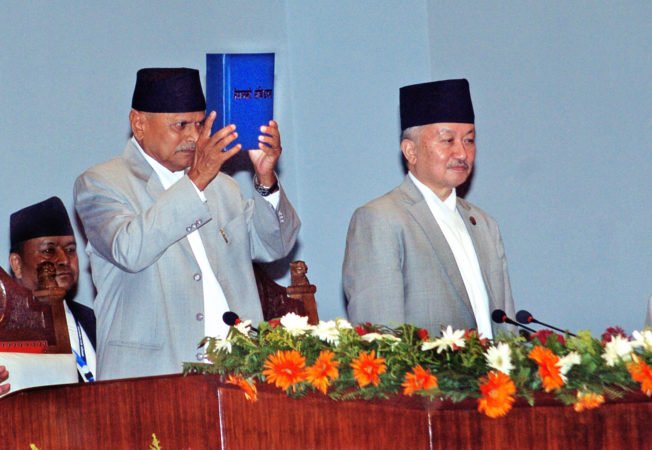 After weeks of large-scale protests, in the last week of June, the federal government of Nepal withdrew a controversial bill that would have allowed it greater control of the country’s numerous temple trusts called guthis[1]. But while this step towards course correction helped calm the streets for the time being – local newspapers compared the demonstrations to the 2006 Democratic Movement that compelled the monarchy to reinstate parliament – the government still has to deal with a slew of other legislative troubles at hand. Almost all of these, including the anti-guthi bill protests, stem from Nepal’s continued struggle to move away from a unitary form of government, and implement the three-tier federal structure, as envisaged by the Constitution that was promulgated in 2015.

Be it the federal government’s Federal Civil Servants Bill, the Nepal Police and Provincial Police Bill, the Peace and Security Bill, or the Media Council Bill, all have been criticised for violating the spirit of federalism. For example, the Federal Civil Servants bill and the Nepal Police and Provincial Police Bill give Kathmandu the authority to appoint senior bureaucrats and police chiefs of the provinces, respectively, thereby sidelining the provincial governments[2]. Similarly, the Peace and Security Bill allow sweeping powers to Kathmandu’s representative in the provinces, the chief district officer, to effectively override provincial authorities[3]. The Media Council Bill lets the federal government impose hefty fines for any defamatory reportage, and has spurred Nepali journalists and civil society, in general, to take to the streets in protest[4].

As the debate over the various bills listed earlier shows, a key issue with implementing federalism has been the formalisation of power-sharing equations between federal, provincial and local authorities. In other words, who controls what, which agency is responsible for what portfolio. The Constitution offers some guidance, for example, there are five lists delineating absolute and concurrent powers of each level of government, but it is also often vague, allowing for different interpretations, and leading to the possibility of one level of government emerging more equal than others.

Take, for example, the issue of law enforcement. The Constitution allows for the federal government and the seven provincial governments to have their own police forces but there is not much clarity on their exact jurisdictions[5]. Hence, the debate over the appointment of provincial police chiefs and the powers of the Chief District Officer (CDO). Another example of this is from last year when Province Number Two raised eyebrows when it passed its own state police act before the federal government could pass the federal police act[6].

Another area of serious contention is the re-organisation of bureaucracy[7]. Earlier, there was only the federal government, and all bureaucrats were federal employees. Now, these bureaucrats have had to be adjusted across three levels of government and many more are being brought in. The federal government is angling for greater control over state administrators, which has obviously irked the provincial governments. The bureaucrats themselves are also important stakeholders in this situation, both as public administrators (for example, they governed even when there were no elected political leaders) as well as political agents (for example, their trade unions bartered their support for the popular movement for ‘automatic promotions)[8].

In addition to these legislative missteps, there is the federal budget that was placed in Parliament last month, and, similarly, criticised for not allocating enough resources to the provinces and local governments[9]. But while there is no arguing that a skewed distribution of financial resources can effectively defeat the entire purpose of federalisation[10], it must also be kept in mind that without a proper mechanism or framework for inter-governmental fund transfers, the purpose of fiscal federalism will not be served[11]. Indeed, the issue of inter-government relations, in general, is one that still needs a lot of work. Ideally, this is where the judiciary should step in and help interpret the Constitution to resolve inter-government disputes. For example, last month, the Supreme Court pulled up the federal government on the issue of pork barrel funding[12]. But there is a lot more to be done even as the judiciary struggles to find its feet while policymaking is paralysed especially at the provincial and local levels[13].

Indeed, it can be argued that the entire concept of federalism is still a work-in-progress in that country. The question then is: Will it hold? Generally speaking, there is a growing sense within Nepal’s political class that the government of Prime Minister KPS Oli is not interested in federalism, and might, in fact, be working to turn the process towards a more centralised model of governance[14]. But while there may be ample reason to point fingers at the incumbent regime, it is equally important to acknowledge that the problem goes beyond party politics and is, in fact, systemic and structural.

Over the past 250 years, Nepal has traditionally had a centralised and unitary form of government, with power being concentrated in the hands of the Kathmandu elite, comprised of the Palace, the central secretariat, and the Army[15]. Even when efforts were made in more recent decades to make the process of governance more inclusive or allow for greater grassroots participation, the core structure remained the same. For example, when King Mahendra introduced the ‘party-less’ panchayat system in 1962 to add a semblance of popular legitimacy to his authoritarian rule, the new legislators found themselves to be little more than rubber stamps for the Palace[16]. Decades later, in 1996, when the Maoists launched their insurgency, federalism featured prominently on their agenda. But by the time hostilities ended, the issue had been sidelined. Neither the 2005 agreement nor the formal 2006 peace deal between the rebels and the Nepali state made any mention of federalism[17]. Even the 2007 interim constitution initially defined Nepal as an “independent, indivisible, sovereign, secular, inclusive and fully democratic State”.

It was only after the Madhesi communities in the southern Terai region, who had been advocating for some form of federalism since the 1950s, rose in violent protest that the 2007 constitution was quickly amended to include federalism[18]. This was a major turning point in Nepal’s socio-political history but it was not one that could be delivered overnight. The Constituent Assembly (CA) elected in 2008 struggled for the next four years over the exact contours of Nepal’s federal structure until it was dissolved in 2012, its job unfinished. A new constituent assembly was elected in 2013 which eventually delivered a constitution in 2015. The new constitution mandated a three-tier – federal, provincial, and local – government; necessitating a massive overhaul of the entire state structure. Elections were held again in 2017 and more than 20,000 representatives were elected. In the two years since these leaders have sought to actualise the new federal structure but the process has been long and arduous, marked by a plethora of administrative, legal, and fiscal challenges.

This is partly because the concept of federalism and how it would redefine the social contract between the citizen and his state did not get the kind of attention it deserved from policymakers at the time of constitution-writing. Federalism was not exactly an ideological priority for Nepal’s main political parties. Even the Maoists who spoke the language of federalism during the civil war only did so to gain traction with the Madhesi communities. Indeed, the ‘strategic nature’ of Nepali Maoists’ support for federalism is comparable to that of the Russian Bolsheviks and Chinese Communists who used the idea of a federal arrangement as a stepping stone towards capturing state power[19]. Federalism was incorporated in the 2007 constitution only because the political parties feared that the Madhesi uprising endangered the country’s nascent democratic process[20].

Even between 2007 and 2015, when federalism became one of the most important issues on the constitutional agenda, the discussions on the subject were largely around just one issue – mapping of the provinces. CA members deliberated for long on issues such as the number of provinces, their names, capitals, and borders[21]. These were contentious issues, no doubt, the inability to resolve them led to the collapse of the first CA. The second CA did better, it produced a consensus on the number of provinces and their territorial boundaries. However, there was no agreement on the names and capitals of the provinces. Even today, four years since the promulgation of the Constitution and two years since the election of new federal, state and local representatives, four of the seven provinces don’t have official names and three have no permanent capital city[22].

Moreover, the narrow focus on provincial mapping at the constitution-writing stage meant that other issues relating to federalism, such as the critical business of inter-governmental relations, were ignored. As a result, when Nepal’s elected representatives took office in 2017, these found that there was no handbook, no standard operating procedures on how to govern. Hence, they are having to write up the rule books on the job. This is bound to be a difficult process, and it will, of course, have to contend with the push and pull of old unitary tendencies as well, no matter which party is in power.

This report was originally published at the Vivekananda International Foundation website. It has been republished after obtaining written approval from the organisation.